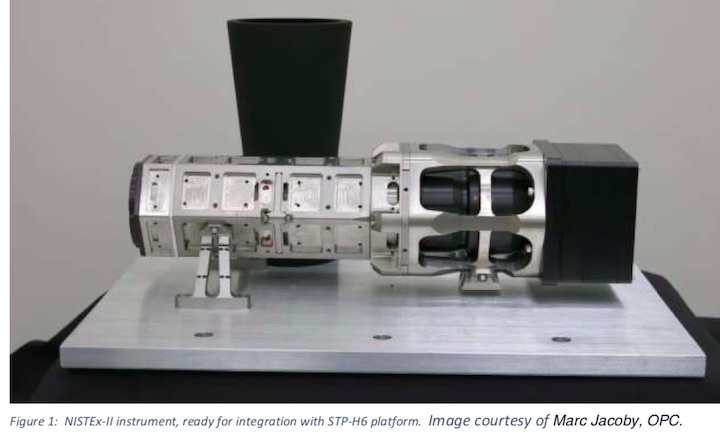 On May 4, 2019 the Navy Interferometric Star Tracker Experiment II (NISTEx-II) instrument, a joint project of the U.S. Naval Observatory (USNO) and NASA, was successfully launched into space aboard a Falcon 9 launch vehicle as part of SpaceX’sCommercial Resupply Service mission 17 (CRS-17). CRS-17 docked with the International Space Station (ISS) on May 6, 2019, and will stay docked for approximately one month as supplies and equipment are unloaded, and equipment that will be returned to Earth will be loaded. The NISTEx-II instrument (see Fig. 1) is USNO’s firstdedicated astrometric instrument flown in space.

The USNO team is led by Principal Investigator Dr. Rachel Dudik and Co-Investigators Dr. Greg Hennessy and Dr. Bryan Dorland. NASA will deploy and operate the instrument, with the observations planned and the data analyzed by members of the Astrometry Department at USNO. USNO anticipates data collection, processing and analysis to occur over the next six to twelve months, with the final results coming shortly thereafter.

NISTEx-II is an experimental high-performance star tracker, designed to demonstrate the ability of a grating lateral shear interferometer (LSI) to produce much higher accuracy astrometric results than standard instrumentation of similar size, weight, and power. It was built by the Optical Physics Company (OPC) as part of a USNO, PEO- Space Systems (PEO-SS), and NASA Space Test Program (STP) partnership. NISTEx-II will be deployed from the ISS as part of STP-H6, a dedicated platform hosting Department of Defense (DoD) STP payloads. A sister instrument, NISTEx-I, part of a USNO/PEO-SS program, will be flown next year aboard a dedicated free-flying satellite to be launched by the Air Force. The NISTEx payloads were ranked as the #1 Navy and#2 DoD space experiment payloads by the DoD’s Space Experiment’s Review Board(SERB) prior to their being manifested for flight.

The NISTEx-II hardware features a sun-shade at the front of the device, an optical shutter, interferometric components, housing for the StingRay custom designed optics, and an electronics processing and power interface using a radiation hardened BAE CIS1910 detector. This hardware also includes custom software developed to process interferometric measurements, to identify stars in the data, and to determine an inertial attitude based on measured star positions.

The lateral shearing angular period is designed to have a 200 micro-radian period, which gives a theoretical performance of 41 milli-arcseconds (mas) with near-zero inertial rates, and an accuracy of 206 mas at a slew rate of 1 degree per second. The hardware update rate is set to 1 Hz to ensure enough processing time is allotted to determine a solution. The optics are designed to provide a 10-degree field of view with a 20 mm aperture, which requires approximately 15 milliseconds of integration time to collect enough stellar photons. With a slew rate on the ISS platform of approximately 0.067 degrees per second and the parameters of the BAE detector, the margin for smear is 473%, which allows for longer integration times in case the conditions in orbit necessitate it.