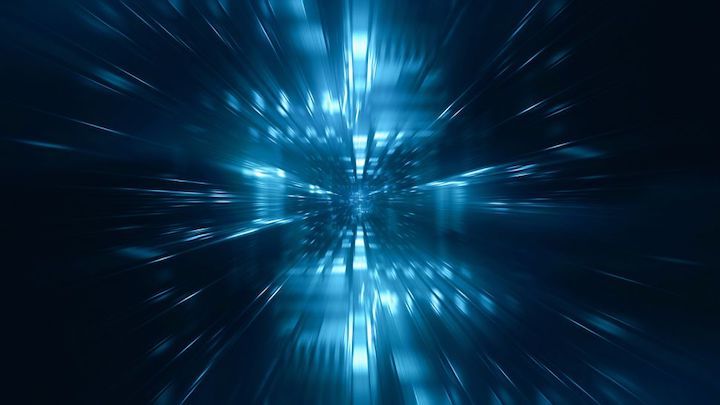 It may sound like the stuff of science fiction, but scientists have already detected a time warp. But what does this mean? Basically, a time warp is some phenomenon that changes the flow of time by speeding it up or making it run more slowly.

Physicists have known about time warps for over 100 years: In fact, you're standing on a kind of time warp right now.

In 1905, Albert Einstein published his theory of special relativity, followed a decade later by his sequel on general relativity, which stated that gravity is a property of the curving of space and time — the fabric of our universe. As a result, anything that has mass can warp time.

Naturally, bigger things warp time better. With masses billions of times larger than the sun, black holes have a lot of heft, which translates into a lot of time-warping potential. If you were to approach a black hole, the object's gravity would dilate time, making things happen much more slowly than they would when compared to an outside observer. However, a black hole wouldn't make a good time machine if you wanted to make a return trip: After passing a certain point called the event horizon, you and anything you bring with you can never come back out. Not even light (hence the name black hole).

The sun and Earth can also dilate time on noticeable scales. In 2007, a NASA satellite known as Gravity Probe B confirmed general relativity with 99% accuracy by observing how Earth distorts the space around it. As a further example, if you were living on a high mountaintop, you'd actually be aging faster than your friends by the sea where the pull of gravity is stronger, meaning time runs slower. Though to be fair, your accelerated aging would take place at an utterly imperceptible rate.

Time dilation can also be achieved by moving quickly. Moving faster can cause time to slow down relative to a stationary viewpoint, according to special relativity. This time warping due to speed and gravity shows up in our daily lives every time we use GPS on our phones to find our location.

Of course, massive objects warping time isn't exactly the kind of time travel that science fiction authors love to write about. So, are there other ways of warping time? Well, possibly, but it's not likely.

"The general consensus is that these really bizarre solutions of general relativity that include time machines are almost certainly impossible in the real universe," said Benjamin Shlaer, a research fellow in physics at the University of Auckland in New Zealand.

But there are a few options. Unlikely option number one is a wormhole, a theoretical bridge that matter and light could pass through and that's created from the curving of space. While some theories predict these existed at microscopic levels in the early universe, they also found that these wormholes were likely unstable and would have collapsed quickly.

In order for a wormhole to actually work for time travel, there would need to be some kind of exotic matter. To stabilize the wormhole, theory demands this type of exotic matter — an unknown form of matter fundamentally different than the stuff that makes up everything around you — would need to have negative mass and pressure, something scientists have never seen, nor expect to find anytime soon.

The second option involves cosmic strings. Cosmic strings are hypothetical tubes of energy that, if they exist, would be extremely tiny. Theory predicts that two strings speeding by each other could alter time in weird ways, like creating closed curves in space-time that could act like time machines. However, you'd need an infinite amount of energy to speed up these strings enough to see this effect — not exactly something you could do on a Saturday afternoon, or any afternoon for that matter.

If there is any hope of finding exotic matter or time warps in the future, they'll most likely be found through observational cosmology, which could come as new, unexpected discoveries, Shlaer said.

"It's pretty clear that all of our so-called safe assumptions about what actually exists are probably not true if you go to extreme regimes," Shlaer told Live Science. "And we could hope that these are questions we can ask and answer in the field of cosmology."

Astronomie - If There Were a Time Warp, How Would Physicists Find It?
« Zum vorherigen Eintrag Zum nächsten Eintrag »
2999 Views
Created with page4