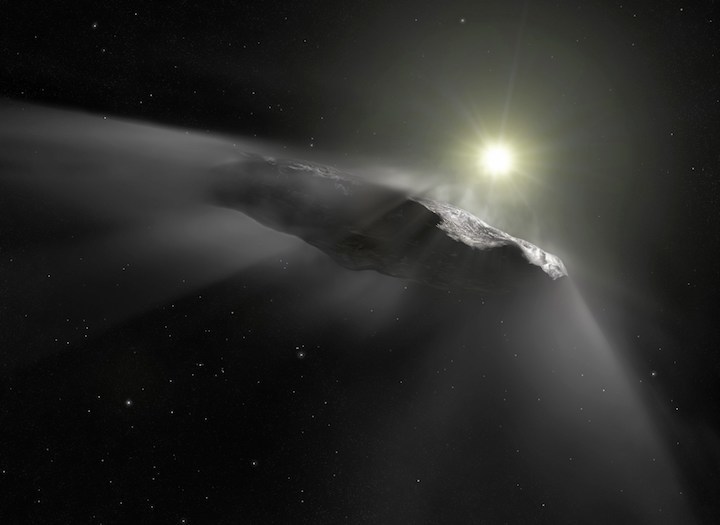 Are we truly earthlings? Is terra firma unequivocally the birthplace of humanity?

Maybe not. A new paper by a trio of Harvard University researchers argues that we all might be immigrants from deep space, brought to Earth via a mechanism called panspermia.

While the conventional wisdom from biologists has long been that life on Earth began on Earth, science fiction isn’t so fuddy-duddy. “Prometheus,” Ridley Scott’s 2012 prequel to the blockbuster “Alien” franchise, is one of many films positing that our planet was seeded by extraterrestrial life.

In the movies, aliens use some sort of engineered transportation system to get here — rockets or wormholes, for example. Panspermia makes no such technical demands. Here’s the basic idea: A meteor slams into a planet where life exists, and the collision lofts into space a microbe-containing dirt clod. The clod eventually slams into another world and infects it with life.

Many space scientists think panspermia could work within a solar system. For example, it’s possible that life arose on Mars more than 4 billion years ago and — thanks to panspermia — sent microbial emissaries to Earth, where they evolved into the flora and fauna you enjoy today.

But panspermia has long been seen as having limited reach. Even though microbes are tougher than cheap steak, it seems unlikely they would survive a journey between star systems. They’d be dead on arrival — indeed, dead before arrival — killed off by the radiation that permeates space and the lack of liquid water en route. And the odds that a germy dirt clod from one star system would actually hit a planet in another are comparable to the odds of downing a clay pigeon a trillion miles away.

Oumuamua changed things. When this cosmic visitor (scientists aren’t sure if the 700-foot-long object is a comet or an asteroid) sailed through our solar system last year, the Harvard scientists realized that large objects might be able to seed life over light-years of distance — even across the galaxy. This is possible, they suggest, because there are ways to accelerate the “bio-package” to velocities far greater than any dirt clod, and have it gravitationally captured by some other star system where it hangs around, eventually collides with a planet and delivers its protoplasm-filled package.

This game of catch would work best for double star systems. Roughly half of all the stars in the Milky Way have stellar buddies, and the gravitational fields in these systems are ever-changing. The systems occasionally slingshot asteroids, comets and even moons or planets into deep space at high speed. Double star systems are also adept at grabbing large objects coming their way. 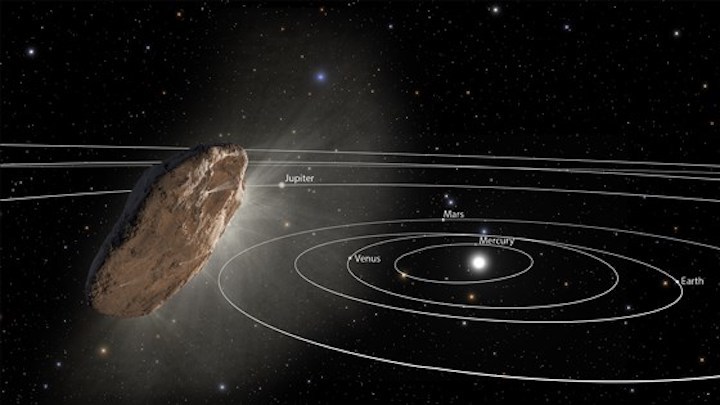 This artist's illustration shows Oumuamua racing toward the outskirts of our solar system.

After some deft mathematical calculations, the researchers concluded that there could be hordes of ejected asteroids, comets, moons and planets sailing the galaxy. They could cover interstellar distances in millions of years. That’s a long ride, but some bacteria are known to remain dormant and viable that long.

If this scenario is right, that report you got from Ancestry.com or 23andMe could be incomplete. Instead of being Bosnian or Bengali, your real ancestry might trace back to an as-yet-undiscovered planet. It would also imply that life is ubiquitous.

But it’s still unclear that life could really make such a trip. Rocco Mancinelli, a senior research scientist at NASA’s Ames Research Center, is among those who are skeptical that any bacteria could survive such a panspermian pilgrimage. “If the journey took millions of years, then that life would die and it doesn’t matter if it is Earth life or non-Earth life,” he said. “Why? Because it would be destroyed by cosmic radiation. And even if it could survive that, the radiation given off by the mineral in the rock itself would destroy it.”

Such objections aside, the idea of panspermia is perennially popular. Perhaps that’s because we want to see biology’s good news spread to as much of creation as possible. Then again, maybe it’s because we aren’t entirely happy with the idea that our distant ancestors were low-grade pond scum. It’s more gratifying to think that we have more exotic origins. If we’re not descended from the gods, at least we might be descended from ancestors on a planet far, far away.

Astronomie - Comets and asteroids may be spreading life across the galaxy Are germs from outer space the source of life on Earth?
« Zum vorherigen Eintrag Zum nächsten Eintrag »
2294 Views
Created with page4