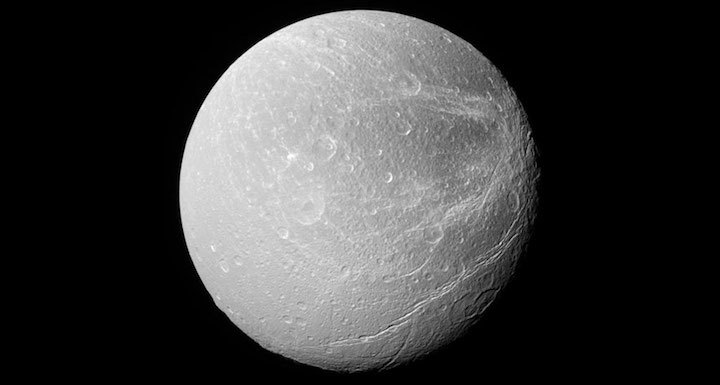 STRAIGHT AS AN ARROW  Saturn’s moon Dione is streaked with stripes that run parallel to the equator for hundreds of kilometers. No one knows what made them.

Saturn’s moon Dione is streaked with long bright stripes, and no one knows how they got there.

Planetary scientists first noticed the stripes in pictures taken with NASA’s Cassini spacecraft, which orbited Saturn from 2004 to 2017 (SN: 4/14/18, p. 6). Found near the moon’s equator, the long, thin, bright lines run surprisingly parallel to each other for tens to hundreds of kilometers. And the stripes seem unaffected by other features in the pocked and ridge-lined landscape, researchers report online October 15 in Geophysical Research Letters.

“They’re just really bizarre,” say study coauthor and planetary scientist Emily Martin of the Smithsonian National Air and Space Museum in Washington, D.C. “It’s really exciting when you see something really strange, and you’re just trying to figure out what the heck it could possibly be.”

Dione’s distinctive marks aren’t the only streaks in the solar system. So Martin and planetary scientist Alex Patthoff mapped the structures and compared them with straight lines found on other celestial bodies, including the Saturnian moon Enceladus, Earth’s moon and Jupiter’s moons Ganymede and Callisto to see if any of them could offer clues to the mysterious stripes.

The most famous stripes in the Saturn system are on icy moon Enceladus, which spews plumes of water from “tiger stripes” near the moon’s South Pole. Those stripes are thought to be cracks in the moon’s icy crust that open and close with gravitational pushes and pulls from Saturn and other moons, including Dione.

However, the tiger stripes are not as straight as Dione’s streaks, with kinks and twists that follow the underlying terrain.

“These things on Dione, you can literally take a ruler and line it up,” says Patthoff, of the Planetary Science Institute based in La Habra Heights, Calif. “We’ve never seen anything this straight and this linear anywhere, even on Earth.”

Our own moon sports long, linear grooves carved by rolling boulders. Those stripes are typically less than 10 kilometers long and have a distinctly scalloped shape. They also, of course, always run downslope.

Dione’s stripes must be caused by something else, Martin and Patthoff say, since they’re much longer, don’t seem to follow hills and are remarkably uniform in width across their whole lengths.

Jupiter’s moons Ganymede (above left) and Callisto (above right) have lines of pits or craters arranged in strangely straight rows, which planetary scientists call catena. They’re thought to form from a ripped-up comet. When a comet comes too close to Jupiter, the giant planet’s gravity can shred the comet into a stream of rocky debris. When Ganymede or Callisto’s orbits take them past the cometary remains, the debris can smack into the moons in a straight line.

But that’s not a good fit for Dione’s stripes, either — like the moon’s boulder tracks, catena are too short and scalloped.

So what’s going on with Dione?

Because Dione’s lines don’t seem to care about underlying topography, Martin and Patthoff think they were probably draped over the moon from the outside, rather than being evidence for some process inside Dione itself.

The duo isn’t sure where the material is from. One possibility is that it comes from Saturn’s rings, which are known to shed material onto Saturn itself in a constant “ring rain” (SN Online: 10/4/18).  Or the stripes could come from micrometeorite impacts kicking material off of two other moons that share Dione’s orbit, Helene and Polydeuces.

Depending on where the infalling material came from, the lines “could be pointing to an event in the Saturn system that we hadn’t previously known about,” Martin says.