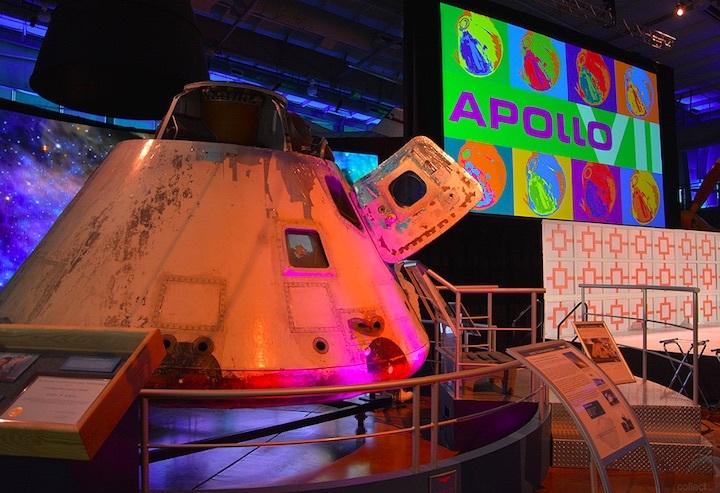 The Apollo 7 command module is festively lit nearby a presentation stage for the Apollo 7 50th anniversary celebration at the Frontiers of Flight Museum in Dallas, Texas on Oct. 20, 2018. (collectSPACE)

Walt Cunningham was hoping the parachutes had opened.

A member of the United States' first three-man space crew, Cunningham, together with Wally Schirra and Donn Eisele, were on their return to Earth 50 years ago Monday (Oct. 22), having spent the prior 11 days conducting the first piloted test of the Apollo spacecraft in orbit. All that stood between the Apollo 7 crew and the end to their mission was seeing their drogue and main parachutes deploy.

"We flew into overcast conditions," said Cunningham, recalling his re-entry into the atmosphere at a gala celebrating the 50th anniversary of the Apollo 7 mission held by the Frontiers of Flight Museum in Dallas on Saturday (Oct. 20) "We got down to about 22,000 feet and we couldn't see anything."

Judging by their rate of descent, Cunningham and his two crewmates figured their drogue chutes must have worked. But their situation remained unclear.

"Our three main chutes were to open at about 11,000 feet and we still could not see anything. We felt [the chutes deploy] a little bit, but we couldn't see how many had opened. So again we checked our watches and rate of descent, but we did not get out of the clouds to see our chutes until about 500 feet," said Cunningham.

As Cunningham is still around to attest (Eisele died in 1987; Schirra died in 2007), Apollo 7 landed safely, if not a bit off-kilter.

"It wasn't totally upside down, it was on its side," said Cunningham, describing his spacecraft's "Stable 2" orientation before balloons inflated to upright the capsule.

Lifted out of the Atlantic Ocean into a helicopter that would land them on the deck of the USS Essex aircraft carrier, Cunningham, Schirra and Eisele were in for one more surprise.

"One of the guys on the helicopter had a bottle a booze and offered us a drink," revealed Cunningham to both laughter and applause.

The guests at the Frontiers of Flight Museum — including eight of Cunningham's fellow astronauts — toasted his success on Saturday.

"Walt, congratulations on the 50th anniversary of the Apollo 7 mission. We have been talking about this for a few years and it's finally here and it is fabulous," said Cheryl Sutterfield-Jones, president and CEO of the museum.

Seated adjacent to the display of his command module, Cunningham regaled the audience with details of the Apollo 7 flight, prompted by the event's emcee, radio host Mark Davis.

"Fifty years ago this week, 50 years ago right now, Walt Cunningham, Wally Schirra and Donn Eisele, America's first three-man crew, were paving the path to the first moon landing that would happen less than a year later. At splashdown 50 years ago Monday, Apollo 7 was an unmitigated success," said Davis.

"It is really an honor to be here today on the 50th anniversary of one of the most important days of my life," said Cunningham. "Apollo 7 was a part of the one the most extraordinary achievements in our nation's history."

The first crewed mission of NASA's lunar landing program, Apollo 7 launched on a Saturn IB rocket from Cape Canaveral, Florida on Oct. 11, 1968, 19 months after a fire claimed the lives of the Apollo 1 crew atop the same launch pad. Cunningham, Schirra and Eisele had been the backup crew for the Apollo 1 astronauts.

"We thought, rightly or wrongly, that we could overcome all of the obstacles and that our goal was worth the risk," said Cunningham.

"We were not there for the fun of it, nor for the notoriety and certainly not for the money," he added. "During Apollo 7, I earned $660."

The mission confirmed that the Apollo command and service modules were capable and ready to support sending subsequent crews to the moon. Among the guests joining the gala Saturday were four of the 24 astronauts who made that journey: Bill Anders of Apollo 8, Thomas Stafford of Apollo 10, Charlie Duke of Apollo 16 and Harrison Schmitt of Apollo 17.

The evening event served as a fundraiser for the Frontiers of Flight's Exploration Space Initiative, which includes the museum's planned Space Flight Gallery that will open in phases beginning in 2019. The new exhibition will return to display an Apollo-recovered moon rock and feature a new interactive kiosk where guests, and particularly children, will be able to learn more about Cunningham.

"Walt Cunningham is a mandatory learning subject for kids in school," explained Sutterfield-Jones. "In Texas, we have something called the Texas Essential Knowledge and Skills and as part of those standards it says, 'learn something about Walt Cunningham.'"

During the gala, renowned portraiture artist Maceij Maga unveiled his latest work, a charcoal rendering of the Apollo 7 crew with their command module, which will be displayed near the capsule in the new space gallery.

The evening also included a tribute from Texas' Lieutenant Governor Dan Patrick, who with his wife served as the celebration's honorary chairs.

"Apollo 7 was a crucial flight," said Patrick. "Had Apollo 7 not gone as perfectly as it did, then we would not have made the timetable to land on the moon as President Kennedy set by the end of the decade. This flight, that capsule, Walt Cunningham, Wally and Donn paved the way for us." 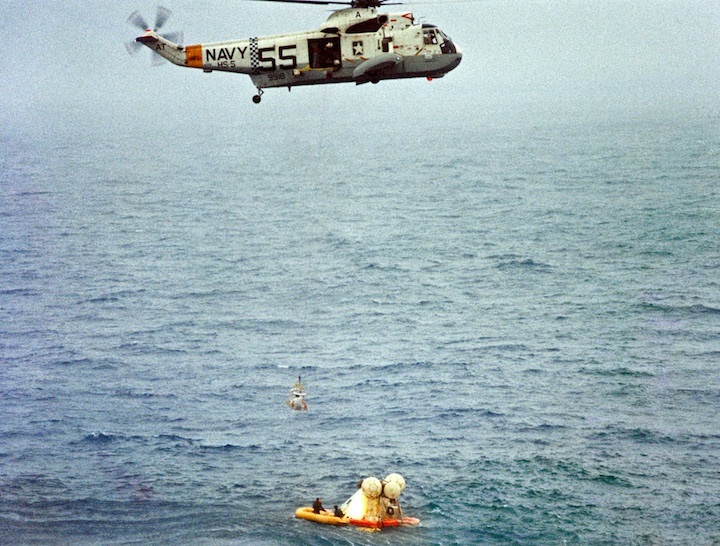 A U.S. Navy helicopter recovers the Apollo 7 crew of Wally Schirra, Donn Eisele and Walt Cunningham after their splashdown on Oct. 22, 1968. The 11-day flight tested the Apollo command and service modules in Earth orbit, paving the way to the moon. (NASA) 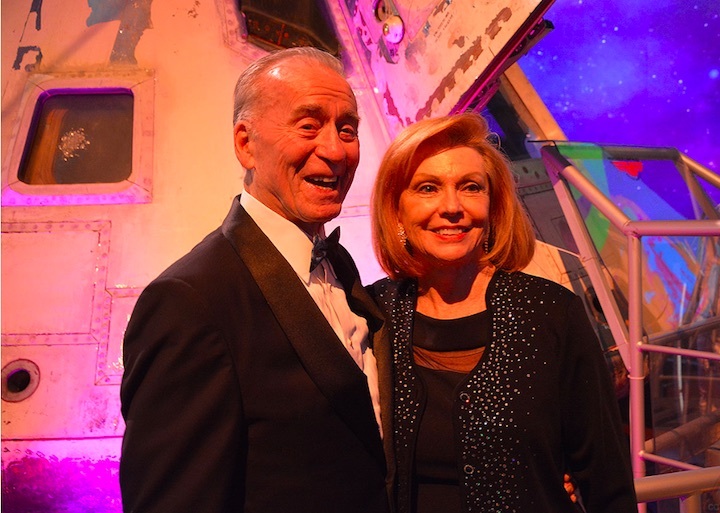 Walt Cunningham, with his wife Dot, pose in front of the Apollo 7 command module at the Frontiers of Flight Museum in Dallas on Saturday, Oct. 20, 2018. The couple were the guests of honor at a 50th anniversary gala for the Apollo 7 mission. (collectSPACE) 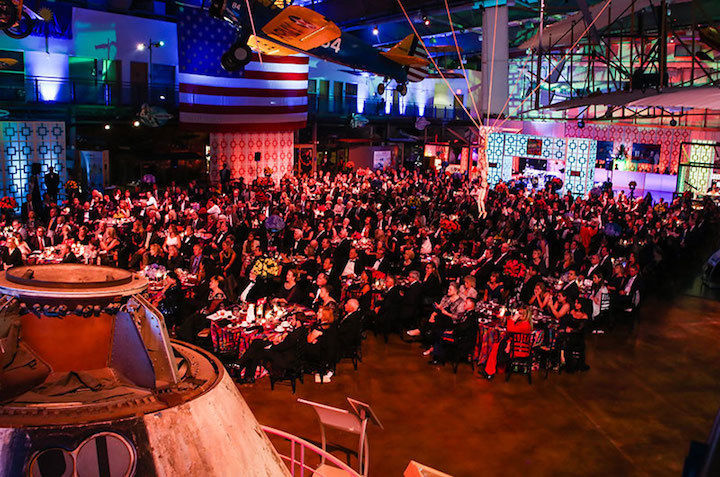 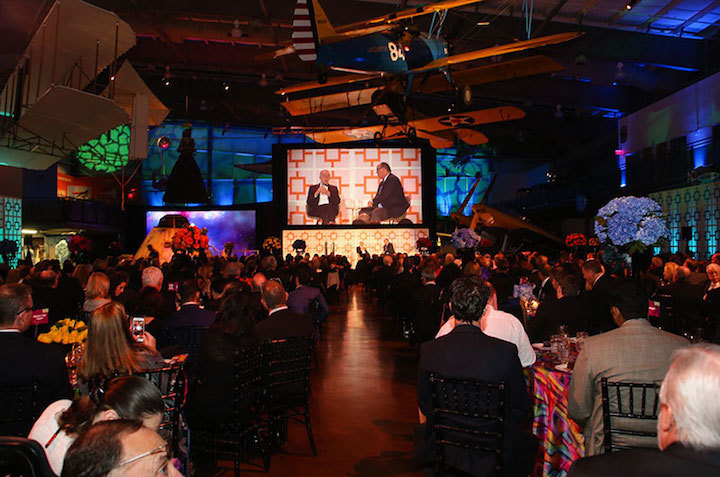 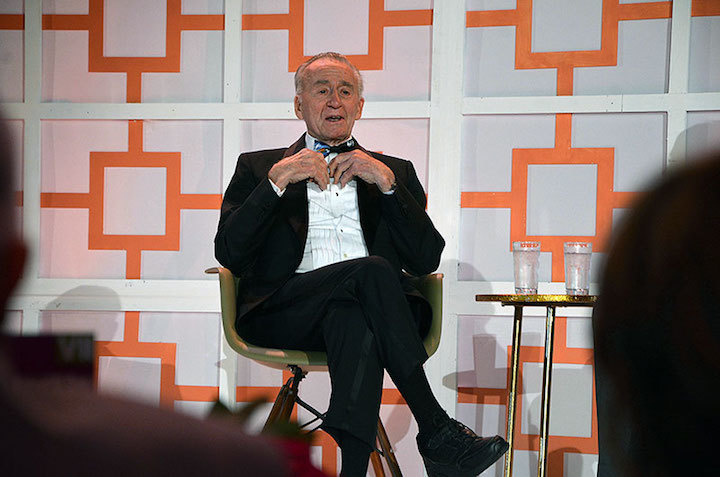 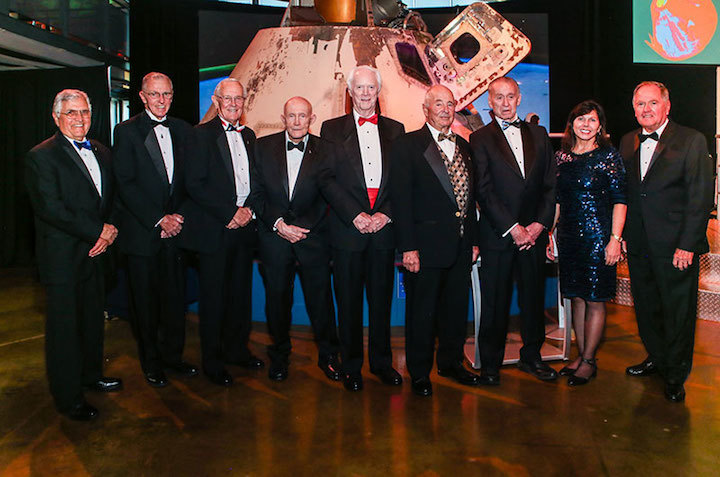 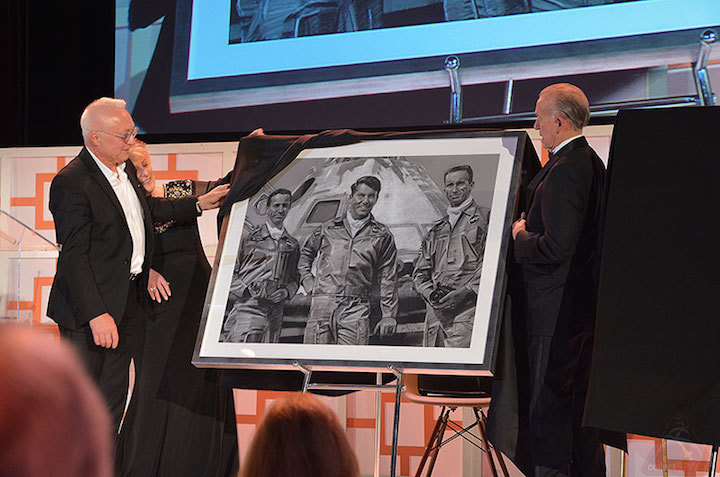