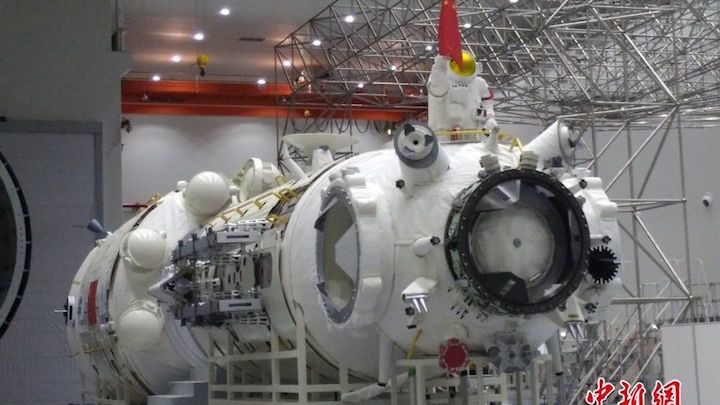 A 1:1 model of the Tianhe core module of the Chinese Space Station on October 23, 2018, to go on display at the Zhuhai Airshow in November. CNS

China will unveil a full size model of the Tianhe core module of the Chinese Space Station at an airshow in November, revealing details of the 20-metric-tonne spacecraft.

Seen in the image of the 16.6m-long Tianhe module is the wider, 4.2m-diameter resources compartment (left), the 2.8m-diameter life support and control section, and the docking hub (right), which will allow connection with further modules and visiting Shenzhou crewed spacecraft and Tianzhou cargo vessels.

The model will be open to the public at the Zhuhai Airshow in Guangdong Province, which runs from November 6-11 in south China.

Speaking at a human spaceflight conference in Xi'an, North China on Tuesday, Hao Chun, director of China Manned Space Engineering Office, said, "Currently, we are making steady progress in the space station research and construction. Key technological breakthroughs have been made in producing the three modules including the core capsule and the Long March-5B carrier rocket. Selection of the third batch of astronauts is also underway as scheduled," according to state media.

The Tianhe module will be the first of three 20-metric-tonne modules that will make up the Chinese Space Station (CSS), along with two experiment modules to be used for a range of science objectives.

Launch is scheduled for 2020, after a necessary successful test flight of the Long March 5B rocket being developed to launch the modules. This was delayed by the failure of the Long March 5 in July 2017, and a return-to-flight will be attempted in early 2019.

Tianhe, which means 'harmony of the heavens', was completed in the first half of 2017, but the high levels of secrecy - typical of China's space activities - mean that few images or details of the spacecraft have been available.

Footage of the Tianhe module under development at the Assembly, Integration and Testing (AIT) Center in Tianjin can be seen here.

Two experiment modules will be orbited and attached to Tianhe around 2021 and 2022, following intervening cargo and crewed missions, completing the orbital facility, though a co-orbiting optical module will later be launched.

In early October Yang Hong from the Institute of Manned Space System Engineering under the China Academy of Space Technology (CAST), a major spacecraft maker, stated that the basic T-shape for the planned three-module Chinese Space Station (CSS) could be extended to add three more modules and greatly increase the overall mass of the orbital outpost.

It was also announced this month that international teams have submitted 36 applications to send science payloads to the future orbital outpost under a joint United Nations-China initiative to open up the CSS to cooperation.

China officially approved its space station programme way back in 1992, when the country's economy was around 26 times smaller in GDP terms than today.

For an overview of the CSS and related plans see our article: What we know about China's space station: modules, crew, launch plans and more