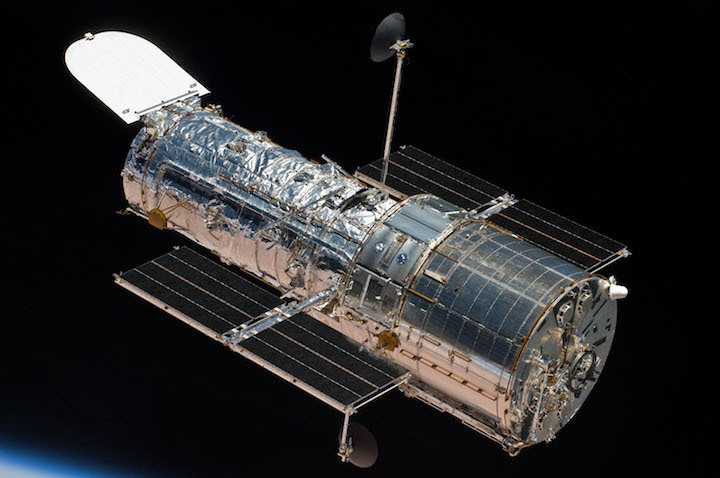 NASA took great strides last week to press into service a Hubble Space Telescope backup gyroscope (gyro) that was incorrectly returning extremely high rotation rates. The backup gyro was turned on after the spacecraft entered safe mode due to a failed gyro on Friday, Oct. 5. The rotation rates produced by the backup gyro have since reduced and are now within an expected range. Additional tests will be performed to ensure Hubble can return to science operations with this gyro.

A gyro is a device that measures the speed at which the spacecraft is turning, and is needed to help Hubble turn and lock on to new targets.

A wheel inside the gyro spins at a constant rate of 19,200 revolutions per minute. This wheel is mounted in a sealed cylinder, called a float, which is suspended in a thick fluid. Electricity is carried to the motor by thin wires, approximately the size of a human hair, that are immersed in the fluid. Electronics within the gyro detect very small movements of the axis of the wheel and communicate this information to Hubble’s central computer. These gyros have two modes — high and low. High mode is a coarse mode used to measure large rotation rates when the spacecraft turns across the sky from one target to the next. Low mode is a precision mode used to measure finer rotations when the spacecraft locks onto a target and needs to stay very still.

In an attempt to correct the erroneously high rates produced by the backup gyro, the Hubble operations team executed a running restart of the gyro on Oct. 16. This procedure turned the gyro off for one second, and then restarted it before the wheel spun down. The intention was to clear any faults that may have occurred during startup on Oct. 6, after the gyro had been off for more than 7.5 years. However, the resulting data showed no improvement in the gyro’s performance.

On Oct. 18, the Hubble operations team commanded a series of spacecraft maneuvers, or turns, in opposite directions to attempt to clear any blockage that may have caused the float to be off-center and produce the exceedingly high rates. During each maneuver, the gyro was switched from high mode to low mode to dislodge any blockage that may have accumulated around the float.

Following the Oct. 18 maneuvers, the team noticed a significant reduction in the high rates, allowing rates to be measured in low mode for brief periods of time. On Oct. 19, the operations team commanded Hubble to perform additional maneuvers and gyro mode switches, which appear to have cleared the issue. Gyro rates now look normal in both high and low mode.

Hubble then executed additional maneuvers to make sure that the gyro remained stable within operational limits as the spacecraft moved. The team saw no problems and continued to observe the gyro through the weekend to ensure that it remained stable.

The Hubble operations team plans to execute a series of tests to evaluate the performance of the gyro under conditions similar to those encountered during routine science observations, including moving to targets, locking on to a target, and performing precision pointing.  After these engineering tests have been completed, Hubble is expected to soon return to normal science operations.