The panel is waiting for the results of a spacewalk and the examination of the hole in the hull, be determined after October 30 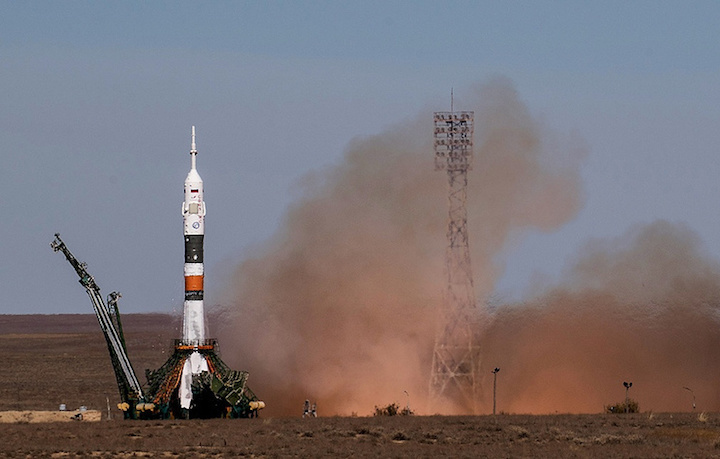 The special commission investigating the origin of the hole in the hull of the manned spacecraft Soyuz MS-09, attached to the International Space Station, keeps working in the original mode. The failed launch of the Soyuz-FG rocket on October 11 by no means affected its activities, the press-service of the space corporation Roscosmos told TASS on Monday.

"The panel of inquiry into the affair on the manned spacecraft Soyuz MS-09 keeps working. It is now waiting for the results of a spacewalk (and detained examination of the hole in the hull - TASS). Its date will be determined after October 30," Roscosmos said.

The inquiry into the causes of the hole in the hull of the Soyuz MS-09 spacecraft consists of specialists from the state-run corporation Roscosmos, the space rocket corporation Energia and TsNIIMash. The hole might have been caused by external factors (the impact of a meteorite or space debris, faulty workmanship or deliberate mechanical impact.

On August 30, a drop in air pressure occurred on board the ISS. The crew identified a two-millimeter hole in the hull of the Soyuz MS-09 spacecraft attached to the ISS. In the evening of the same day it was patched with several layers of epoxy resin. The pressure returned to normal.

Originally, a spacewalk for examining the outer surface of Soyuz MS-09 was scheduled for November 15. Roscosmos chief Dmitry Rogozin said that Russian cosmonauts would remove part of the anti-meteorite protective cover and examine the hole from the outside. The failed launch of the Soyuz-FG rocket on October 11 delayed the spacewalk.

A Soyuz-FG launch vehicle carrying the manned spacecraft Soyuz MS-10 failed shortly after blastoff from the Baikonur space site in Kazakhstan on October 11. It was to deliver to the ISS Roscosmos’s Alexei Ovchinin (Soyuz MS-10 commander) and NASA’s astronaut Nick Hague. None of them was hurt. It was the first such emergency after launch in 35 years.

Earlier, a source in the space rocket industry told TASS that the panel of inquiry investigating the causes of the aborted launch of Soyuz-FG believed problems with separation of the rocket’s first stage were to blame. A final report and a list of recommendations following the loss of the Soyuz-FG rocket and manned spacecraft Soyuz MS-10 would be approved on October 30.

The date for the current crew of the International Space Station (ISS) to return to Earth and the launch of a new expedition will be determined after the probe of the Soyuz-FG incident is completed, State Space Corporation Roscosmos told TASS on Monday.
"The date for the landing of the current crew and the launch of the next expedition, as well as the date for a spacewalk [to inspect a hole in the hull of the manned Soyuz MS-09 spacecraft docked to the ISS] will be determined after the commission probing the Soyuz-FG booster incident completes its work, i.e. after October 30," Roscosmos said.
The cosmonauts who will make a spacewalk will also be determined after October 30, the Roscosmos press office said.
Some media outlets earlier reported citing a source in Russia’s space industry that Russian cosmonauts Sergei Prokopyev who is currently working on the ISS and Oleg Kononenko who will reportedly fly to the orbital outpost on December 3 may make a spacewalk to inspect a hole in the hull of the manned Soyuz MS-09 spacecraft on December 10-11.
Currently, US astronaut Serena Aunon-Chancellor and astronaut of the European Space Agency Alexander Gerst are working on the space station jointly with Russian cosmonaut Prokopyev. As the Cosmonaut Training Center told TASS, there are no plans to change the composition of the next crew, which is expected to comprise Kononenko, NASA astronaut Anne McClain and astronaut of the Canadian Space Agency David Saint-Jacques.
Roscosmos Executive Director for Manned Programs Sergei Krikalyov earlier said that the Russian space agency planned to hold three unmanned launches of rockets by the end of the year before the next manned launch.
A source in the Russian space industry said on Monday that the first launch of a Soyuz-FG rocket after the October 11 incident is preliminarily scheduled for November 18. This will be the launch of a Progress MS-10 resupply ship, the source said.
Soyuz aborted launch
A Soyuz-FG carrier rocket with a manned Soyuz MS-10 spacecraft blasted off from Kazakhstan’s Baikonur Cosmodrome to the International Space Station (ISS) on October 11. On board the spacecraft were Russian cosmonaut Alexei Ovchinin (the commander of the Soyuz MS-10) and NASA astronaut Nick Hague.
Following a smooth liftoff, the Soyuz’s booster malfunctioned between the first and second stages of separating, whereupon the crew was forced to abort the flight and switch to ballistic descent. The manned Soyuz MS-10 spacecraft ended up landing in the Kazakh steppe.
The press office of Russia’s Central Military District reported that rescuers recovered the crew from the descent capsule. Later, the crewmembers were examined and found to be in good condition. After their medical check-up in the town of Baikonur, the astronauts were transported to Moscow.
This is the first emergency landing with this type of carrier rocket over the past 35 years.
NASA astronaut Nick Hague, who returned to Moscow from the Baikonur spaceport on October 12 after the Soyuz booster’s failure, flew to the United States on October 13.
Soyuz hull damage
On August 30, a drop in air pressure was registered on the ISS. The crew examined the compartments and add-on modules one by one to identify a two-millimeter hole in the hull of the Soyuz MS-09 spacecraft attached to the orbital outpost. In the evening of the same day it was patched up with several layers of epoxy resin. Pressure returned to normal. On August 31 the crew reinforced the patch with another layer of sealant.
Roscosmos Chief Dmitry Rogozin said the Soyuz MS-09 spacecraft had been damaged with a drill from the inside. The space rocket corporation Energia is conducting an investigation to identify those responsible. Inquiries are being made into who had access to the spacecraft, what works were carried out, and who supervised them.
A spacewalk to examine the hole in the Soyuz MS-09 spacecraft’s hull was earlier scheduled for November 15.