In October 2018, we're launching the Ionospheric Connection Explorer, or ICON, to study Earth's dynamic interface to space. Its combination of remote and in situ measurements will help scientists better understand this region — and how it changes in response to both space weather from above and terrestrial weather from below, a dynamic mix that can affect our communications, satellites and astronauts.

Though the ICON spacecraft zooms around Earth at upwards of 14,000 miles per hour, its wind-measuring instrument MIGHTI can detect changes in wind speed smaller than 10 miles per hour. MIGHTI makes use of the Doppler effect — the same phenomenon that makes an ambulance siren change pitch as it passes you — and measures the tiny shifts in color caused by the motion of glowing gases in the upper atmosphere, which reveals their speed and direction.

ICON circles Earth in just over an hour and a half, completing nearly 15 orbits per day. Its orbit is inclined by 27 degrees, so over time, its measurements will completely cover its zone of interest near the equator.

ICON doesn't carry any onboard fuel. Instead, its single solar panel — measuring about 100 inches long and 33 inches wide, a little bit bigger than a standard door — produces power for the spacecraft. In science mode, ICON draws about 209-265 Watts of power.

The idea for ICON was selected for further study in 2011, and the team has been hard at work ever since.

How much does good science weigh? In ICON's case, about as much as vending machine. The observatory weighs 634 pounds altogether.

5 snapshots per minute from FUV

Because ICON travels so fast, its Far Ultraviolet instrument takes eight snapshots per second of passing structures. This avoids blurring the images and captures the fine detail scientists need. But ICON's bandwidth only allows FUV to send 5 images per minute, so the instrument uses a de-blurring technique called time-delay integration to combine 12 seconds' worth of data into a single image.

ICON orbits about 360 miles above Earth, near the upper reaches of the ionosphere — the region of Earth's atmosphere populated by electrically-charged particles. From this vantage point, ICON combines remote measurements looking down along with direct measurements of the material flowing around it to connect changes throughout this region. 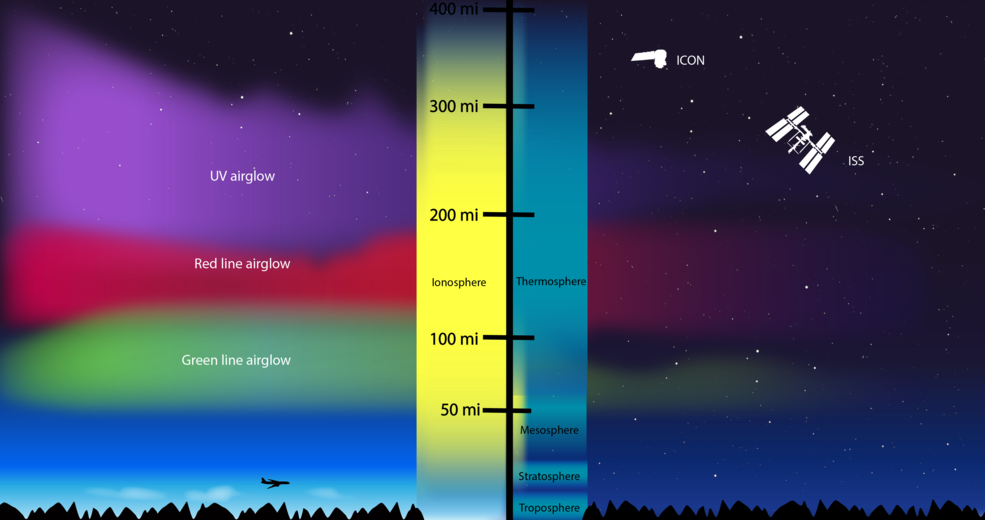 NASA's ICON mission will orbit above the upper atmosphere, through the bottom edge of near-Earth space. Here it will be able to observe how interactions between terrestrial weather and a layer of charged particles called the ionosphere creates changes in the space environment — including bright swaths of color in the atmosphere called airglow.
Credits: NASA's Goddard Space Flight Center/ICON

NASA's GOLD mission — short for Global-scale Observations of the Limb and Disk — launched aboard a commercial communications satellite on Jan. 25, 2018. From its vantage point in geostationary orbit over Brazil, GOLD gets a full-disk view of the same region of space that ICON studies, helping scientists connect the big picture with the details.

1 gigabit of data per day

Together, ICON's instruments produce and downlink about 1 gigabit of data per day — about 125 megabytes. This adds up to about 1 gigabyte per week. ICON produces 10 different data products, ranging from measurements of wind speeds and ionospheric density to more complex models, that will help scientists shed new light on this ever-changing region.