Spring on Triton lasts 40 years, but it’s far from dull. 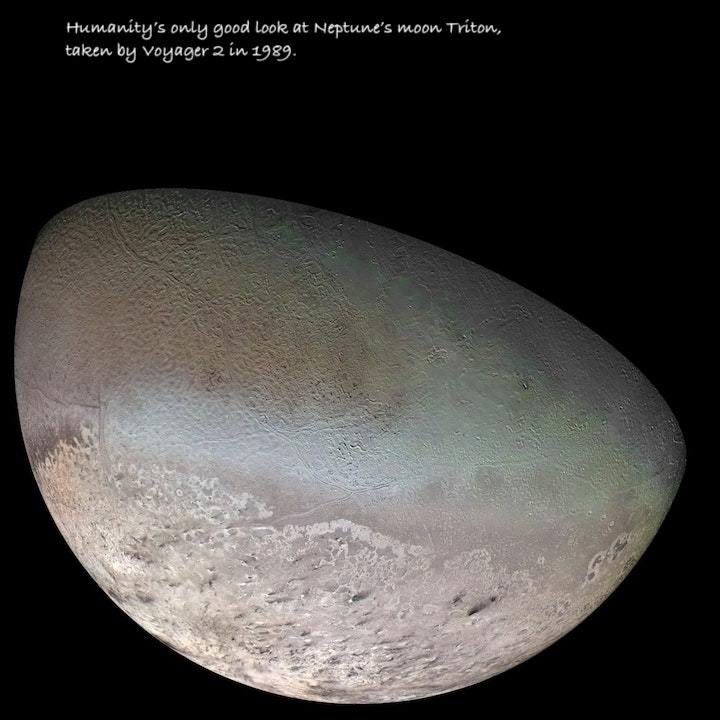 Scientists using a small telescope in Southern California are detecting seasonal changes on Neptune’s giant moon Triton, which was first observed in detail by the Voyager 2 spacecraft.

When Voyager flew by Triton in 1989, it observed a large icecap of nitrogen and methane ices spreading outward from the south pole, Bonnie Buratti of NASA’s Jet Propulsion Laboratory (JPL) in Pasadena, California, recently told a meeting of the American Astronomical Society’s Division for Planetary Sciences in Knoxville, Tennessee, US.

But Voyager merely provided a snapshot of the moon. To look for changes, Buratti says, you have observe repeatedly, from Earth.

That’s particularly important for Triton, she adds, because it, like Neptune, only orbits the Sun once every 165 years — meaning that a single season is more than 40 years long.

When Voyager passed by, it was late spring in the southern hemisphere. Now, it’s mid-summer.

Although Triton is more than 30 times farther from the sun than is the Earth, and receives barely more than 0.1% as much sunlight, the materials in its icecap have extremely low freezing points. At high summer, when the midday sun is directly above some parts of the icecap, there is thus still enough heat to cause these ices to sublimate into Triton’s tenuous atmosphere (which is 70,000 times thinner than that of the Earth).

Once aloft, these vapours migrate north, with some travelling beyond the ice to deposit in large patches of frost at its northern edge.

The first indication that this was happening came in 2005, Buratti says, when the Hubble Space Telescope spotted two bright areas, presumably frost, north of the icecap.

But it doesn’t require the Hubble to track these changes. Using a 60-centimetre instrument at JPL’s Table Mountain observatory, in Big Pines, California, she and a group of undergraduate students observed how Triton’s brightness changes during the course of its 141-hour day, as different parts of it rotate toward us. They then converted the resulting “light curve” into a longitude-by-longitude map of its average brightness.

“You can get a lot of information from a pinpoint of light,” Buratti explains.

Her team found that the bright areas discovered by Hubble were continuing to brighten. It also found another area, at a different longitude, that had now also started to brighten, indicating a new area of frost deposition.

“We think we are seeing frost being transported from the polar cap up to the equator,” she says. “Eventually it may be transported up towards the northern pole.”

Is Triton an ocean world?

Not that she expects to live long enough to see the pole emerge from its long, dark winter. Northern summer won’t arrive until 2091. “Future generations of astronomers will have to show us that,” she says.

Triton, she adds, isn’t the only outer solar system world on which such things may be happening. All that’s needed, she says, is a fairly large world with a strong axial tilt.

The tilt is what causes the seasons. The size is what gives the body enough gravity to retain an atmosphere, however tenuous, in which vapours can be transported.

For example, she says, there is a 2326-kilometre dwarf planet called Eris out beyond Pluto, only slightly smaller than Triton’s 2670 kilometres. And it isn’t the only such object. Several others might also be large enough.

Similar processes might also occur on Pluto, Buratti says, but Pluto’s active geology has both distracted planetary scientists from looking for them and may make them hard to detect.

Meanwhile, she says, watching Triton’s surface change in the 39 years since Voyager flew by is broadening our understanding of planetary processes.

“It is moving the whole idea of seasons and volatile transport from Mars and Earth to the outer Solar System,” she says. “It also tells us about the evolution of the atmospheres on these objects.”