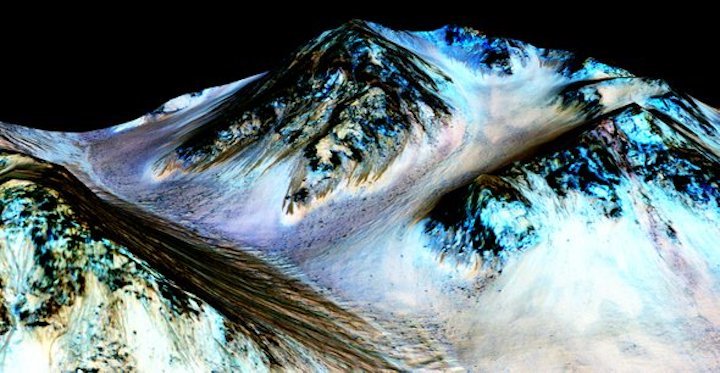 Flowing brines are one possible cause of dark streaks seasonally observed on Martian slopes, such as these seen at Hale Crater. A new study suggests that some brines at or near the Martian surface could be enriched with oxygen. This image was produced using stereo observations and topographical information from the HiRISE instrument aboard NASA’s Mars Reconnaissance Orbiter. Credit: NASA, JPL-Caltech and University of Arizona

The possibility of life on Mars may not be consigned to the distant past. New research suggests our neighboring world could hide enough oxygen in briny liquid water near its surface to support microbial life, opening up a wealth of potentially habitable regions across the entire planet. Although the findings do not directly measure the oxygen content of brines known to exist on the Red Planet, they constitute an important step toward determining where life could exist there today.

Aerobic respiration, which relies on oxygen, is a key component of present-day life on Earth. In this process, cells take in oxygen and break it down to produce energy to drive metabolism. Mars’s very low levels of atmospheric oxygen have led many scientists to dismiss the possibility of aerobic respiration there today, but the new research brings this possibility back into play. The study appears in the October 22 edition of Nature Geoscience.

"Our work is calling for a complete revision for how we think about the potential for life on Mars, and the work oxygen can do, implying that if life ever existed on Mars it might have been breathing oxygen," says lead study author Vlada Stamenkovic, a researcher at NASA's Jet Propulsion Laboratory in California. "We have the potential now to understand the current habitability."

Although Mars is today a freeze-dried desert, it possesses abundant reserves of subsurface water ice, as well as some amount of liquid water in the form of brines. The brines’ high salt content lowers the temperature at which they freeze, allowing them to remain liquid even on Mars’s frigid surface. In their new study, Stamenkovic and his colleagues coupled a model of how oxygen dissolves in brines with a model of the Martian climate. Their results revealed that pools of salty liquid at or just beneath the surface could capture the meager amounts of oxygen from the Red Planet’s atmosphere, creating a reservoir that microbes might metabolically utilize. According to the research, Martian brines today could hold higher concentrations of oxygen than were present even on the early Earth—which prior to about 2.4 billion years ago harbored only trace amounts of the gas in its air.

The study analyzed how slow shifts in Mars’s tilt in relation to the sun (a well-studied phenomenon still unfolding today) would change the planet’s average temperature, examining a slice of time spanning from 20 million years in the past to 10 million years in the future. This analysis showed that associated temperature changes across these lengthy periods of time could allow brines to absorb and retain oxygen from the thin Martian air.

And while the model-based results might seem quite speculative, they do align with otherwise- mysterious in-situ findings on Mars. NASA's Curiosity rover has identified rocks rich in the element manganese, which likely required significant oxygen to form. "Manganese deposition on Earth is really closely associated with life, both indirectly and directly," says Nina Lanza, a planetary geologist at Los Alamos National Research Laboratory in New Mexico. However, that does not mean Martian life created the manganese deposits; instead, it could simply be that Mars possessed much more atmospheric oxygen in the past than it does today—something supported by several other independent lines of evidence.

An oxygen-rich ancient Mars, in turn, would necessitate a thicker atmosphere—possibly thick enough to have allowed oceans of water to accumulate on the surface. That is the Martian history most researchers currently embrace, based on a wealth of observations from multiple missions.

But Stamenkovic says an ocean, an oxygen-rich atmosphere, or a warmer climate may not be required to create the deposits. It is also possible that the brines interacting with the rocks over millions of years could have formed manganese-rich rocks and could still create them today, eliminating the need for Mars to once have had Earth-like oceans and atmosphere. Lanza agrees that the manganese-rich rocks could have formed on an ocean-free Mars, but notes that further study is needed.

Steve Clifford, an expert in Martian hydrology at the Planetary Science Institute in Arizona who was not part of the project, is not ready to count out the role of oceans in forming Mars’s brines. "You need the presence of water to have these brines," he says. Clifford points out that whatever water survives on Mars today—and researchers think there is enough to cover the entire surface with water at least half a kilometer if not a full kilometer deep—requires even more to have existed in earlier times, essentially assuring the Red Planet’s somewhat watery past.

Regardless of how Mars’s brines came to be, their existence and possible oxygenation suggest a potent, heretofore overlooked planetary niche for past and even present-day life. “The question of extant life is something that we might solve if we had the right tools on Mars,” Stamenkovic says. “Looking for liquid water and brines in the Martian subsurface would be the first step; drilling would be another critical step.”

But just because the brines might hold on to oxygen does not necessarily mean they constitute a planet-spanning refuge for any Martian microbes. For one thing, Stamenkovic and his colleagues have not yet modeled the brines’ actual formation or stability over time; instead they simply looked for regions in which the salty liquid could exist, based on measured Martian atmospheric pressures and a range of average annual estimated temperatures. Brines would require saltier conditions to form at the equator, which would cause them to absorb less oxygen and become less suitable habitats—but polar brines would be able to absorb enough oxygen to potentially support a wider variety of life forms, according to the study.

However, according to Edgard Rivera-Valentin, it would be difficult for salts near the surface to absorb water vapor from Mars’s atmosphere to make the brine in the first place—a process known as deliquescence. Rivera-Valentin, a planetary scientist at the Texas-based Lunar and Planetary Institute who was not part of the study, says deliquescence is challenging even at the planet’s poles. There water vapor is more abundant than at the equator, thanks to the presence of ice caps, but it is still scarce in the atmosphere due to freezing temperatures.

Instead, Rivera-Valentin says equatorial brines are more likely to form as subsurface water comes in contact with salt-rich minerals, rather than from salts interacting with atmospheric water vapor. According to Clifford, water-rock interactions throughout the planet are more likely to happen deep beneath the surface, where groundwater can dissolve the rocks around it while remaining isolated from the atmosphere for billions of years. "In the near-surface, it’s a little bit harder to anticipate what the composition of brines would be or how saturated they would be," Clifford says. Rivera-Valentin also expressed concern that the brines might be too salty for life. “The types of brines that would form on Mars would kill it,” he says. “Life as we know it on Earth would not be able to survive these brines—too salty and too cold.”

Woodward Fischer, a geobiologist at the California Institute of Technology and a co-author on the paper, says that to find the salty limit of life, one would have to know something about the energy budget of a cell. “We barely know that in certain very specific instances of laboratory [microbes] on Earth, and we have no idea [about it] on any other planet,” he says. Fischer thinks scientists should avoid overly rigid constraints when it comes to imagining how alien, unearthly life might emerge and evolve.

If in fact briny, biologically friendly oases dot the Red Planet, they paradoxically could be bad news for future life-hunting missions there, rendering wide swaths of the planet potentially habitable—and thus off-limits for in-situ exploration, based on current interpretations of international law. Planetary protection protocols require stringent decontamination methods for spacecraft that land near “special regions” deemed likely to hold the conditions necessary for life—namely, the presence of a usable energy source and of liquid water. These protocols seek to prevent the accidental extinction or contamination of possible Martian life by invading microorganisms from Earth, and are also meant to keep our own planet safe from any Martian bugs that might someday hitch a ride to Earth on future sample-return missions. Presumably, if the bulk of the Martian surface and subsurface were to suddenly be seen as a “special region,” exploration could still occur there via robots somehow completely purged of all potentially contaminating traces of Earthly biology.

Such strict requirements would drive up the already high cost of Martian exploration, but Stamenkovic remains optimistic. “I think there's a sweet spot where we can be curious and we can be explorers and not mess things up,” he says. “We have to go for that.”

Mars-Chroniken - Oxygen-Rich Liquid Water May Exist on Mars Brines suffused with the life-giving gas could offer hope for past and even present microbes on the Red Planet, according to a new study
« Zum vorherigen Eintrag Zum nächsten Eintrag »
2127 Views
Created with page4