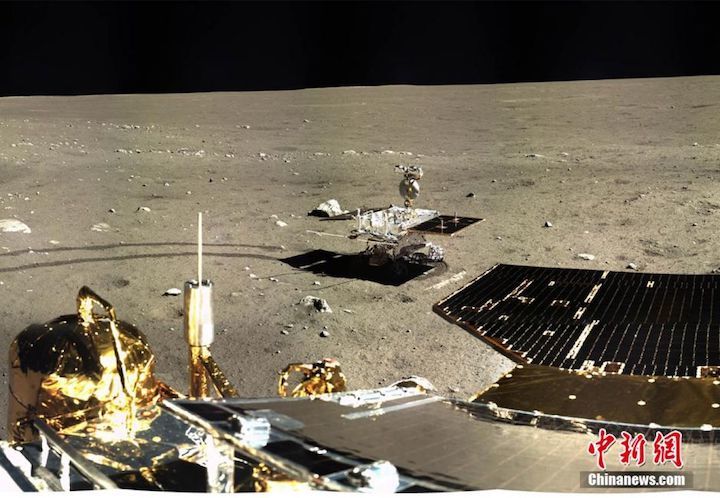 A video from the National Astronomical Observatories of China gives an impression of how a month (lunar day and night) appears to Chang'e-3 spacecraft situated on Mare Imbrium.

The footage, illustrating September 2014, shows the Sun and planets moving along the ecliptic, while also showing the phases of the Earth as seen from the Moon.

The phases of the Earth and Moon appear to be the reverse of the other. With the Sun at its zenith, marking a full Moon as seen from from the Earth, the Earth is completely in shadow from the Moon's perspective.

The Sun, Earth and Moon are in a line at this time, and sometimes bring about lunar eclipses as seen from Chang'e-3. The following month saw a total lunar eclipse, during which Chang'e-3 would have taken advantage of the unique conditions with its Lunar Ultraviolet Telescope.

An image of the Pinwheel galaxy captured by the ultraviolet telescope on the Chang'e-3 Moon lander. Chinese Academy of Sciences

Across the month, the Sun is seen to rise for 14 days and then sets, leaving 14 days of darkness. During the periods of darkness the Chang'e-3 lander—which is apparently still operational—and rover, which ceasedoperating mid-2016, would automatically enter a sleep mode.

While the Earth is seen spinning rapidly, the motion of the Moon is slow. The Moon is tidally locked to the Earth, meaning the time taken for the Moon to rotate about its axis is the same as it takes to orbit the Earth, and means the same side of the Moon always faces the Earth.

As EarthSky notes, the Moon appears to rise and set as seen from Earth not because of the Moon’s motion – but because Earth spins once a day on its axis. Because one side of the Moon always faces us, from most places on the Moon, Earth doesn’t appear to rise or set. Instead, from a given point on the Moon’s near side, Chang'e-3 would always see Earth hanging in the sky.

China's Yutu ("Jade Rabbit") rover on the Moon's Mare Imbrium, as pictured by the Chang'e-3 lunar lander, seen in the foreground. CNS

Lunar far side landing next

Chang'e-4, China's repurposed back-up to Chang'e-3, will attempt the first ever soft-landing on the far side of the Moon, which always faces away from Earth, in December.

To allow this mission, a relay satellite has been sent into an orbit beyond the Moon to facilitate communications between the ground and the lunar far side spacecraft, with direct communications being impossible.

Chang'e-4, also featuring a lander and rover, is currently expected to launch around December 8 with the landing to follow late in the month.

An image of the Moon and distant Earth downloaded from Longjiang-2/DSLWP-B on October 10, 2018. Harbin Institute of Technology

On this day (October 24) in 2007, China launched its first Moon mission, Chang'e-1, a lunar orbiter. Another orbiter, Chang'e-2, launched in 2010, followed by the first lunar soft-landing since the 1970s with Chang'e-3 in December 2013. Next year China will move to the next stage with the Chang'e-5 lunar sample return mission.