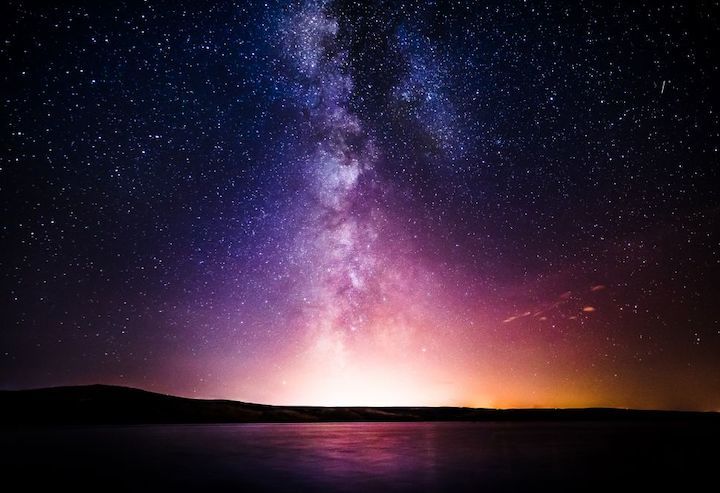 There's a "dark impactor" blasting holes in our galaxy. We can't see it. It might not be made of normal matter. Our telescopes haven't directly detected it. But it sure seems like it's out there.

"It's a dense bullet of something," said Ana Bonaca, a researcher at the Harvard-Smithsonian Center for Astrophysics, who discovered evidence for the impactor.

Bonaca's evidence for the dark impactor, which she presented April 15 at the conference of the American Physical Society in Denver, is a series of holes in our galaxy's longest stellar stream, GD-1. Stellar streams are lines of stars moving together across galaxies, often originating in smaller blobs of stars that collided with the galaxy in question. The stars in GD-1, remnants of a "globular cluster" that plunged into the Milky Way a long time ago, are stretched out in a long line across our sky.

Under normal conditions, the stream should be more or less a single line, stretched out by our galaxy's gravity, she said in her presentation. Astronomers would expect a single gap in the stream, at the point where the original globular cluster was before its stars drifted away in two directions. But Bonaca showed that GD-1 has a second gap. And that gap has a ragged edge — a region Bonaca called GD-1's "spur" — as if something huge plunged through the stream not long ago, dragging stars in its wake with its enormous gravity. GD-1, it seems, was hit with that unseen bullet.

"We can't map [the impactor] to any luminous object that we have observed," Bonaca told Live Science. "It's much more massive than a star… Something like a million times the mass of the sun. So there are just no stars of that mass. We can rule that out. And if it were a black hole, it would be a supermassive black hole of the kind we find at the center of our own galaxy."

With no giant, bright objects visible zipping away from GD-1, and no evidence for a hidden, second supermassive black hole in our galaxy, the only obvious option left is a big clump of dark matter. That doesn't mean the object is definitely, 100%, absolutely made of dark matter, Bonaca said.

"It could be that it's a luminous object that went away somewhere, and it's hiding somewhere in the galaxy," she added.

But that seems unlikely, in part due to the sheer scale of the object.

But it's hard to entirely rule out a luminous object, in part because the researchers don't know how fast it was moving during the impact. (It may have been moving very fast, but not quite as heavy as expected — a true dark bullet — Bonaca said. Or it could have been moving more slowly but been very massive — a sort of dark hammer.) Without an answer to that question, it's impossible to be certain where the thing would have ended up.

Still, the possibility of having found a real dark matter object is tantalizing.

Right now, researchers don't know what dark matter is. Our universe seems to act like the luminous matter, the stuff we can see is just a small fraction of what's out there. Galaxies bind together as if there's something heavy inside them, clustered in their centers and creating enormous gravity. So most physicists reason that there's something else out there, something invisible. There are lots of different opinions as to what it's made of, but none of the efforts to directly detect dark matter on Earth have yet worked.

This dense ball of unseen something plunging through our Milky Way offers physicists a new scrap of evidence that dark matter might be real. And it would suggest that dark matter is really "clumpy," as most theories about its behavior predict. [Beyond Higgs: 5 Elusive Particles That May Lurk in the Universe]

So far, Bonaca's discovery is one of a kind, so new that it hasn't yet been published in a peer-reviewed journal (though it was met appreciatively by the crowd of physicists at the prestigious conference).

To pull it off, she relied on data from the Gaia mission, an European Space Agency program to map billions of stars in our galaxy and their movements across the sky. It formed the best existing catalog of the stars that seem to be part of GD-1.

Bonaca buttressed that data with observations from the Multi Mirror Telescope in Arizona, which showed which stars were moving toward Earth, and which were moving away. That helped distinguish between stars that were really moving with GD-1, and those that just sat next to it in Earth's sky. That effort produced the most precise image ever of GD-1, which revealed the second gap, the spur, and a previously unseen region of the stellar stream.

Down the road, Bonaca said, she wants to do more mapping projects to reveal other regions of the sky where something unseen seems to be knocking stars around. The goal, she said, is to eventually map clumps of dark matter all across the Milky Way.

Astronomie - Something Strange Punched a Hole in the Milky Way. But What Exactly Is It?
« Zum vorherigen Eintrag Zum nächsten Eintrag »
1918 Views
Created with page4