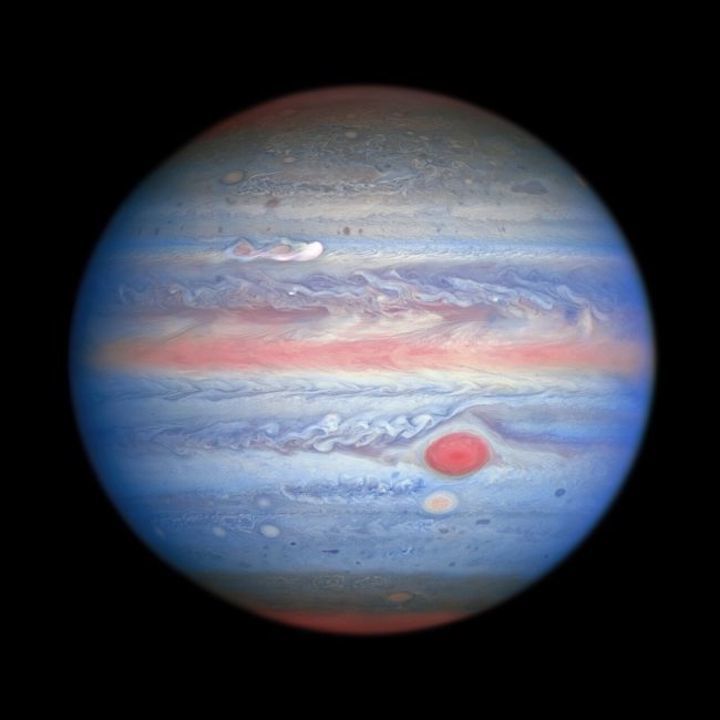 The image, captured on Aug. 25, combines data in ultraviolet, visible and near-infrared light to give researchers a new look at Jupiter, one that could reveal insights about the gas giant's thick atmosphere.

"In this photo, the parts of Jupiter’s atmosphere that are at higher altitude, especially over the poles, look red as a result of atmospheric particles absorbing ultraviolet light," Hubble team members wrote in a description of the photo, which was released on Thursday (Sept. 17). "Conversely, the blue-hued areas represent the ultraviolet light being reflected off the planet."

The white storm in the upper left portion of the image, which first boiled up on Aug. 18, "is grabbing the attention of scientists in this multiwavelength view," Hubble team members wrote. "The 'clumps' trailing the white plume appear to be absorbing ultraviolet light, similar to the center of the Great Red Spot, and Red Spot Jr. directly below it. This provides researchers with more evidence that this storm may last longer on Jupiter than most storms."

Hubble, a joint project of NASA and the European Space Agency, launched to Earth orbit aboard the space shuttle Discovery in April 1990. Scientists soon realized that the big scope had a flaw in its primary mirror, which spacewalking astronauts fixed in December 1993.

Astronauts maintained and upgraded Hubble on four additional servicing missions after that, the last of which occurred in 2009. As the new Jupiter photo shows, the telescope is still giving astronomers and the public amazing views of the cosmos, three decades after its launch.