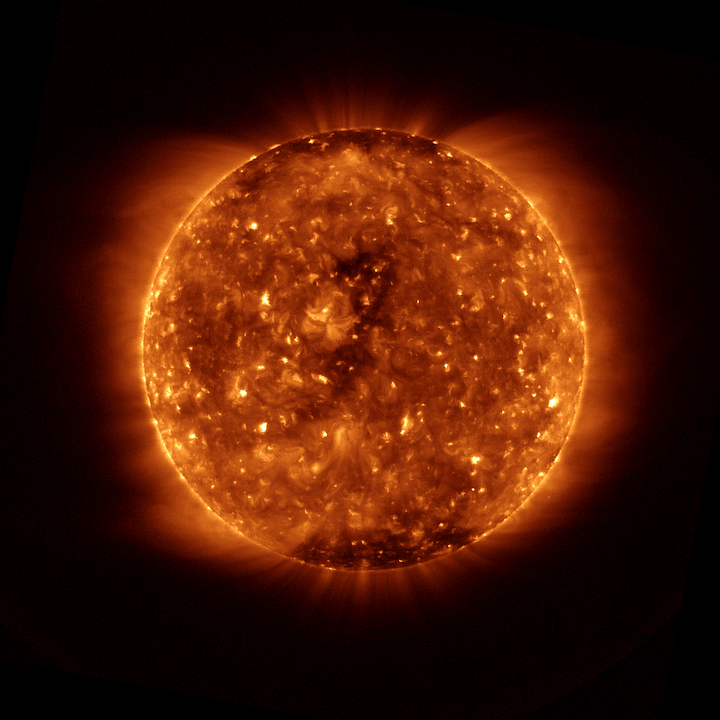 Analysis determines we are in Solar Cycle 25

September 15, 2020 - The solar minimum between Solar Cycle 24 and 25 - the period when the sun is least active - happened in December 2019, when the 13-month smoothed sunspot number fell to 1.8, according to the Solar Cycle 25 Prediction Panel, co-chaired by NOAA and NASA. We are now in Solar Cycle 25 with peak sunspot activity expected in 2025, the panel said.

Solar Cycle 24 was average in length, at 11 years, and had the 4th-smallest intensity since regular record keeping began with Solar Cycle 1 in 1755. It was also the weakest cycle in 100 years. Solar maximum occurred in April 2014 with sunspots peaking at 114 for the solar cycle, well below average, which is 179.

Solar Cycle 24’s progression was unusual. The Sun’s Northern Hemisphere led the sunspot cycle, peaking over two years ahead of the Southern Hemisphere sunspot peak. This resulted in solar maximum having fewer sunspots than if the two hemispheres were in phase.

Solar Cycle 25
For the past eight months, activity on the sun has steadily increased, indicating we transitioned to Solar Cycle 25. Solar Cycle 25 is forecast to be a fairly weak cycle, the same strength as cycle 24. Solar maximum is expected in July 2025, with a peak of 115 sunspots.

“How quickly solar activity rises is an indicator on how strong the solar cycle will be,” said Doug Biesecker, Ph.D., panel co-chair and a solar physicist at NOAA’s Space Weather Prediction Center. “Although we’ve seen a steady increase in sunspot activity this year, it is slow.”

The panel has high confidence that Solar Cycle 25 will break the trend of weakening solar activity seen over the past four cycles. “We predict the decline in solar cycle amplitude, seen from cycles 21 through 24, has come to an end,” said Lisa Upton, Ph.D., panel co-chair and solar physicist with Space Systems Research Corp. “There is no indication we are approaching a Maunder-type minimum in solar activity.”

“While we are not predicting a particularly active Solar Cycle 25, violent eruptions from the Sun can occur at any time,” Biesecker added.

Solar cycle prediction gives a rough idea of the frequency of space weather storms of all types, from radio blackouts to geomagnetic storms and solar radiation storms. It is used by many industries to gauge the potential impact of space weather in the coming years.

New satellites will provide enhanced observations of the Sun
In 2024, before the peak of sunspot activity in Solar Cycle 25, NOAA is slated to launch a new spacecraft dedicated to operational space weather forecasting. NOAA’s Space Weather Follow-On L-1 observatory will be equipped with instruments that sample the solar wind, provide imagery of coronal mass ejections, and monitor other extreme activity from the Sun in finer detail than before. NOAA’s next Geostationary Operational Environmental Satellite (GOES-U) is also scheduled to launch in 2024. GOES-U will carry three solar monitoring instruments, including the first compact coronagraph, which will help detect coronal mass ejections. Enhanced observations of the Sun from these satellites will help improve space weather forecasting.

The Solar Cycle Prediction Panel forecasts the number of sunspots expected for solar maximum, along with the timing of the peak and minimum solar activity levels for the cycle. It is comprised of scientists representing NOAA, NASA, the International Space Environment Services, and other U.S. and international scientists.