Dart rocket, which is just 3.4m long, is part of Australia’s $7bn investment in space technologies 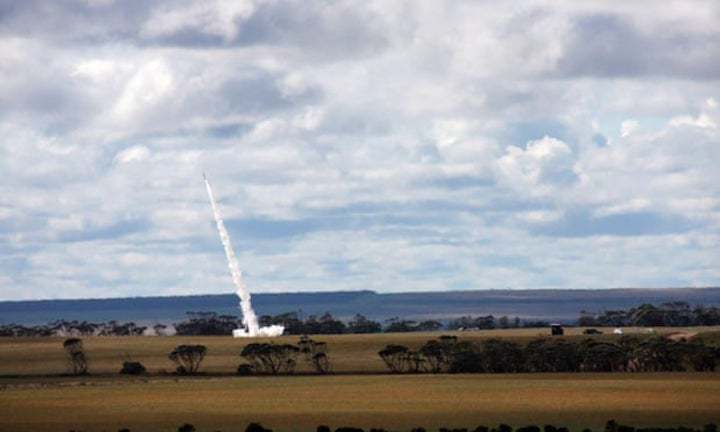 The Dart rocket, which was launched from the Koonibba rocket range in South Australia on Saturday.Photograph: Sean Jorgensen-Day/DEWC Systems

A small commercial rocket has been launched from Australia to the edge of space for the first time.

The Dart rocket, carrying an air force radio prototype, was launched from the Koonibba rocket range in South Australia on Saturday.

At just 3.4m long and 34kg, the commercial rocket is a fraction of the size of rockets launched by Nasa and will travel up to 100km into the atmosphere.

The launch is part of the air force’s Plan Jericho – an advanced sensing program to detect and track challenging targets that has also seen a high-altitude balloon launched to the edge of space.

The defence industry minister, Melissa Price, said the launch marked the start of an exciting future for Australia’s space capability.

“The rocket is unlike any rocket ever launched in Australia, and is part of what is known as ‘new space’ technologies – small rockets carrying reduced sized satellites using commercially available technologies,” she said.

On Tuesday, when the first attempt to launch the rocket misfired, the South Australian premier, Steven Marshall, said the rocket launch would be the first commercial one in Australia.

The federal government is investing $7bn in increasing Australia’s space capabilities over the next decade.