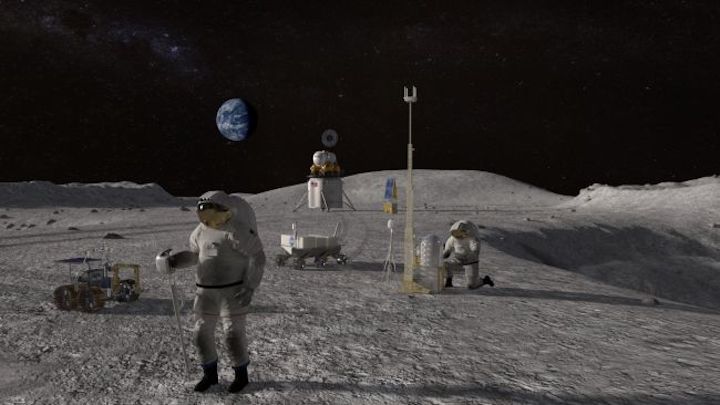 An artist's depiction of astronauts working on the moon.
(Image: © NASA)

For 18 months, NASA has focused on landing astronauts in 2024 near the moon's south pole, but that last piece of the directive may need to take a back seat if executing the mission gets too tricky, agency officials say.

"For the first mission, Artemis 3, our objective is to get to the south pole," Bridenstine said. "But … it would not surprise me if, for example, if we made a determination that the south pole might be out of reach for Artemis 3, which I'm not saying it is or isn't," interest in the Apollo sites may win out.

NASA's current push to the moon began in March 2019, when Vice President Mike Pence directed the agency to accelerate its timeline for returning humans to the moon by targeting a 2024 landing at the south pole. That region is intriguing for wouldbe explorers because it hides water ice in dark craters where sunlight can never quite reach.

Ice can be turned into drinking water, breathable air and rocket fuel — at least, theoretically; scientists aren't sure yet how much ice is there and how easy it would be to process. But the hoped-for resource has made the moon's south pole a priority destination. It's a particularly hyped target in the context of developing a sustainable presence at the moon, which is, more precisely, a presence that would be sustained by the moon itself.

But now, it seems, NASA is preparing for the possibility it will need a back-up plan. The lunar poles are more difficult to reach than the equatorial regions are, so it may turn out that if the agency hits roadblocks, it could salvage the 2024 deadline by substituting a simpler landing site.

And if the agency is focused on the moon's equatorial region, a handful of sites immediately pop out as intriguing: the six Apollo landing sites, where astronauts explored between 1969 and 1972.

"The question is, OK, if you're going to go to the equatorial region again, how are you going to learn the most? And you could argue that you'll learn the most by going to the places where we put gear in the past," Bridenstine said. "There could be scientific discoveries there."

And revisiting an Apollo landing site would have impacts beyond science, Bridenstine said. "Just the inspiration of going back to an original Apollo site would be pretty amazing as well," he said. "And establishing norms of behavior — we want to make sure that those sites are protected forever, so I think there's opportunity there as well."

On Wednesday (Sept. 16), Kathy Lueders, the associate administrator for the Human Exploration and Operations directorate seemed to underscore that the south pole landing site was no longer set in stone, according to SpacePolicyOnline.com reporting on a Washington Space Business Roundtable event.

"We're really looking at a bunch of different options for making a decision," SpacePolicyOnline.com reported Lueders said. "We're looking at different ways to get more communities to participate in that decision. We know that … wherever the initial missions are is a big interest and so we're actually trying to find a way to get more … participation in this. So, more to come."

Raumfahrt - The 1st Artemis astronauts on the moon may not visit the lunar south pole after all, NASA says
« Zum vorherigen Eintrag Zum nächsten Eintrag »
767 Views
Created with page4