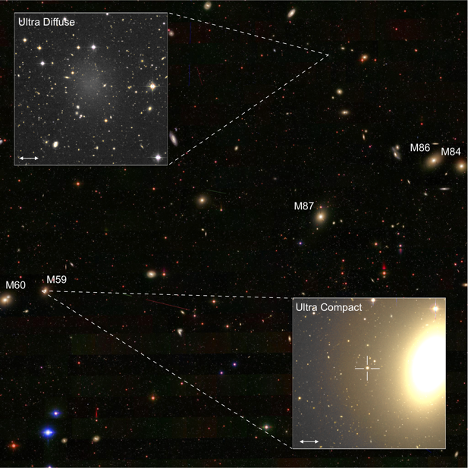 A wide field view of the central region of the Virgo Cluster, measuring 4.4 million light years on each side, from the Sloan Digital Sky Survey. Some of Virgo's brightest member galaxies are labeled, including Messier 87, or M87, which is located close to the cluster center. Insets show deep images of two structurally extreme galaxies, taken with the MegaCam instrument on CFHT as part of the Next Generation Virgo Cluster Survey. An ultra-compact dwarf is within the crosshairs in the lower inset, while an ultra-diffuse galaxy is featured in the upper inset. These galaxies are nearly a thousand times fainter than the bright galaxies visible on this image. Although the compact and diffuse galaxies contain roughly the same number of stars, and their total brightness is similar, they differ in area by a factor of more than 20,000. The scale bars in each inset represent a distance of 10,000 light years.
Image credits: Sloan Digital Sky Survey, Canada-France-Hawaii Telescope and the NGVS team.

Astronomers have found that the key to understanding galaxies with "extreme" sizes, either small or large, may lie in their surroundings. In two related studies, an international team found that galaxies that are either "ultra-compact" or "ultra-diffuse" relative to normal galaxies of comparable brightness appear to reside in dense environments, i.e., regions that contain large numbers of galaxies. This has led the team to speculate that these "extreme" objects could have started out resembling normal galaxies, but then evolved to have unusual sizes through interactions with other galaxies.

The team identified both ultra-compact and ultra-diffuse galaxies as part of an unprecedented census of galaxies residing in the nearby Virgo cluster. The investigation used data from the Next Generation Virgo Cluster Survey (NGVS) obtained at the Canada-France-Hawaii Telescope (CFHT) using MegaCam, a wide-field, optical camera. At a distance of 50 million light years, Virgo is the galaxy cluster nearest to the Milky Way, and contains several thousand member galaxies, the majority of which are revealed, for the first time, in the NGVS data.

Astronomers discovered ultra-compact dwarf galaxies (UCDs) a quarter century ago, and they are the densest known galaxies in the Universe. Competing theories describe UCDs as either large star clusters, or as the remnants of larger galaxies that have been stripped of their stellar envelopes.

"We found hundreds of UCDs in the nearby Virgo galaxy cluster, and at least some of them appear to have started their lives as larger galaxies," said Dr. Chengze Liu of Shanghai Jiao Tong University, lead author of the first study.

While UCDs are similar in appearance to a large star cluster, a number of UCDs in this study were found with faint stellar envelopes surrounding the central, compact core. These envelopes could be the last remnants of a galaxy that has gradually been stripped away by gravitational tidal forces from neighboring galaxies. Additionally, UCDs were found to inhabit preferentially the regions of the Virgo cluster with the highest galaxy densities. Together, these pieces of evidence point to an environmentally-induced transformation as being responsible for producing some UCDs.

Ultra-diffuse galaxies (UDGs) are a mystery at the other end of the size spectrum. They are much larger, and more diffuse, than typical galaxies with similar brightness. Some theories suggest that UDGs are massive galaxies whose gas --- the fuel for their star formation --- was removed before many stars could form. Others suggest that they were once normal galaxies that have been made more diffuse through mergers and interactions.

"We found that the ultra-diffuse galaxies in the Virgo cluster are more concentrated toward the dense cluster core, indicating that a dense environment may be important for their formation," said Dr. Sungsoon Lim of the University of Tampa, and the lead author of the second study. "The diversity in their properties indicate that while no single process has given rise to all objects within the UDG class, at least some UDGs have appearances suggesting their diffuse nature is due to tidal interactions or to the merger of low-mass galaxies."

Another mystery is that some ultra-diffuse galaxies were found to contain significant populations of globular star clusters. "The intense star-forming events needed to make globular clusters generally make a galaxy less, rather than more diffuse, so understanding how we get globular clusters in ultra-diffuse galaxies is an interesting challenge," said Prof. Eric Peng of Peking University's Kavli Institute for Astronomy and Astrophysics, and co-author on both studies.

"To find galaxies that are truly unusual, you first need to understand the properties of so-called normal galaxies," said Dr. Patrick Côté of the National Research Council of Canada’s Herzberg Astronomy and Astrophysics Research Center, and an author on both studies. "NGVS provides the deepest, most complete look at the entirety of the Virgo cluster galaxy population, allowing us to find the most compact and most diffuse galaxies, advancing our understanding of how they fit into the general picture of galaxy formation."

These research results have been presented in two papers that were published recently in the Astrophysical Journal ( Lim et al. 2020; Liu et al. 2020).

NGVS is based on observations obtained with MegaPrime/MegaCam, a joint project of the Canada-France-Hawaii Telescope and CEA/DAPNIA, and on data produced and hosted at the Canadian Astronomy Data Centre. CFHT is operated by the National Research Council of Canada, the Institute National des Sciences de l'Universe of the Centre National de la Recherche Scientifique of France, and the University of Hawai’i.