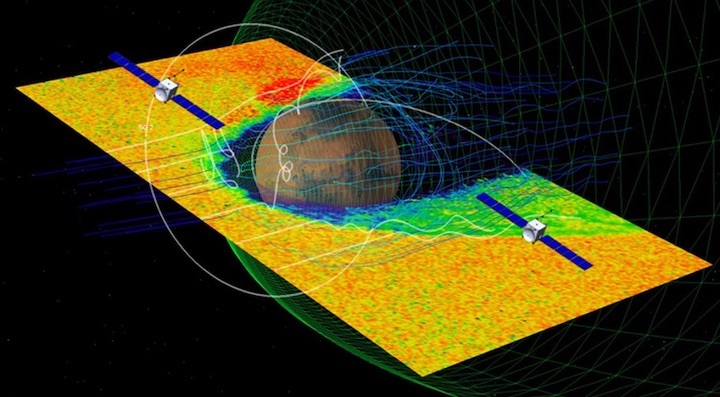 WASHINGTON — A smallsat mission to study the atmosphere of Mars is looking for a new ride after being removed as a secondary payload on the launch of a NASA asteroid mission.

The Escape and Plasma Acceleration and Dynamics Explorers, or EscaPADE, mission, was one of three smallsat missions selected by NASA in 2019 for initial studies as part of the agency’s Small Innovative Missions for Planetary Exploration (SIMPLEx) program. EscaPADE features twin spacecraft that would orbit Mars to study how the planet’s atmosphere interacts with the solar wind, and how those processes lead to the escape of gases from the atmosphere.

NASA announced in February that EscaPADE and Janus, an asteroid mission also selected under the SIMPLEx program, would launch as secondary payloads on the Falcon Heavy launch of the Psyche mission in July 2022. EscaPADE would be dropped off when Psyche flew past Mars in 2023 on its way to the asteroid Psyche in the main asteroid belt.

However, at a Sept. 14 meeting of the Lunar Exploration Analysis Group, Lori Glaze, director of NASA’s planetary science division, said those plans had changed. “They were going to launch on the Psyche mission but are now going to be remanifested on different flight, yet to be determined,” she said of EscaPADE.

She did not elaborate on the reason for removing EscaPADE from the launch, and said the mission had just completed its preliminary design review. A confirmation review, which sets cost and schedule targets for missions, has been postponed to at least next spring.

NASA spokesperson Karen Fox said Sept. 17 that a switch in launch vehicles led to the decision to take EscaPADE off the mission. “Psyche was originally planned to launch on a Falcon 9 Full Thrust, but it was ultimately determined that the performance of a Falcon Heavy was needed for Psyche to get to the required orbit,” she said.

The switch to the Falcon Heavy, she said, allowed Psyche to optimize its trajectory needed to arrive at its destination. “This trajectory is not optimal for a mission with the goal of Mars capture and orbit, as EscaPADE is required to do, and would have required EscaPADE into an extended cruise phase to get into its correct orbit,” Fox said.

NASA attempted to accommodate EscaPADE but was unable to do so, and decided at the mission’s preliminary design review in August to extend its development timeline “in order to focus on maturing the design.”

It wasn’t clear when the switch from a Falcon 9 to a Falcon Heavy was made. The February NASA announcement of the contract to SpaceX for the Psyche mission said it would launch on a Falcon Heavy.

Fox said that the Science Mission Directorate’s rideshare office, which matches missions seeking launch with those that have excess payload capacity, will work to find a new launch opportunity for EscaPADE. That may be difficult, though, given the limited number of missions either going to Mars or in the vicinity of Mars in the near future.

The other two SIMPLEx missions are proceeding. Janus, a pair of smallsats that will visit two binary asteroids, recently completed both its preliminary design review and confirmation review. It is still scheduled to launch with the Psyche mission.

The third SIMPLEx mission is Lunar Trailblazer, a smallsat mission to orbit the moon and map water ice there. Glaze said Lunar Trailblazer is scheduled to go through its preliminary design review in October and confirmation review in November. It will fly in 2024 as a secondary payload on the launch of NASA’s Interstellar Mapping and Acceleration Probe (IMAP) spacecraft.