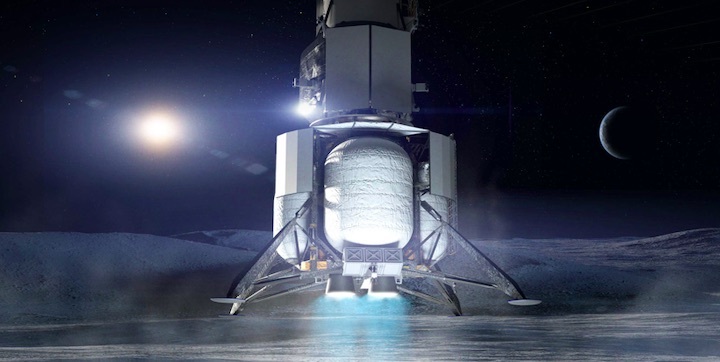 The Human Landing System (HLS) National Team, led by Blue Origin with partners Lockheed Martin, Northrop Grumman, and Draper, has completed its System Requirements Review (SRR). SRR is the first program “gated milestone,” which marks the successful baselining of the requirements for the mission, space vehicles, and ground segment. The design proceeded to the NASA Certification Baseline Review (CBR), followed by the lower-level element SRRs, and the preliminary design phase.

The National Team also closed with NASA on the 37 NASA design and construction standards. The Blue Origin-led team had an aggregate total of 62 design and construction standards spread across the three partners that comprised the integrated lander, aiding in the rapid progress expected by NASA’s Human Landing System program. In addition, hundreds of health and human performance standards and requirements were agreed upon and closed.

“Completion of this review allows the National Team to move forward in its design, much of which is evolving directly from existing systems such as Orion, and that maturity was exhibited in the review,” said Lightfoot. “The National Team has been working together seamlessly in its journey to return Americans to the Moon and the magnitude of the mission is on our minds daily.”

“Opening the Moon for exploration and business is one step closer after completion of the SRR,” said Brent Sherwood, vice president of Advanced Development Programs at Blue Origin. “Achieving major milestones is the surest way to measure progress toward our first landing.”

“A complex undertaking like human lunar landings requires paying attention to thousands of details, and thinking through every likely contingency,” said former U.S. Senator Harrison Schmitt, Apollo 17 Lunar Module Pilot and lunar scientist, and a member of the Blue Moon Science Advisory Board. “I was very impressed at the depth of engineering and operational sophistication shown in the Systems Requirements Review. The National Team is working to directly apply the lessons from the Apollo experience to make America's next crewed lunar landing successful and the precursor to sustained human activity on the Moon.”

About the National Team