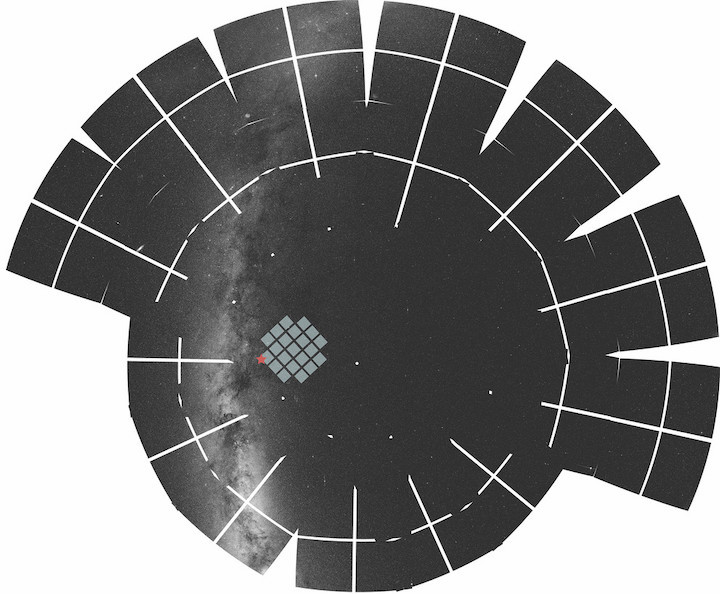 A panorama of NASA’s TESS observations of the northern ecliptic hemisphere, showing that the star TOI-1899, indicated by a star symbol, lies just outside of the original field for NASA’s Kepler space mission (squares on the panorama) and is close to the plane of the Milky Way. A planet orbiting the star, dubbed TOI-1899 b, was detected by the TESS mission after 2 months of observation and is the fifth Jupiter-sized planet transiting a low-mass star. Of these five Jupiter-sized planets, TOI-1899 b is the only one with a long orbital period (~29 days).

UNIVERSITY PARK, Pa. – A planet observed crossing in front of, or transiting, a low-mass star has been determined to be about the size of Jupiter. While hundreds of Jupiter-sized planets have been discovered orbiting larger sun-like stars, it is rare to see these planets orbiting low-mass host stars and astronomers think this discovery could help them better understand how these giant planets form.

“This is only the fifth Jupiter-sized planet transiting a low-mass star that has been observed and the first with such a long orbital period, which makes this discovery really exciting,” said Caleb Cañas, lead author of the paper and a doctoral student at Penn State and NASA Earth and Space Science Fellow.

Originally detected by NASA’s Transiting Exoplanet Survey Satellite (TESS) spacecraft, astronomers characterized the planet’s mass, radius, and its orbital period using the Habitable-zone Planet Finder (HPF), an astronomical spectrograph built by a Penn State team and installed on the 10 meter Hobby-Eberly Telescope at McDonald Observatory in Texas. A paper describing the research appears in the September 2020 issue of The Astronomical Journaland is publicly accessible on arXiv.

“A transiting Jupiter-sized planet is amenable to further observations to see how well the orbit is aligned with the spin-axis of the host star and to constrain how it could have formed,” said Cañas. “Furthermore, the low mass of the host star and the long orbital period result in a Jupiter with a moderate temperature compared to similar planets detected with NASA’s Kepler space telescope.”

The host star, TOI-1899, is a low-mass — M dwarf — star about 419 light years away from Earth. The planet, TOI-1899 b, is two-thirds the mass of Jupiter, 10% larger in radius than Jupiter, and is 0.16 astronomical units — a measure defined as the distance between the Earth and the sun — from its host star such that a full year on TOI-1899 takes only 29 Earth days. For comparison, the four other transiting Jupiter-size planets around comparable stars complete their orbits in less than 4 days.

The planet was detected by TESS using the transit method, which searches for stars showing periodic dips in their brightness as a telltale sign of an orbiting object crossing in front of the star and blocking a portion of its light. The signal was later confirmed as a planet using precision observations from the HPF spectrograph that measure the planet’s mass by analyzing how it causes its host star to wobble.

The single-transit, indicated by the dip, of the planet TOI-1899 b passing in front of its host star as detected by NASA’s TESS mission. The single 5-hour event can only reveal the size of planet and a detailed characterization of the transiting object required data from the Habitable-zone Planet Finder Spectrograph, a Penn State led near-infrared spectrograph recently installed on the 10m Hobby-Eberly Telescope at McDonald Observatory in Texas.

From a formation and orbital evolution perspective, there is not a clear dividing line between warm Jupiters and the large planets even closer to their host stars, the more commonly discovered hot Jupiters.

"Warm Jupiters like TOI-1899 b orbit surprisingly close to their star,” said Rebekah Dawson, assistant professor of astronomy and astrophysics at Penn State and an author of the paper. “Even though the planet's orbital period is long compared to many other giant planets detected and characterized through the transit method, it still places the giant planet much closer to its star than we'd expect from classical formation theories. Detailed characterization of their physical and orbital properties, system architecture, and host stars — as the HPF team has done for TOI-1899 b — allow us to test theories for how giant planets can form or be displaced so close to their star."

The Habitable-zone Planet Finder was delivered to the 10m Hobby Eberly Telescope at McDonald Observatory in late 2017, and started full science operations in late 2018. HPF is designed to detect and characterize planets in the Habitable-zone — the region around the star where a planet could sustain liquid water on its surface — around nearby M-dwarf stars, but is also capable of making sensitive measurements for planets outside the habitable zone.

“This warm Jupiter is a compelling target for atmospheric characterization with upcoming missions like the James Webb Space Telescope,” said Suvrath Mahadevan, professor of astronomy and astrophysics at Penn State, the principal investigator of the HPF spectrograph, and an author of the paper. “HPF was critical in helping us to confirm this, but detecting a second transit is important to very precisely pin down its period.”

The Hobby-Eberly Telescope (HET) is a joint project of the University of Texas at Austin, Penn State, Ludwig-Maximilians-Universität München, and Georg-August Universität Gottingen. The HET is named in honor of its principal benefactors, William P. Hobby and Robert E. Eberly.

A publicly accessible discussion of this result can also be found on the HPF blog.