The crash site matches the re-entry path of an unpressurized capsule 'trunk' that fell to Earth around July 8. 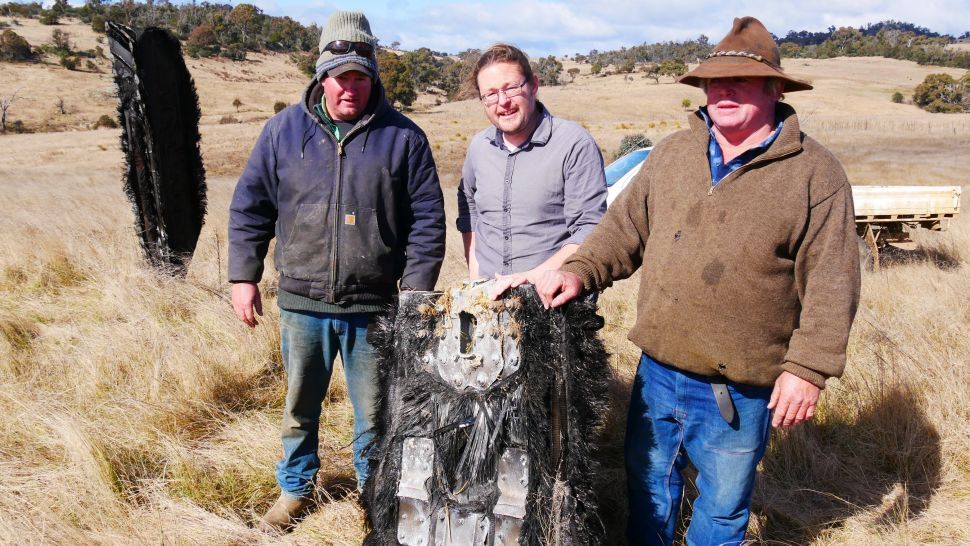 Space junk from an old SpaceX mission may have landed in rural Australia.

A chunk of charred material reportedly left over from the reentry of a SpaceXspacecraft was found in the middle of a sheep paddock near Dalgety; the discovery followed a "bang" heard by witnesses July 9 local time in the southeast of the country

SpaceX has not yet confirmed if the piece was a part of its Crew-1 Dragon spacecraft that splashed down successfully on May 2, 2021. That said, long-time space debris tracker Jonathan McDowell said on Twitter(opens in new tab) Friday (July 29) that Dalgety was in fact underneath the projected re-entry pathway of an unpressurized "trunk" piece of Dragon, jettisoned before re-entry.

Space junk from an old SpaceX mission may have landed in rural Australia.

A chunk of charred material reportedly left over from the reentry of a SpaceXspacecraft was found in the middle of a sheep paddock near Dalgety; the discovery followed a "bang" heard by witnesses July 9 local time in the southeast of the country.

SpaceX has not yet confirmed if the piece was a part of its Crew-1 Dragon spacecraft that splashed down successfully on May 2, 2021. That said, long-time space debris tracker Jonathan McDowell said on Twitter(opens in new tab) Friday (July 29) that Dalgety was in fact underneath the projected re-entry pathway of an unpressurized "trunk" piece of Dragon, jettisoned before re-entry.

McDowell added that the photos suggest that the debris came from one of the trunk fins. These fins sit on the circumference of the rocket to assist with aerodynamics during the launch phase of the mission.

Sheep farmer Mick Miners found the nearly 9-foot (3-meter) high object in a distant part of his paddock Monday (July 25) and didn't know what it was, according to ABC News(opens in new tab). After a call to neighboring farmer Jock Wallace, he discovered Wallace spotted more debris on his property the previous week, on July 21.

Wallace called the local civil aviation authority for advice, who advised him to reach out to NASA for more information. "I'm a farmer from Dalgety. What am I going to say to NASA?" Wallace told ABC.

The debris is most likely the unpressurized "trunk" of the spacecraft, astrophysicist Brad Tucker told Space.com. "Having gone out there and looked at the bits myself, there is not a doubt in my mind it is space junk," he said in an e-mail.

The trunk is designed to send unpressurized cargo into space, and also to support the Crew Dragon during its launch, according to SpaceX(opens in new tab). Half of the trunk includes solar panels that power Dragon when the vessel is in flight or docked to the station. The trunk detaches from the spacecraft shortly before re-entry.

The sonic boom, Tucker said, was widely heard at 7:05 a.m. local time on July 9 and the pieces found near Dalgety were "very close to the tracked path of the SpaceX-1 Crew trunk."

The farms where the pieces were found span hundreds of acres, which is why it took several weeks for the discoveries, Tucker added. "From a distance as well, it just looks like an old burnt tree stump. It wasn't until you got closer you realize there is something off about it. Both farmers thought it had been there a few weeks based on the last time they would have gone nearby."

Tucker found at least one part number on one of the pieces and has asked SpaceX to confirm if this matches the trunk. "Having looked at it myself," he added, "the way it is manufactured and the material is clearly of an advanced manufacturing. This wasn’t done in someone’s shed. You can see clear scorching marks from re-entry."

If confirmed as a piece of Dragon, Tucker told ABC this would be the largest documented piece of space debris in Australia since Skylab broke up over the continent during an uncontrolled re-entry over western Australia in 1979.

The NASA space station had been uncrewed for several years before increasing solar activity unexpectedly "ballooned" Earth's atmosphere, increasing the drag on Skylab. The agency did its best to steer the station to unpopulated areas. Known debris from the incident includes an oxygen tank, a hatch, and even a storage freezer.

The potential SpaceX debris is at a relatively small scale compared with the nearly 100-foot (30-meter) Chinese Long March 5B core stage expected to come back to Earth this weekend. In any case, the odds of any space debris posing an issue to Earthlings is infinitesimally small.

The United States and most international space agencies have practices governing how to deal with space debris, with the Americans following government-created Orbital Debris Mitigation Standard Practices(opens in new tab).

If the Dalgety debris is confirmed, this wouldn't be the first time a large chunk of SpaceX hardware fell to Earth. Debris from a SpaceX launch in April 2021 showed up on a farm in central Washington, which at the time was linked to the second stage of a Falcon 9 rocket. The 2021 debris was confirmed as SpaceX-generated by the Grant County Sheriff's Office; SpaceX didn't respond to requests for comment.

Debris from SpaceX craft crashes on to Australian property

A 3-metre piece of space junk from Elon Musk's spacecraft has crashed into a farmer's property in NSW.

The object – which was part of the SpaceX Crew-1 craft – was found in a sheep paddock by a farmer living on a large property in the Snowy Mountains.

Farmer Mick Miners said he discovered the space junk, which resembled a tree from a distance, after his family heard a loud bang.

The bang was also reportedly heard by residents living in southern NSW, with some alleging they saw an explosion.

Neighbouring farmer Jock Wallace also reported a similar foreign object that had torpedoed into his land.

Luckily for both farmers, the space waste – which came from one of the craft's fins – was located a fair way from their homes. 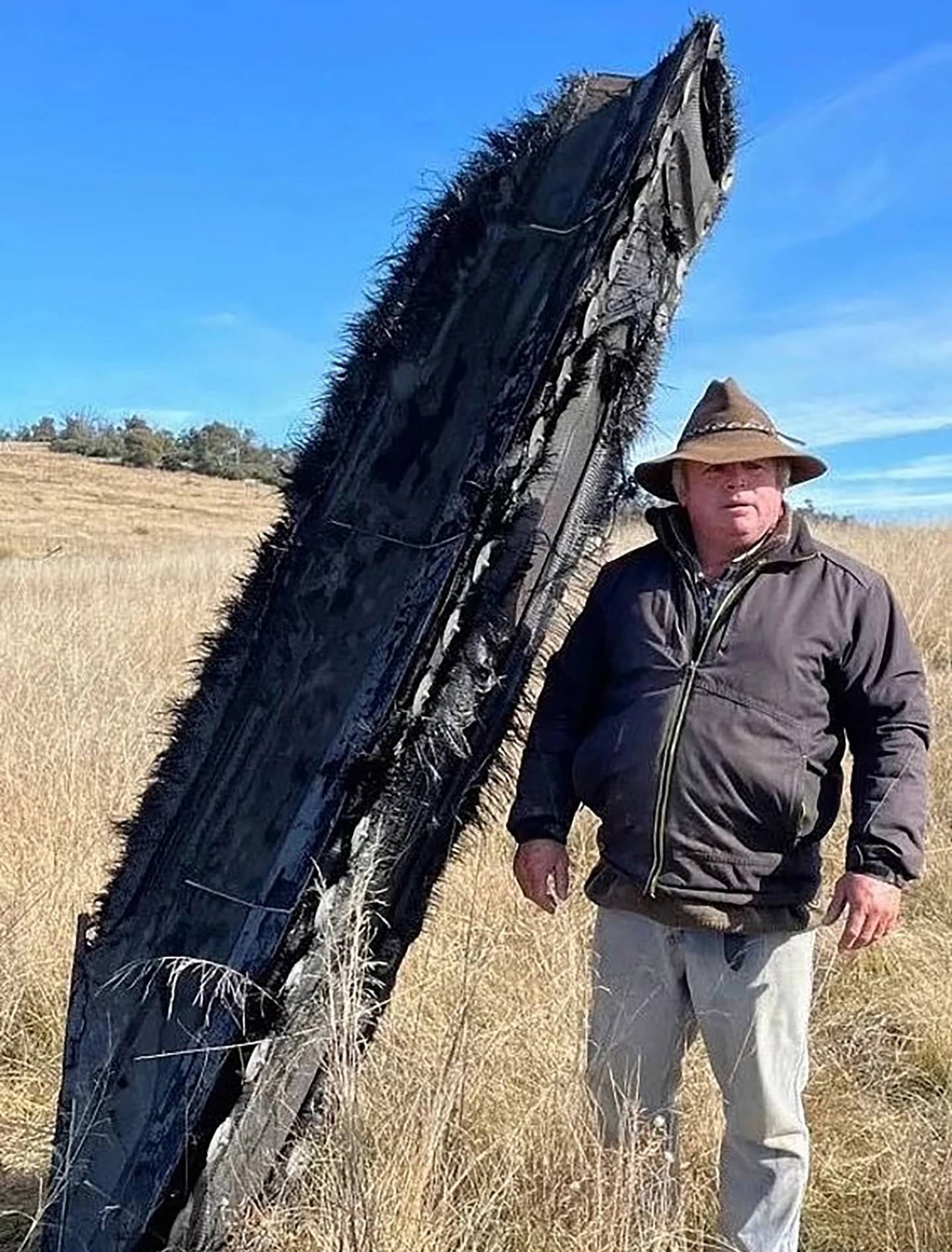 "This is most definitely space junk which was part of the SpaceX Crew-1 trunk," he told Ben Fordham on radio on Monday.

"SpaceX has this capsule that takes humans into space, but there is a bottom part … so when the astronauts come back, they leave the bottom part in space before the capsule lands."

The spacecraft, which costs $62m per launch, has started to deorbit after almost two years in space.

Tucker said the craft was originally planned to break apart and land in the ocean.

"We saw most pieces land in the ocean, but clearly some hadn't because this 3-metre piece was speared into the ground from space," Tucker said.

"In photographs of the debris, you can clearly see charring, which you would expect from re-entry [into the atmosphere]. It is very rare to see because they don't usually land on land but in the ocean. People often think they find small pieces of space junk, but they would burn up on re-entry, so it's more likely to be large pieces like this."

The spacecraft, which is a stainless steel rocket, was more than 50m tall.

SpaceX is an American aerospace company founded in 2002 by Musk that helped usher in the era of commercial spaceflight.