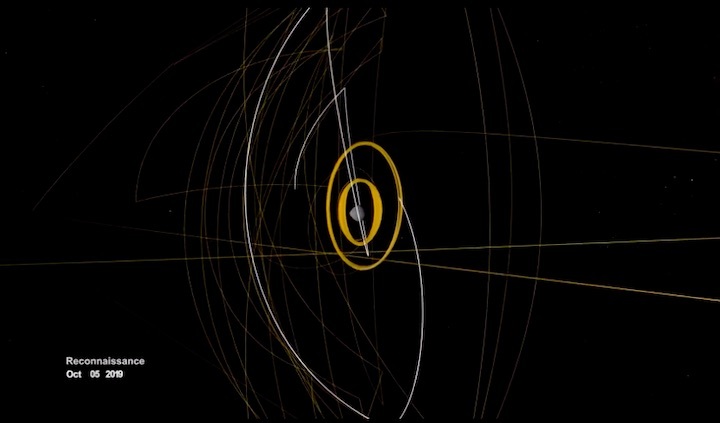 Alongside cultural heavyweights such as Disney’s “Encanto” and Warner Brothers’ “The Batman,” a short film created at Goddard shares the screen next week at a festival honoring standout works of computer animated storytelling.

“A Web Around Asteroid Bennu” highlights the tricky navigation it took for NASA’s OSIRIS-REx mission to collect a sample from asteroid Bennu in 2020. Produced at NASA’s Goddard Space Flight Center in Greenbelt, Maryland, the video will show in Vancouver, British Columbia, on Aug. 8 in the SIGGRAPH computer graphics conference’s Electronic Theater, a qualifying venue for Academy Award consideration.

Bennu is one of Earth’s closest planetary neighbors – an asteroid roughly the height of a skyscraper, and since late 2018, the place that NASA’s OSIRIS-REx mission has called home. When OSIRIS-REx arrived on Dec. 3, 2018, it began wrapping Bennu in a complex web of observations. This narrated video presents the mission’s complete trajectory during its time at Bennu.
Credits: NASA's Goddard Space Flight Center
Download this video in HD formats from NASA Goddard’s Scientific Visualization Studio

OSIRIS-REx completed a series of complicated maneuvers around Bennu over the course of two-and-a-half years before collecting its sample with a touch-and-go, or TAG, maneuver and exiting orbit. The various segments of this web-like flight path were highlighted in full by data visualizer Kel Elkins, of NASA’s Scientific Visualization Studio at Goddard.

“I started working with the trajectory data in 2015,” Elkins said. “And when you first see an image of all the different maneuvers it looks like a rat’s nest. But it was really exciting to see these complicated maneuvers in 3D space.”

“From a trajectory and navigation perspective, the team really did things that have never been done before in planetary exploration,” said Mike Moreau, deputy project manager for OSIRIS-REx at NASA Goddard. “We flew the spacecraft closer to this object than any spacecraft has ever been flown before; we did maneuvers that were centimeters per second, or millimeters per second, in order to get the spacecraft exactly where it needed to be and to change its orbit.”

The video runs about four minutes in total, showing the flight path around Bennu from beginning to end in a single, continuous shot.

“We knew we wanted to make one big product for departure,” said Dan Gallagher, multimedia producer for planetary science at NASA Goddard. “And it seemed like a natural fit to show the entire web from the beginning to the end, and release it at the point when we actually left and headed back to Earth.”

The concept is simple, but the path from idea to a final product included some precise science to pull it off effectively. What a viewer sees in this video is not merely an imagined drawing, but actual, illustrated data: “What makes the Scientific Visualization Studio a bit different is that the elements in our visualizations are driven directly by mission data,” Elkins said. “I enjoy working on projects that are based on real science data and being able to communicate that to people.”

“A Web Around Asteroid Bennu” is the latest in a string of Goddard productions to make it to the SIGGRAPH Electronic Theater. Elkins and Gallagher’s “Tour of Asteroid Bennu” was shown there last year.

With two consecutive appearances from Goddard planetary science and the Scientific Visualization Studio, what comes next for Elkins and Gallagher?

“When I first talked to Dan and said I was excited how we got selected for the second piece, Dan already started planning,” Elkins said. “He was like, ‘Well, we’ve got to plan on the third one, we’ve got to get the hat trick.’”

“Kel said he was surprised that we were in two years in a row,” Gallagher said. “But I'm not surprised. Kel is amazing. The SVS is amazing. I think they deserve to be up there with the best of Hollywood.”

This month the team plans to release their next piece for OSIRIS-REx: a 360-degree version of “A Web Around Asteroid Bennu” that wraps the video around the viewer, for an interactive experience on VR headsets, mobile devices, and online.

“As amazing as it is to see the trajectory in front of you in the original format, there’s something about putting the viewer in the middle of it and letting them look around,” Elkins said. “You're in space and OSIRIS-REx is flying around you. We're really excited to be able to publish this additional 360-degree view.”

Goddard provides overall mission management, systems engineering, and the safety and mission assurance for OSIRIS-REx. Dante Lauretta of the University of Arizona, Tucson, is the principal investigator. The university leads the science team and the mission's science observation planning and data processing. Lockheed Martin Space in Littleton, Colorado, built the spacecraft and provides flight operations. Goddard and KinetX Aerospace are responsible for navigating the OSIRIS-REx spacecraft. OSIRIS-REx is the third mission in NASA's New Frontiers Program, managed by NASA's Marshall Space Flight Center in Huntsville, Alabama, for the agency's Science Mission Directorate Washington.