A new study that monitored the subtle movements of huge ripples of sand on the Martian surface suggests that Mars may actually be windier than researchers thought. 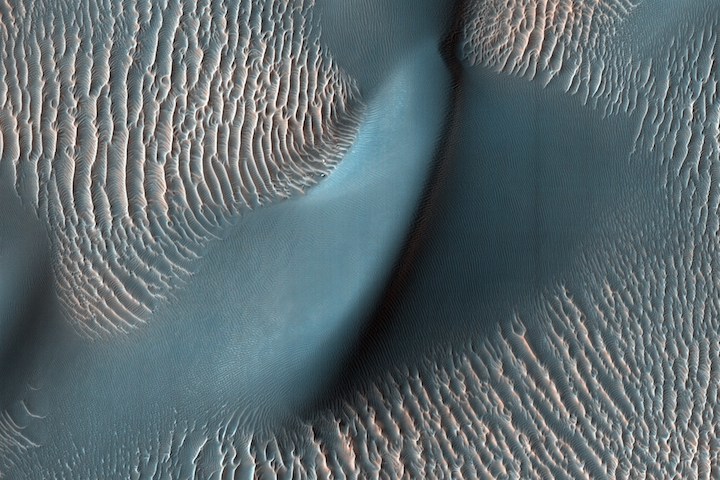 The sandy landscape of Mars is home to plenty of severe weather, including the odd dust storm so large that it can be observed by telescopes on Earth.

But its day-to-day weather remains something of a mystery.

Now, a new study that monitored the subtle movements of huge ripples of sand on the Martian surface suggests that Mars may actually be windier than researchers thought.

It’s not uncommon to find wavelike features, known as “megaripples,” in some deserts of Mars, but scientists previously thought that these were stagnant landforms — relics of the planet’s more geologically dynamic past. The thinking went that Mars’ thin atmosphere wasn’t likely to whip up winds strong enough to move megaripples.

That may no longer be the case, according to Simone Silvestro, a research scientist at the National Institute for Astrophysics in Naples, Italy, and lead author of the study published in June in the Journal of Geophysical Research: Planets.

“On Mars, these are the last things you would expect to move, because you need really strong wind to displace even regular sand,” Silvestro said, adding that “the atmosphere of Mars is always surprising — it can do what you would not expect for such a faint atmosphere.“

The scientists used data collected by NASA's Mars Reconnaissance Orbiter, which has been circling the planet since 2006, to study two sites close to the Martian equator: McLaughlin Crater and a region known as Nili Fossae. They compared images of these locations over 7.6 years at McLaughlin Crater and 9.4 years at Nili Fossae and found that megaripples at both moved an average of 3 feet over those time periods.

The findings were unexpected, Silvestro said, because megaripples are made up of coarse grains of sand, particularly at the crests of the rippled features. Fine particles of dust can blow around during Martian dust storms, but it was not previously known if the wind on Mars was powerful enough to sculpt megaripples.

“Basically we are seeing that Mars is still geologically reactive from this point of view,” Silvestro said. “In terms of the geological history of the planet, we can’t discriminate what is past Mars and what is present Mars, and that’s important for exploration of the Red Planet.”

The scientists are planning to expand their focus to include other sites on Mars, including one near the planet’s northern polar region. Silvestro said the research could inform future human exploration of the planet, as scientists will need to understand how the Martian climate may affect astronaut crews.

NASA launched its newest Mars rover into orbit on July 30. The six-wheeled robotic explorer, named Perseverance, is expected to reach Mars in February, and Silvestro said the rover could get an up-close view of megaripples during its mission.

“We haven’t checked if they are active or not, but there are megaripples about 200 kilometers [about 124 miles] from the Perseverance landing site,” he said.

Megaripples can also be found in many deserts on Earth, where scientists are also trying to tease out the complex physics that create these intricate, wind-swept patterns. In some cases, the circumstances on Mars are driving scientific discoveries closer to home.

“Mars is like an extraterrestrial laboratory, because we are seeing the same features but with different conditions,” Silvestro said. “By studying these features on Mars, we can also learn new things on Earth.”