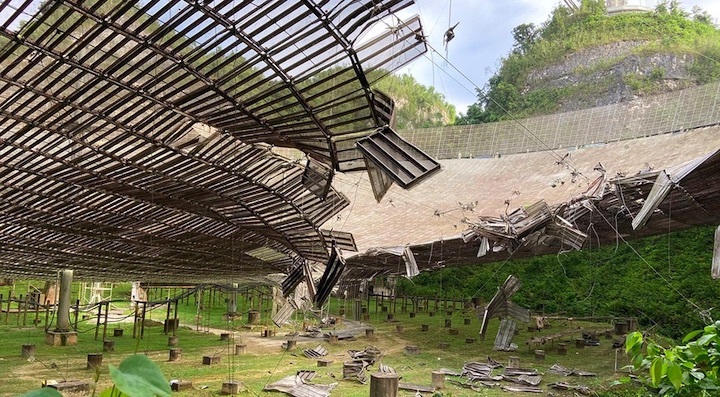 WASHINGTON — One of the largest radio telescopes in the world, used by NASA as part of its planetary defense program, is out of service indefinitely after suffering damage from a broken cable.

The University of Central Florida, part of the consortium that operates the Arecibo Observatory in Puerto Rico, said a cable used to help support a platform above the main reflector dish snapped in the early morning hours Aug. 10. The cable created a gash about 30 meters long in the dish, and damaged panels in a receiver called the Gregorian Dome mounted on that platform.

Observatory officials said in an Aug. 11 statement that they did not know what caused the cable to break. “We have a team of experts assessing the situation,” Francisco Cordova, director of the observatory, said, with a goal of “restoring the facility to full operations as soon as possible.” He did not estimate how long the repairs will take or how much they will cost.

Arecibo was built in the early 1960s as the largest single-dish radio telescope in the world, with a diameter of 305 meters. It remained the largest in the world for decades, until China completed the Five Hundred Meter Aperture Spherical Telescope, or FAST, in 2016.

The observatory has, in recent years, been battered by both natural catastrophes and financial uncertainty. Earthquakes and hurricanes have damaged the telescope, including the powerful Hurricane Maria in 2017. Some repairs from that hurricane are still in progress.

Efforts in recent years by the National Science Foundation (NSF), which funds the majority of Arecibo’s operations, to divest some of its astronomical facilities also raised questions about Arecibo’s long-term future. NSF selected a group led by the University of Central Florida, with Universidad Ana G. Méndez and Yang Enterprises Inc., to run the telescope in 2018.

Part of Arecibo’s funding comes from NASA, which uses a planetary radar system at the observatory to track and characterize near Earth objects as part of the agency’s planetary defense program. While Arecibo isn’t used to discover asteroids, that radar system can refine the orbits of asteroids and measure their shapes.

One example is asteroid 2020 NK1, discovered by a telescope in Hawaii in early July and whose initial orbit showed it posed an impact risk to the Earth late this century. Observations by Arecibo’s planetary radar in late July ruled out any impact threat, while also measuring the size and shape of the asteroid.