An international team of researchers have used state-of-the-art computer simulations to solve the puzzle of how the very smallest galaxies in the Universe form stars, and why they form as slowly as they do. 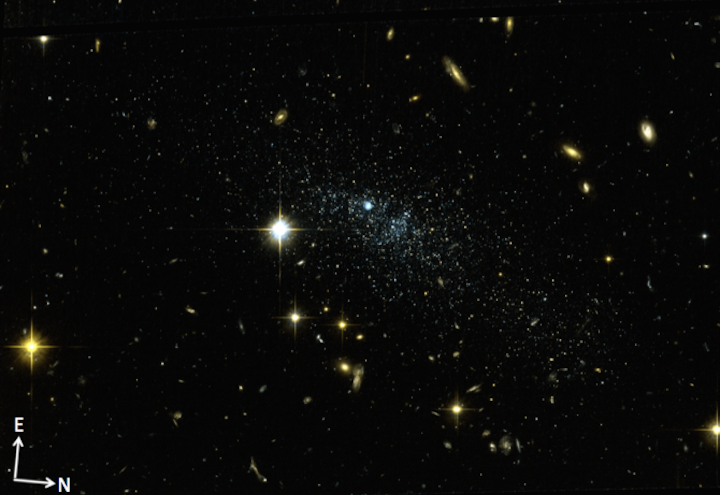 There are around 2,000 billion galaxies in the Universe, the largest of which contain many hundreds of billions of stars, but the very smallest – dwarf galaxies – can have fewer than a hundred thousand. Some of these lie out in the cosmic wilderness, far from the influence of any other galaxy, slowly forming stars at a remarkably low rate.

In a new study, published in the research journal Monthly Notices of the Royal Astronomical Society, researchers from the University of Surrey, Lund University, UCL London and Centre de Recherche Astrophysique de Lyon, have revealed that the smallest dwarf galaxies, such as Leo P (pictured), are capable of lying dormant for several billion years before starting to form stars again at a remarkably low rate.

Dr Martin Rey, lead author from Lund University, said: “In our study, we model dwarf galaxies at a much higher resolution than in previous works, allowing us to capture their individual sites of star formation. As in previous studies, we find that the smallest dwarfs have their star formation shut down by exploding stars and stellar radiation. What’s new, however, is that we find that some of these dwarfs then slowly reaccumulate gas, reigniting their star formation at a remarkably low rate.”

The simulations form a part of the “EDGE” project, led by Professor Justin Read at the University of Surrey, that ran on the UK DiRAC national supercomputer. The computer simulations used by the researchers in the study are amongst the most expensive that can be carried out in physics today. Each simulation takes several months and requires the equivalent of 40 laptop computers operating around the clock.

Professor Justin Read, Principle Investigator of EDGE and Head of Physics at the University of Surrey, said: “One of the key goals of the EDGE project was to understand how puzzling galaxies like Leo P form, so it is incredibly satisfying to see such galaxies emerge naturally from the calculation. It suggests that the latest models for galaxy formation and cosmology really are on the right track.”

Dr Martin Rey concludes: “By deepening our understanding of this subject, we gain new insights into the modelling of astrophysical processes such as star explosions, as well as the heating and cooling of cosmic gas. Further work is now underway to predict how many such star-forming dwarfs exist in our Universe, and how many could, therefore, be discovered by up-coming astronomical telescopes and surveys.”