Dozens of times over the last decade NASA scientists have launched laser beams at a reflector the size of a paperback novel about 240,000 miles (385,000 kilometers) away from Earth. They announced today, in collaboration with their French colleagues, that they received signal back for the first time, an encouraging result that could enhance laser experiments used to study the physics of the universe.

The reflector NASA scientists aimed for is mounted on the Lunar Reconnaissance Orbiter (LRO), a spacecraft that has been studying the Moon from its orbit since 2009. One reason engineers placed the reflector on LRO was so it could serve as a pristine target to help test the reflecting power of panels left on the Moon’s surface about 50 years ago. These older reflectors are returning a weak signal, which is making it harder to use them for science.

Scientists have been using reflectors on the Moon since the Apollo era to learn more about our nearest neighbor. It’s a fairly straightforward experiment: Aim a beam of light at the reflector and clock the amount of time it takes for the light to come back. Decades of making this one measurement has led to major discoveries.

One of the biggest revelations is that the Earth and Moon are slowly drifting apart at the rate that fingernails grow, or 1.5 inches (3.8 centimeters) per year. This widening gap is the result of gravitational interactions between the two bodies.

“Now that we’ve been collecting data for 50 years, we can see trends that we wouldn’t have been able to see otherwise,” said Erwan Mazarico, a planetary scientist from NASA’s Goddard Space Flight Center in Greenbelt, Maryland who coordinated the LRO experiment that was described on August 7 in the journal Earth, Planets and Space.

But if scientists are to continue using the surface panels far into the future, they need figure out why some of them are returning only a 10th of the expected signal. 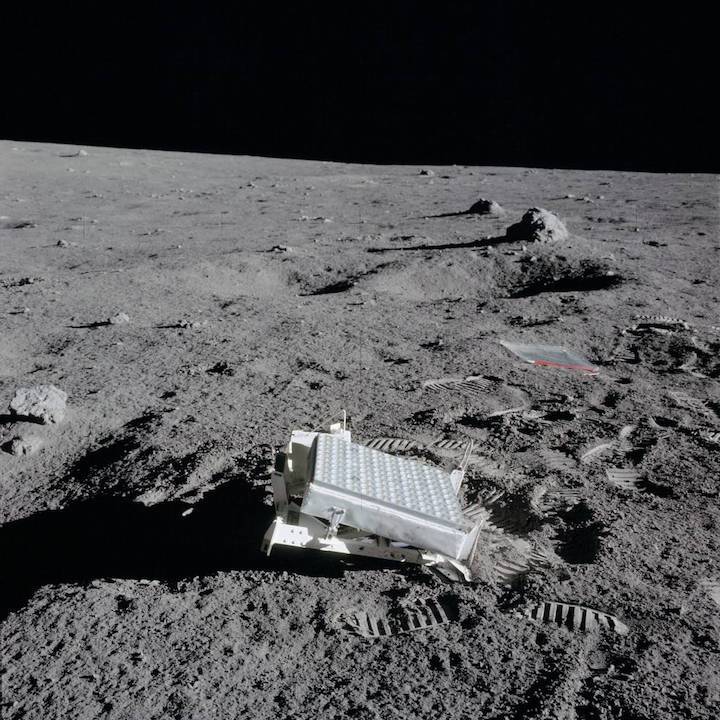 A close-up photograph of the laser reflecting panel deployed by Apollo 14 astronauts on the Moon in 1971.
Credits: NASA

There are five reflecting panels on the Moon. Two were delivered by Apollo 11 and 14 crews in 1969 and 1971, respectively. They are each made of 100 mirrors that scientists call “corner cubes,” as they are corners of a glass cube; the benefit of these mirrors is that they can reflect light back to any direction it comes from. Another panel with 300 corner cubes was dropped off by Apollo 15 astronauts in 1973. Soviet robotic rovers called Lunokhod 1 and 2, which landed in 1970 and 1973, carry two additional reflectors, with 14 mirrors each. Collectively, these reflectors comprise the last working science experiment from the Apollo era.

Some experts suspect that dust may have settled on these reflectors over time, possibly after getting kicked up by micrometeorite impacts to the Moon’s surface. As a result, the dust could be blocking light from reaching the mirrors and also insulating the mirrors and causing them to overheat and become less efficient. Scientists hoped to use LRO’s reflector to determine if that’s true. They figured that if they found a discrepancy in the light returned from LRO’s reflector versus the surface ones, they could use computer models to test whether dust, or something else, is responsible. Whatever the cause, scientists could then account for it in their data analysis.

Despite their first successful laser-ranging experiments, Mazarico and his team haven’t settled the dust question just yet. The researchers are refining their technique so they can collect more measurements.

In the meantime, scientists continue to rely on the surface reflectors to learn new things, despite the weaker signal.

By measuring how long it takes laser light to bounce back — about 2.5 seconds on average  — researchers can calculate the distance between Earth laser stations and Moon reflectors down to less than an inch, or a few millimeters. This is about the thickness of an orange peel.

Besides the Earth-Moon drift, such measurements over a long period of time and across several reflectors have revealed that the Moon has a fluid core. Scientists can tell by monitoring the slightest wobbles as the Moon rotates. But they want to know whether there’s a solid core inside of that fluid, said Vishnu Viswanathan, a NASA Goddard scientist who studies the internal structure of the Moon.

“Knowing about the Moon’s interior has bigger implications that involve the evolution of the Moon and explaining the timing of its magnetic field and how it died out,” Viswanathan said. 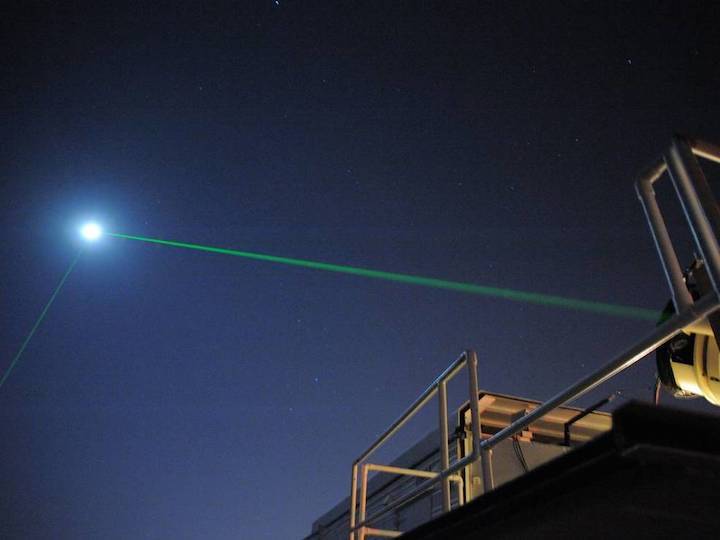 This photograph shows the laser-ranging facility at the Goddard Geophysical and Astronomical Observatory in Greenbelt, Md. The facility helps NASA keep track of orbiting satellites. Both beams shown, coming from two different lasers, are pointed at NASA's Lunar Reconnaissance Orbiter, which is orbiting the Moon. Here, scientists are using the visible, green wavelength of light. The laser facility at the Université Côte d’Azur in Grasse, France, developed a new technique that uses infrared light, which is invisible to the human eye, to beam laser light to the Moon.
Credits: NASA

Magnetic measurements of Moon samples returned by Apollo astronauts revealed something no one had expected given how small the Moon is: our satellite had a magnetic field billions of years ago. Scientists have been trying to figure out what inside the Moon could have generated it.

Laser experiments could help reveal if there’s solid material in the Moon’s core that would’ve helped power the now-extinct magnetic field. But to learn more, scientists first need to know the distance between Earth stations and the Moon reflectors to a higher degree of accuracy than the current few millimeters. “The precision of this one measurement has the potential to refine our understanding of gravity and the evolution of the solar system,” said Xiaoli Sun, a Goddard planetary scientist who helped design LRO’s reflector.

Getting more photons to the Moon and back and better accounting for ones that are lost because of dust, for instance, are a couple of ways to help improve precision. But it’s a herculean task.

Consider the surface panels. Scientists must first pinpoint the precise location of each one, which is constantly changing with the Moon’s orbit. Then, the laser photons must travel twice through Earth’s thick atmosphere, which tends to scatter them. 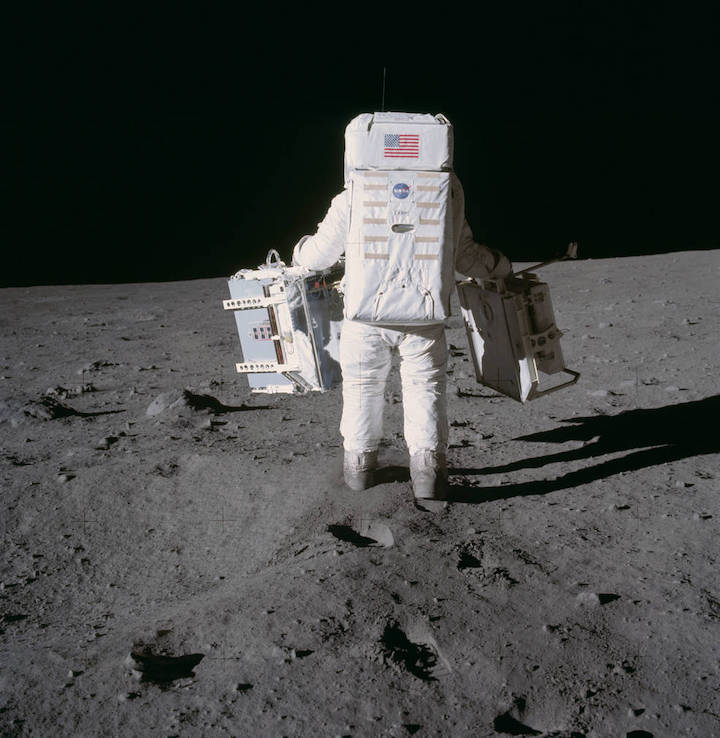 Astronaut Edwin E. Aldrin Jr., lunar module pilot, deploys two components of the Early Apollo Scientific Experiments Package on the surface of the Moon during the Apollo 11 extravehicular activity in 1969. A seismic experiment is in his left hand, and in his right is a laser-reflecting panel. Astronaut Neil A. Armstrong, mission commander, took this photograph.
Credits: NASA's Johnson Space Flight Center

Thus, what begins as a light beam that’s about 10 feet, or a few meters, wide on the ground can spread out to more than 1 mile, or 2 kilometers, by the time it reaches the Moon’s surface, and much wider when it bounces back. That translates to a one-in-25-million chance that a photon launched from Earth will reach the Apollo 11 reflector. For the few photons that manage to reach the Moon, there’s an even lower chance, one in 250 million, that they will make it back, according to some estimates.

If those odds seem daunting, reaching LRO’s reflector is even more challenging. For one, it is a 10th the size of the smaller Apollo 11 and 14 panels, with only 12 corner cube mirrors. It’s also attached to a fast-moving target the size of a compact car that’s 70 times farther away from us than Miami is from Seattle. Weather at the laser station impacts the light signal, too, as does the alignment of the Sun, Moon and Earth.

That’s why despite several attempts over the last decade NASA Goddard scientists had been unable to reach LRO’s reflector until their collaboration with French researchers.

Their success thus far is based on using advanced technology developed by the Géoazur team at the Université Côte d’Azur for a laser station in Grasse, France, that can pulse an infrared wavelength of light at LRO. One benefit of using infrared light is that it penetrates Earth’s atmosphere better than the visible green wavelength of light that scientists have traditionally used.

But even with infrared light, the Grasse telescope received only about 200 photons back out of tens of thousands of pulses cast at LRO during a few dates in 2018 and 2019, Mazarico and his team report in their paper.

It may not seem like much, but even a few photons over time could help answer the surface reflector dust question. A successful laser beam return also shows the promise of using infrared laser for precise monitoring of Earth’s and Moon’s orbits, and of using many small reflectors — perhaps installed on NASA’s commercial lunar landers — to do so. This is why some scientists would like to see new and improved reflectors sent to more regions of the Moon, which NASA is planning to do. Others are calling for getting more facilities around the globe equipped with infrared lasers that can pulse to the Moon from different angles, which can further improve the precision of distance measurements. New approaches to laser ranging such as these can ensure that the legacy of these fundamental studies will continue, scientists say.