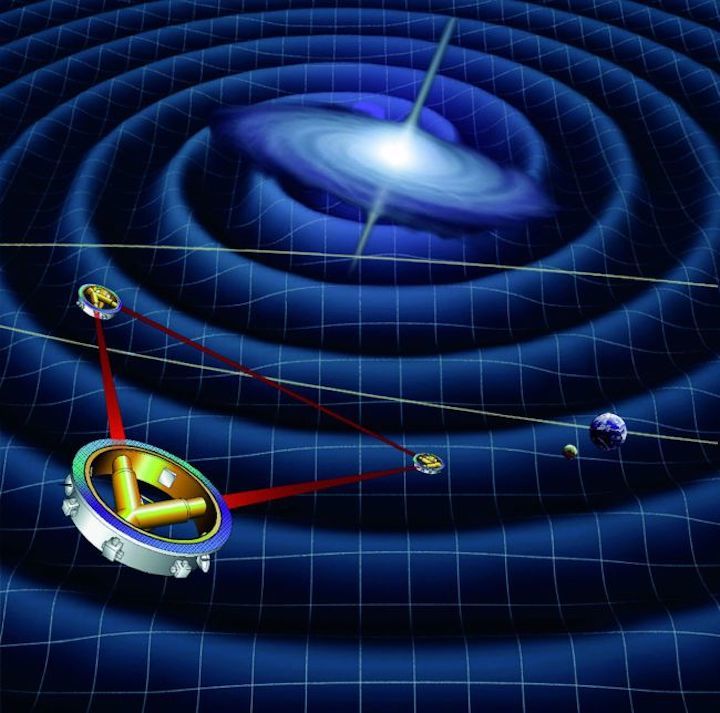 Scientists may one day detect alien planets outside the Milky Way using the ripples in space and time known as gravitational waves, a new study finds.

In the past three decades, scientists have confirmed the existence of nearly 4,200 worlds outside of Earth's solar system. Astronomers detected these exoplanets using methods that analyzed the light either from the worlds themselves or their stars. As such, these strategies are limited by and large to detecting planets within our galaxy, as the chances of spotting light signals from extragalactic worlds are slim, given the vast distances involved as well as intervening clouds of dust and other hindrances.

One possible sighting of an extragalactic planet, dubbed HIP 13044b, later turned out to be a dud, and others have yet to be confirmed. In 2018, astronomers did spot evidence of rogue planets outside the Milky Way, but these were only indirect estimates.

Now researchers suggest the first extragalactic planets may get detected not via light signals, but gravitational-wave signals. Albert Einstein first predicted the existence of gravitational waves in 1916. According to his theory of general relativity, gravity results from the way in which mass warps space and time. When two or more objects move within a gravitational field, they produce gravitational waves that travel at the speed of light, stretching and squeezing space-time along the way.

Importantly, the kinds of obstacles that block very distant light from reaching Earth would generally not hinder gravitational waves. But gravitational waves are extraordinarily difficult to detect because they are extremely weak; even Einstein was uncertain whether they really existed or would be confirmed.

After decades of work, scientists discovered the first direct evidence of gravitational waves in 2015 with the Laser Interferometer Gravitational-Wave Observatory (LIGO). LIGO uses a pair of detectors — one in Hanford, Washington, and the other in Livingston, Louisiana — to sense the distortions that gravitational waves cause as they ripple through matter.

Each detector is shaped like a gigantic L, with legs about 2.5 miles (4 kilometers) long. The legs of each detector are normally the same length, so laser beams take the same amount of time to travel down each. However, if gravitational waves pass through Earth, one detector leg stretches and the other contracts, switching for the duration of the signal, by about one-ten-thousandth the diameter of a proton. Atomic clocks can detect the split-second differences in time it takes for laser beams to zip down a detector leg under these circumstances.

The current and planned ground-based gravitational-wave observatories are all sensitive to wavelengths of about 60 miles (100 km); neutron stars and black holes up to a few dozen times the mass of the sun create this flavor of signal. However, scientists have long dreamed of space-based gravitational-wave observatories, with detectors separated by vast distances that could sense even longer wavelengths. These signal types trace back to a menagerie of sources, including supermassive black holes.

One space-based gravitational-wave observatory under development is the European Space Agency's Laser Interferometer Space Antenna (LISA) mission, scheduled to launch in 2034. LISA will consist of a trio of satellites in orbit around the sun behind Earth. Inside each satellite will be a cube that will fall freely through space, tracing a path only perturbed by gravitational waves. This constellation of satellites will carefully monitor the position of each cube to look for signs of space-time ripples.

Each of LISA's satellites will be millions of miles away from each other. In principle, LISA will be able to detect gravitational waves with wavelengths of about 18 million miles (30 million km). Such signals, scientists believe, stem from the mergers of black holes 10,000 to 10 million times the mass of the sun.

Scientists have also calculated LISA will be able to detect gravitational waves from tens of thousands of pairs of white dwarfs. White dwarfs are the cool, dim, Earth-size cores of dead stars that are left behind after average-size stars have exhausted their fuel and shed their outer layers. Our sun will one day become a white dwarf, as will more than 90% of the other stars in the Milky Way.

In 2019, the same scientists behind the new research found that LISA and other space-based gravitational wave observatories could spot giant exoplanets circling double white dwarfs inside our galaxy. Now they determine that LISA could also detect similar planetary systems outside the Milky Way, especially within the more than 50 satellite galaxies that orbit our galaxy.

The researchers noted that when two white dwarfs are close enough to merge within millennia, the pair should generate a continuous stream of gravitational waves that nearly all possess the same frequency. While LISA is active, which could be for as long as 10 years, the observatory could monitor these streams of gravitation waves for any tiny deviations, such as those caused by the gravitational fields of giant planets orbiting these pairs.

Previously, the scientists found LISA could detect up to a few hundred exoplanets with masses comparable to or heavier than that of Jupiter, provided these planets were separated from their double white dwarfs by distances of less than 10 astronomical units (AU). (One AU is the average distance between Earth and the sun, which is about 93 million miles, or 150 million km.)

In the new research, the scientists estimated that LISA could detect up to a few hundred double white dwarfs in the Large Magellanic Cloud, one of the Milky Way's closest satellite galaxies. For a theoretical binary with a total mass equal to half the sun's and whose white dwarfs orbit one another at a distance about one-thousandth that between Mercury and the sun, for example, they calculated that LISA might start detecting an exoplanet 13 times Jupiter's mass after four years of observations, and that LISA would certainly detect such a world after 10 years of monitoring.

"Thanks to gravitational waves, we may finally be able to observe such objects far away from the solar neighborhood," study co-author Camilla Danielski, an astrophysicist at University College London, told Space.com.

Future space-based gravitational-wave observatories with 10 times or more sensitivity than LISA, such as the AMIGO space mission envisioned by Chinese scientists, could detect an exoplanet four times Jupiter's mass orbiting such a double white dwarf with 10 years of observations.

"Ours are only the first studies into this new observational method," study co-author Nicola Tamanini, an astrophysicist at the Max Planck Institute for Gravitational Physics in Germany, told Space.com. "Future research will deliver a more detailed picture."

Much remains uncertain about planets around such double white dwarfs, such as their formation and evolution. Future research might explore planets that formed not only before the stars became white dwarfs, but after, Danielski said. Gravitational-wave observations might help shed light on these questions by revealing what kinds of masses and orbits these worlds typically possess.

They detailed their findings online July 14 in the International Journal of Modern Physics D.