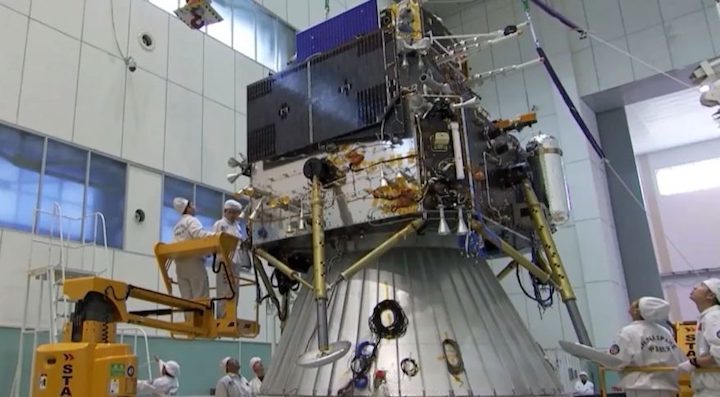 HELSINKI — China has initiated preparations to launch Chang’e-5, a mission seeking to collect and return the first lunar samples since the 1970s.

Chang’e-5 aims to collect and return around two kilograms of lunar samples and was earlier slated for launch before the end of 2020. Ship tracking and satellite data now indicate that China is readying for launch in late November.

Specialized cargo ships Yuanwang-21 and -22 are understood to have collected Long March 5 components from the northern port city of Tianjin, the point of manufacture, and are currentlytransporting them to Qinglan, Hainan island. The components will then be delivered by road to Wenchang Satellite Launch Center.

Yuanwang-21 and 22 in May transported the Long March 5 rocket used to launch the Tianwen-1 Mars mission in late July from Tianjin to Hainan.

China’s four previous Long March 5 launches took around 60 days to go from delivery to Wenchang to liftoff. The Yuanwang ships are due to reach Qinlan September 19, indicating launch is now likely in the last ten days of November.

Chang’e-5 will target a site close to Mons Rümker, a volcanic formation situated in the Oceanus Procellarum region of western edge of the near side of the moon.

A late November launch would allow Chang’e-5 to enter lunar orbit close to sunrise over Mons Rümker, due to occur November 27, in preparation for landing.

Unlike China’s ongoing, multi-lunar-day Chang’e-4 spacecraft, the Chang’e-5 landing and sampling is expected to take place within a single, roughly 14-Earth-day lunar daytime.

The complex mission involves four spacecraft, with a service module providing propulsion. Once on the moon, the mission lander will collect samples and place them in an ascent vehicle. This will liftoff and dock with the orbiting  service module above the moon, using a robotic lunar orbit rendezvous rather than a direct return favored by Soviet Luna sample returns.

The samples will be transferred to a return module before leaving lunar orbit for Earth. The return module will detach from the service module on approach to Earth and then perform a ‘skip reentry’, bouncing off the upper atmosphere once to help deal with high velocity return from the moon. The 2014 Chang’e 5-T1 mission—a test for Chang’e-5—used a one-skip reentry.

The return capsule will deliver the samples to Siziwang Banner in Inner Mongolia. The same site is used for the country’s Shenzhou crewed mission landings.

The complexity of the mission profile is considered by observers to be related to future crewed lunar landing ambitions.

The mission is the third phase of the Chinese lunar exploration project formulated in the early 2000s. Orbiters Chang’e-1 and 2 and subsequent landing and roving missions Chang’e-3 and 4 marked the first two stages.

Chang’e-5 was originally scheduled for launch in late 2017. A Long March 5 failure in July that year delayed the mission and China’s space station project.

As with earlier phases the mission also has a backup, Chang’e-6. That mission will be repurposed for a sample return near the lunar south pole if Chang’e-5 proceeds according to plan.

China has stated it will then proceed into an extended phase of lunar exploration involving Chang’e-7and further lunar landing missions. The aim will be to establish an ‘international lunar research station’ in the mid-to-late 2020s as a precursor to crewed landings.

Sample return technology and experience developed through Chang’e-5 is also to be utilized for planned near Earth asteroid and Mars sample return missions later in the decade.

China plans to launch the Chang'e-5 lunar probe by the end of this year, a senior designer said at the ongoing 2020 China Space Conference in Fuzhou, capital of east China's Fujian Province, that will continue until Sept. 21.

Yu Dengyun, deputy chief designer of China's lunar exploration program, said preparations are progressing smoothly, and the Chang'e-5 probe will make a soft landing on the moon and bring samples back to Earth.

The Chang'e-5 probe is expected to realize lunar sample collection, takeoff from the moon, rendezvous and docking on lunar orbit and high-speed reentry into the Earth's atmosphere, marking breakthroughs in China's aerospace history, said Yu.

According to Yu, China is conducting a further verification study for the research and development of space station and the manned lunar mission, and it plans to set up an unmanned lunar research station for manned landings on the moon.

The conference that commenced on Friday is jointly hosted by the Chinese Society of Astronautics and the China Space Foundation. Enditem