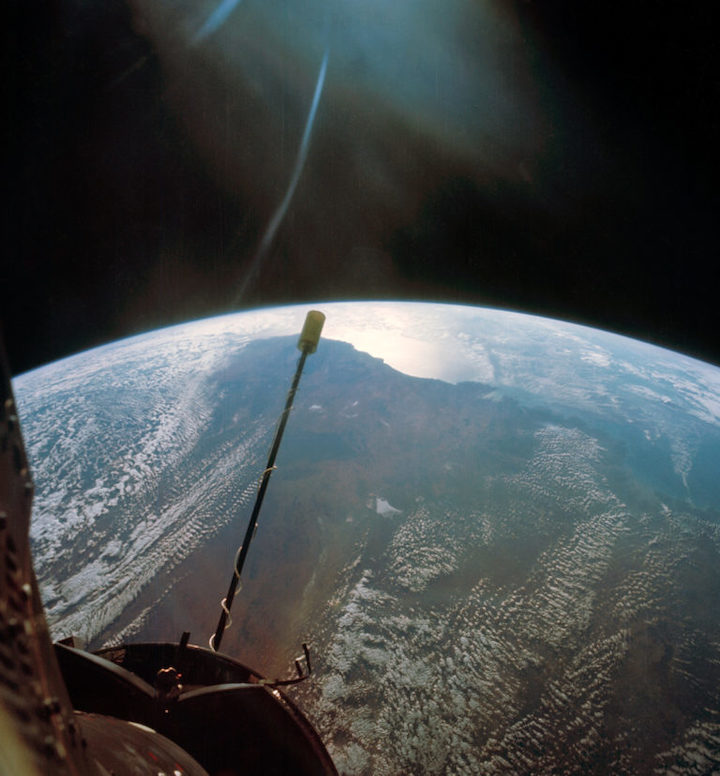 Sometime late next year, America will venture higher and further from Earth with a human-capable spacecraft than it has done since the end of the Apollo program, with the inaugural launch of the Space Launch System (SLS) and the Artemis-1 mission around the Moon. But although 24 men flew to lunar distance five decades ago, this weekend marks the anniversary of Gemini XI, launched on this day way back in 1966. Not only did Gemini XI astronauts Charles “Pete” Conrad and Dick Gordon perform rendezvous, docking and spacewalking during their three days in space, but they also set a record for the highest altitude ever reached by humans on a non-lunar space mission.

And, as with anything involving Conrad and Gordon, they also had a ton of fun doing it.

Not all astronauts get along, but if there was ever a crew whose members were best buddies, it was Conrad and Gordon. Their friendship long pre-dated their NASA careers, back to the late 1950s when they served together as U.S. Navy aviators aboard the aircraft carrier U.S.S. Ranger. A decade later, as astronauts, their camaraderie endured and they earned a reputation for being cocky, fun-loving, irreverent and intensely focused.

Nowhere would that focus be more tight than during the three days of Gemini XI. And the dizzying heights they would attain on that mission came on the shoulders of eight earlier manned flights which had seen America’s first spacewalk, a pair of world endurance records for long-duration spaceflight and rendezvous and physical docking with unmanned Agena target vehicles in space.

On Gemini XI, the envelope would be pushed still further by performing for the first time a docking with a 26-foot-long (7.8-meter) Agena target vehicle on their very first orbit of Earth (known as a “direct-ascent rendezvous”). This was a critical capability ahead of Project Apollo crews, in which the Command and Service Module (CSM) would need to find, rendezvous and dock with the ascent stage of the returning Lunar Module (LM) only hours after it had risen from the Moon’s surface.

“There was a lot of concern that it wasn’t going to be successful,” Gordon told Neil Armstrong’s biographer, James Hansen, in First Man. “For the Apollo application, the desire was to rendezvous as rapidly as possible, because the lifetime of the LM’s ascent stage was quite limited in terms of its fuel supply.”

To achieve this rendezvous, Gemini XI had to hit a two-second “launch window” and the crew would attempt to physically tether their ship to the Agena in order to evaluate the possibility of keeping two vehicles flying in formation without the need for fuel inputs or corrective control actions.

Additionally, they would go on to establish a world altitude record of 850 miles (1,370 km) for the highest altitude ever reached by human beings. Even today, Conrad and Gordon’s achievement still stands as the highest non-lunar altitude ever attained and the images from Gemini XI revealed Earth as never before.

Crew members were named to Gemini XI in March 1966 and Conrad’s assignment was inextricably linked to the mission’s targeted high altitude. He had learned of plans to fly Gemini around the Moon and, although such notions were rejected by NASA Administrator James Webb, Conrad pushed to use some of the fuel aboard the Agena to reach a high altitude.

One key concern was the potential damage caused by the Van Allen Radiation Belts, which reside at altitudes above 400 miles (640 km). Fortunately, Conrad’s backup crew included nuclear engineer Bill Anders, whom he promptly tasked with identifying techniques for avoiding their ferocity.

With the high-altitude objective approved, another key target was to somehow tether Gemini XI to the Agena and establish better station-keeping between two spacecraft in formation. Engineers recommended a nylon or Dacron line some 160 feet (48 meters) long could produce a reasonable amount of cable tension.

Ultimately, the cable chosen was about 100 feet (30 meters) long and the only major concern was figuring out how to free Gemini XI from the Agena in the event of problems. It was decided to fire a pyrotechnic charge and, should that fail, to snap a break line in the tether with a small separation velocity.

The elephant in the room, however, was achieving rendezvous with the target on Conrad and Gordon’s first orbit of Earth. Within NASA, it was known as an “M=1” rendezvous, and it had been suggested several years earlier by Richard Carley of the Gemini Project Office, in response to Apollo managers’ concerns that such practice was needed to produce a close approximation of Lunar Orbit Rendezvous (LOR).

There was much skepticism that it would work, to such an extent that William Schneider—deputy director for Mission Operations at the Manned Spacecraft Center (MSC) in Houston, Texas—bet the review board’s chairman, James Elms, a dollar that a first-orbit rendezvous could not be done with the required economy of on-board propellant.

As if this was not enough, spacewalking remained a worry. “Neutral buoyancy” training in a water tank had been trialed for the first time in mid-1966 and was being billed as the closest analog to the real thing. Astronaut Gene Cernan, who endured a particularly harrowing EVA on Gemini IX-A in June 1966, was the first to utilize the new training aid and found that it did approximate his efforts and difficulties in open space.

By the end of the summer, Gemini XI sat patiently on Pad 19 at Cape Kennedy, Fla., primed for liftoff on 9 September. A minute leak in the first-stage oxidizer tank of its Titan II rocket produced a 24-hour delay, but when Conrad and Gordon were en-route to the pad on the 10th it became clear that their Agena target was experiencing pre-launch checkout problems with its autopilot.

The countdown was halted as engineers scrambled to rectify the glitch, but were unable to do so in time to meet the “launch window” and the attempt was scrubbed.

Early on 12 September, the astronauts were sealed inside their spacecraft and their Agena target roared into space atop an Atlas booster at 8:05 a.m. EDT. The first stage of the mission was underway. Now came the big test: launching Gemini XI within its incredibly narrow, two-second window.

“Rocketeers of the Forties, Fifties and early Sixties,” wrote Barton Hacker and James Grimwood in their seminal work On the Shoulders of Titans, “would have been aghast at the idea of having to launch within two ticks of the clock.” But, aghast or not, Conrad and Gordon’s Titan II thundered into orbit at 9:42:26.5 a.m. EDT, just a half-second into the two-second window.

Six minutes later, on the edge of space, Mission Control notified them that their ascent and Titan II performance had been “right on the money” and they were cleared for the M=1 rendezvous with the Agena. Their first step was the Insertion Velocity Adjust Routine (IVAR) maneuver, whereby Conrad corrected their orbital path and placed them on track to “catch” the Agena, then about 300 miles (480 km) from them.

Next, he performed an out-of-plane maneuver and the two men switched on their rendezvous radar. Just as predicted in their training, they received an immediate electronic “lock-on” with the Agena. At the time of the maneuver, they were out of communications range with the ground, but when contact was re-established they were barely 60 miles (96 km) from their target.

Guided by Capcom John Young, seated at his console at the MSC in Houston, the astronauts moved ever closer. At one stage, with only 25 miles (40 km) between the two spacecraft, they were almost blinded as the Agena flashed into view with orbital sunrise above a glorious Pacific Ocean. The men scrambled for sunglasses as Conrad pulled Gemini XI into position, within 50 feet (15 meters) of their target.

As they passed over the California coastline a little more than 85 minutes after launch, Conrad and Gordon had pulled off the improbable: they had achieved the world’s fastest-ever rendezvous in orbit. Moreover, their propellant tanks still brimmed with 56 percent of their fuel reserves.

William Schneider lost his bet with James Elms. “I never lost a better dollar,” he said.

As for Conrad and Gordon, they were exuberant. They called Mission Control and sent a message directly to Flight Director Chris Kraft. “Mr. Kraft,” they radioed, “would you believe M equals 1?”