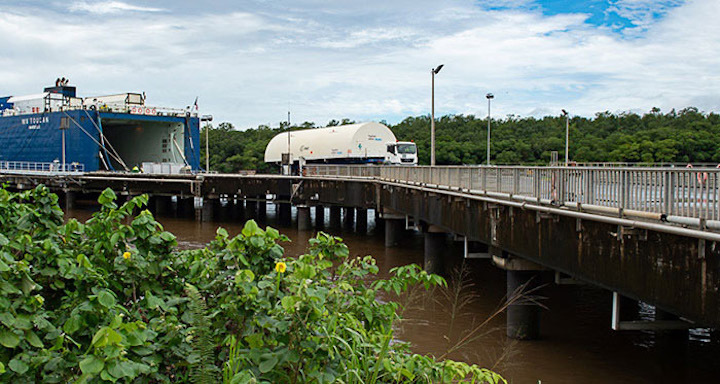 A pair of important arrivals this week – one by air, the other by sea – marked an acceleration of preparations at Europe’s Spaceport for Arianespace’s next two missions, to be performed from French Guiana with its lightweight Vega and heavy-lift Ariane 5 launch vehicles.

These parallel arrivals involved personnel who will conduct the first Vega “rideshare” mission, scheduled for mid-June to orbit 53 small satellite payloads; and Ariane 5 launch vehicle components for a three-passenger flight planned for liftoff this summer.

Team members for the Vega launch campaign were flown in aboard a chartered airliner that touched down at Félix Eboué Airport near the French Guiana capital city of Cayenne. They will be responsible for preparing this mission’s liftoff from the Vega Launch Complex (ZLV), located on the Kourou side of the Spaceport. 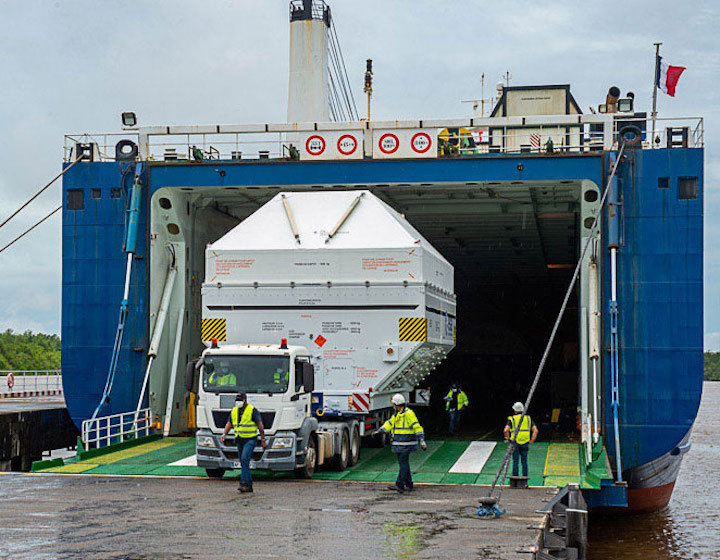 As the personnel were settling in, main launcher components for the Ariane 5 flight were being unloaded from the MN Toucan, one of two roll-on/roll-off sea-going ships operated for Arianespace, which docked at Paricabo Port near Kourou. After unloading, the components were to be taken by road to the Ariane 5’s ELA-3 launch complex – also situated on the Spaceport’s Kourou side.

Launch activities in French Guiana had been suspended mid-March because of the COVID-19 pandemic, and were gradually resumed – carried out in strict compliance with health rules published by the Prefect of French Guiana, as well as the French CNES space agency and the Guiana Space Center.

Designated Flight VV16 in Arianespace’s numbering system, Vega’s mission will be the first of the Small Spacecraft Mission Service (SSMS) – a program initiated by the European Space Agency (ESA) in 2016, with the contribution of the European Commission. For all the European partners involved, its purpose is to perfectly address the burgeoning microsatellite market for institutional and commercial customers alike.

The modular SSMS dispenser was designed to be as market-responsive as possible, able to accommodate a wide combination of payloads – from a main large satellite with smaller companions to multiple smaller satellites, or dozens of individual CubeSats.

Flight VV16 will be Arianespace’s fifth launch overall in 2020, and its first this year using the lightweight Vega member of its launch vehicle family – which also includes the heavy-lift Ariane 5 and medium-lift Soyuz.

The satellite passengers on Flight VV16 will be deployed by Vega to Sun-synchronous orbits. They will serve different types of applications, such as Earth observation, telecommunications, science and technology/education.

For Arianespace’s initial Ariane 5 mission following the resumption of operational activity at the Spaceport, its heavy-lift launcher will carry three payloads to geostationary transfer orbit: the Galaxy 30 and BSAT-4b telecommunications satellites, along with a Mission Extension Vehicle (MEV).

To be deployed as a Galaxy 30 “piggyback” payload is Northrop Grumman’s second Mission Extension Vehicle (MEV-2) – a servicing spacecraft that docks with an existing satellite in orbit to provide life-prolonging propulsion and attitude control. After deployment by Ariane 5, MEV-2 will service the Intelsat 10-02 satellite, which was launched in 2004.

Arianespace to launch three satellites towards Geostationary Orbit on July 28 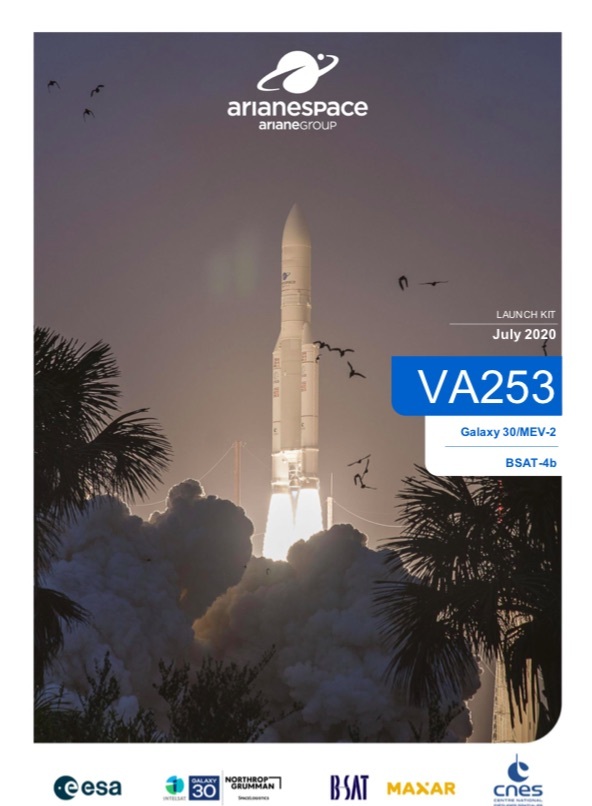 Final step in Ariane 5 latest performance improvement program decided in 2016, Flight VA253 brings the total increase in payload capacity to 300 kg since then.

The two of the three companies whose satellites are being launched are both long-standing customers – Intelsat for 37 years and B-SAT for 23 years – clearly proving the excellence of Arianespace’s service offering and long-term customer relations.

Since the reopening of the Guiana Space Center in French Guiana, teams from Arianespace and ArianeGroup have focused on preparing this very innovative mission under the best possible conditions.

Arianespace’s next Ariane 5 launch from the Guiana Space Center (CSG) in Kourou, French Guiana, is scheduled for Tuesday, July 28, in a launch window from 21:29 UTC to 22:15 UTC.

Satellites to be placed in orbit will serve Japanese B-SAT and operators Intelsat and Northrop Grumman’s SpaceLogistics LLC. BSAT-4b was built by the American company Maxar Technologies and will be used to broadcast Ultra-High-Definition (UHD, 4K and 8K) direct-to-home television broadcasting across Japan, in conjunction with its twin, BSAT-4a, also built by Maxar and launched by Arianespace in 2017.

The other two satellites on this mission were built by the American company Northrop Grumman: the Galaxy 30 UHD video distribution/broadcast and broadband satellite, built for the global network operator, Intelsat, will cover North America, and MEV-2 (Mission Extension Vehicle), a highly innovative satellite servicing vehicle designed to dock to satellites in orbit to provide life extension services. The first customer for MEV-2 will be the Intelsat 10-02 satellite, in geostationary orbit since 2004. MEV-2 will provide five years of service to this satellite.

This mission will use the Ariane 5 heavy-lift launcher, developed and manufactured by ArianeGroup, which has increased its payload capacity by 85 kg for this flight, thanks to the introduction of a new vehicle equipment bay (VEB), bringing total payload capacity into geostationary transfer orbit (GTO) to 10,200 kg. Since kicking off a continuous improvement program for Ariane 5 in 2016, ArianeGroup has increased this launcher’s payload capacity by 300 kg for the benefit of Arianespace. Their customers will continue to benefit from this enhanced performance on Ariane 5 for the rest of its missions.

The Ariane 5 launcher is a joint European government-industry program. Arianespace is responsible for marketing and operating Ariane 5 launches from the Guiana Space Center in Kourou, French Guiana, with support from the French space agency CNES and the European Space Agency (ESA). ArianeGroup is in charge of all design and production, from initial design studies, upgrades and manufacturing, to the supply of data and software for each mission. Its specific responsibilities include the production of equipment, structures and propulsion systems, integration of the different stages, and integration of the complete launcher in French Guiana. 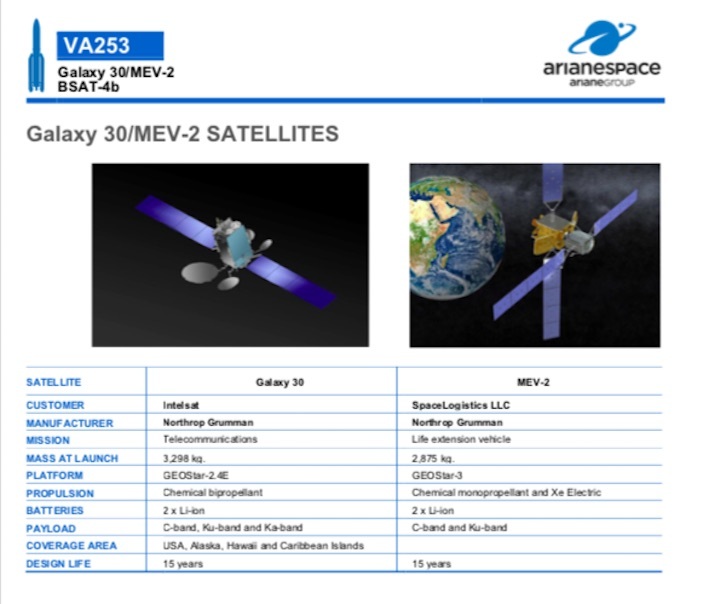 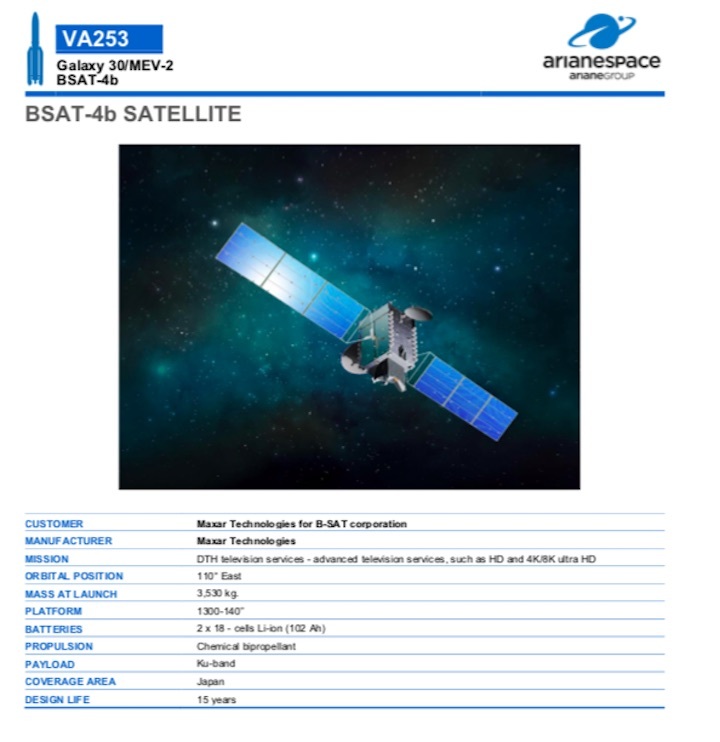 The next Ariane 5 launch is postponed

To enable additional technical checks required under the fairing and the Ariane dual launch system (SYLDA), the final phase of launch preparation operations for the 253rd Ariane flight (VA253) has not been initiated by Arianespace.

The soonest possible launch date for this mission is Friday, July 31 at:

The Ariane 5 launch vehicle and its three spacecraft payloads are in stable and safe condition.

Delay of Flight VA253 with Ariane 5

Flight VA253 has been postponed due to a “red” during the final countdown. The “red” was related to a sensor on the Ariane 5 cryogenic main stage’s liquid hydrogen fuel tank.

The Ariane 5 launch vehicle and its three spacecraft payloads are in stable and safe condition.

The soonest possible launch date is Saturday, August 1 at: