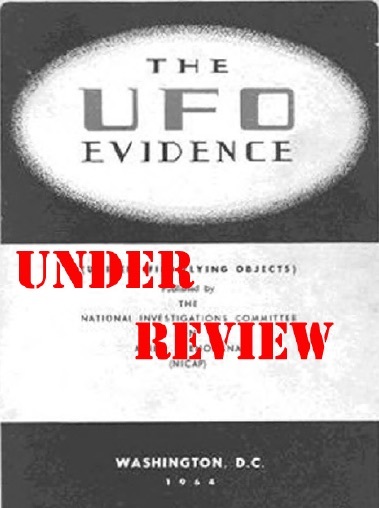 In section XII is a table with the following description:

Publisher and others saw bright disc hover over city for 15 minutes, sped away leaving a trail.

There is no source information listed.

NICAP usually took a lot of their information from newspaper stories. This is no different. There was a story about this sighting that was widely circulated in various papers across the country on March 10, 1950. It is important to note that if the story appeared on March 10th, the actual event happened on March 9th.

Project Blue Book also documented this case. They concluded that what was seen was a meteor. The case file had some newspaper clippings similar to the Statesville Daily Record story below (Flying saucers again reported). According to those accounts, the event started around 18:15 and ended around 18:30. The file also included a typed statement by an unnamed Army Agent, who observed the event, stated that he felt it was a vapor trail.

Blue Book got this one wrong. Despite having a clear description/identification of this being a contrail, they classified it as a meteor. Meteors don’t last for many minutes. Even bright ones usually last no longer than 15-20 seconds (although I have seen videos of them lasting longer). However, this had all the earmarks of it being a high altitude plane leaving a contrail. It happened around sunset (sunset being around 18:28) and all of the witnesses described a vapor trail of some kind. In 1950, airplane contrails were new because not many planes flew at high altitudes. Mistakes of this kind were being made elsewhere. On January 11, 1950, a B-50 bomber at 35,000 feet left a contrail that was observed by civilians in the San Francisco area. They reported this event as something exotic and these report made the news in the local region. It did not quite get the headlines that the Orangeburg incident got because it was rapidly identified.

Several of the descriptions also describe a bright object that was producing the contrail. This was probably the aircraft reflecting sunlight.

A contrail being visible for 15-20 minutes is not unheard of especially if it can be seen down to the horizon. I have seen such contrails especially in the month or so around the Spring and Fall Equinox, when the sun’s location on the horizon is more likely to illuminate contrails of westbound aircraft.