After analyzing data gathered when NASA’s OSIRIS-REx spacecraft collected a sample from asteroid Bennu in October 2020, scientists have learned something astonishing: The spacecraft would have sunk into Bennu had it not fired its thrusters to back away immediately after it grabbed dust and rock from the asteroid’s surface.

It turns out that the particles making up Bennu’s exterior are so loosely packed and lightly bound to each other that if a person were to step onto Bennu they would feel very little resistance, as if stepping into a pit of plastic balls that are popular play areas for kids.

“If Bennu was completely packed, that would imply nearly solid rock, but we found a lot of void space in the surface,” said Kevin Walsh, a member of the OSIRIS-REx science team from Southwest Research Institute, which is based in San Antonio.

The latest findings about Bennu’s surface were published on July 7 in a pair of papers in the journals Science and Science Advances, led respectively by Dante Lauretta, principal investigator of OSIRIS-REx, based at University of Arizona, Tucson, and Walsh. These results add to the intrigue that has kept scientists on the edge of their seats throughout the OSIRIS-REx mission, as Bennu has proved consistently unpredictable.

The asteroid presented its first surprise in December 2018 when NASA’s spacecraft arrived at Bennu. The OSIRIS-REx team found a surface littered with boulders instead of the smooth, sandy beach they had expected based on observations from Earth- and space-based telescopes. Scientists also discovered that Bennu was spitting particles of rock into space. 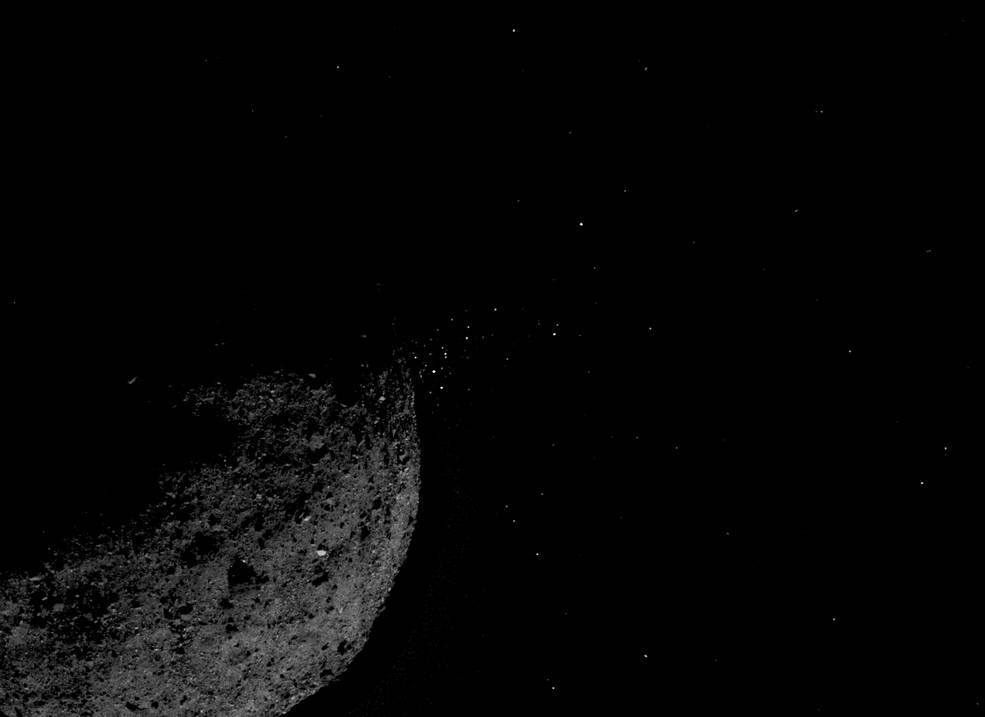 This view of asteroid Bennu ejecting particles from its surface on Jan. 19, 2019, was created by combining two images taken on board NASA’s OSIRIS-REx spacecraft. Other image processing techniques were also applied, such as cropping and adjusting the brightness and contrast of each image.
Credits: NASA/Goddard/University of Arizona/Lockheed Martin

“Our expectations about the asteroid’s surface were completely wrong” said Lauretta.

The latest hint that Bennu was not what it seemed came after the OSIRIS-REx spacecraft picked up a sample and beamed stunning, close-up images of the asteroid’s surface to Earth. “What we saw was a huge wall of debris radiating out from the sample site,” Lauretta said. “We were like, ‘Holy cow!’”

Scientists were bewildered by the abundance of pebbles strewn about, given how gently the spacecraft tapped the surface. Even more bizarre was that the spacecraft left a large crater that was 26 feet (8 meters) wide. “Every time we tested the sample pickup procedure in the lab, we barely made a divot,” Lauretta said. The mission team decided to send the spacecraft back to take more photographs of Bennu’s surface “to see how big of a mess we made,” Lauretta said.

Near-Earth asteroid Bennu is a rubble pile of rocks and boulders left over from the formation of the solar system. On October 20, 2020, NASA’s OSIRIS-REx spacecraft briefly touched down on Bennu and collected a sample for return to Earth. During this event the spacecraft’s arm sank far deeper into the asteroid than expected, confirming that Bennu’s surface is loosely bound. Now, scientists have used data from OSIRIS-REx to revisit the sample-collection event and better understand how Bennu’s loose upper layers are held together.
Credits: NASA’s Goddard Space Flight Center/CI Lab/SVS

Mission scientists analyzed the volume of debris visible in before and after images of the sample site, dubbed “Nightingale.” They also looked at acceleration data collected during the spacecraft’s touch down. This data revealed that as OSIRIS-REx touched the asteroid it experienced the same amount of resistance – very little – a person would feel while squeezing the plunger on a French press coffee carafe. “By the time we fired our thrusters to leave the surface we were still plunging into the asteroid,” said Ron Ballouz, an OSIRIS-REx scientist based at the Johns Hopkins Applied Physics Laboratory in Laurel, Maryland.

Ballouz and the research team ran hundreds of computer simulations to deduce Bennu’s density and cohesion based on spacecraft images and acceleration information. Engineers varied the surface cohesion properties in each simulation until they found the one that most closely matched their real-life data.

Now, this precise information about Bennu’s surface can help scientists better interpret remote observations of other asteroids, which could be useful in designing future asteroid missions and for developing methods to protect Earth from asteroid collisions.

It’s possible that asteroids like Bennu — barely held together by gravity or electrostatic force — could break apart in Earth’s atmosphere and thus pose a different type of hazard than solid asteroids. “I think we’re still at the beginning of understanding what these bodies are, because they behave in very counterintuitive ways,” said Patrick Michel, an OSIRIS-REx scientist and director of research at the Centre National de la Recherche Scientifique at Côte d’Azur Observatory in Nice, France.

Goddard provides overall mission management, systems engineering, and the safety and mission assurance for OSIRIS-REx. Dante Lauretta of the University of Arizona, Tucson, is the principal investigator. The university leads the science team and the mission's science observation planning and data processing. Lockheed Martin Space in Littleton, Colorado, built the spacecraft and provides flight operations. Goddard and KinetX Aerospace are responsible for navigating the OSIRIS-REx spacecraft. OSIRIS-REx is the third mission in NASA's New Frontiers Program, managed by NASA's Marshall Space Flight Center in Huntsville, Alabama, for the agency's Science Mission Directorate Washington.

Banner image caption: Side-by-side images from NASA's OSIRIS-REx spacecraft of the robotic arm as it descended towards the surface of asteroid Bennu (left) and as it tapped it to stir up dust and rock for sample collection (right). OSIRIS-REx touched down on Bennu at 6:08pm EDT on October 20, 2020. Credits: NASA's Goddard Space Flight Center.