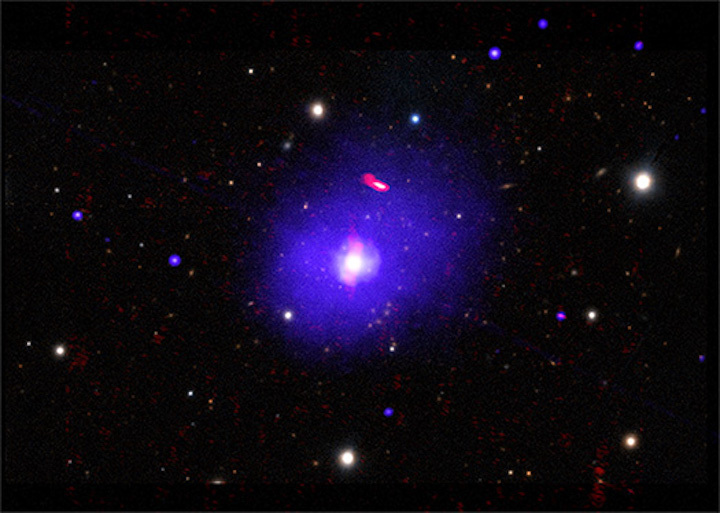 Astronomers have made a record-breaking measurement of a black hole's spin, one of two fundamental properties of black holes. NASA's Chandra X-ray Observatory shows this black hole is spinning slower than most of its smaller cousins.

This is the most massive black hole with an accurate spin measurement and gives hints about how some of the universe's biggest black holes grow.

"Every black hole can be defined by just two numbers: its spin and its mass," said Julia Sisk-Reynes of the Institute of Astronomy (IoA) at the University of Cambridge in the U.K., who led the new study. "While that sounds fairly simple, figuring those values out for most black holes has proved to be incredibly difficult."

For this result, researchers observed X-rays that bounced off a disk of material swirling around the black hole in a quasar known as H1821+643. Quasars contain rapidly growing supermassive black holes that generate large amounts of radiation in a small region around the black hole. Located in a cluster of galaxies about 3.4 billion light-years from Earth, H1821+643's black hole is between about three and 30 billion solar masses, making it one of the most massive known. By contrast the supermassive black hole in the center of our galaxy weighs about four million Suns.

The strong gravitational forces near the black hole alter the intensity of X-rays at different energies. The larger the alteration the closer the inner edge of the disk must be to the point of no return of the black hole, known as the event horizon. Because a spinning black hole drags space around with it and allows matter to orbit closer to it than is possible for a non-spinning one, the X-ray data can show how fast the black hole is spinning.

"We found that the black hole in H1821+643 is spinning about half as quickly as most black holes weighing between about a million and ten million suns," said co-author Christopher Reynolds, also of the IoA. "The million-dollar question is: why?"

The answer may lie in how these supermassive black holes grow and evolve. This relatively slow spin supports the idea that the most massive black holes like H1821+643 undergo most of their growth by merging with other black holes, or by gas being pulled inwards in random directions when their large disks are disrupted.

Supermassive black holes growing in these ways are likely to often undergo large changes of spin, including being slowed down or wrenched in the opposite direction. The prediction is therefore that the most massive black holes should be observed to have a wider range of spin rates than their less massive relatives.

On the other hand, scientists expect less massive black holes to accumulate most of their mass from a disk of gas spinning around them. Because such disks are expected to be stable, the incoming matter always approaches from a direction that will make the black holes spin faster until they reach the maximum speed possible, which is the speed of light.

"The moderate spin for this ultramassive object may be a testament to the violent, chaotic history of the universe's biggest black holes," said co-author James Matthews, also of the IoA. "It may also give insights into what will happen to our galaxy's supermassive black hole billions of years in the future, when the Milky Way collides with Andromeda and other galaxies."

This black hole provides information that complements what astronomers have learned about the supermassive black holes seen in our galaxy and in M87, which were imaged with the Event Horizon Telescope. In those cases, the black hole's masses are well known, but the spin is not.

A paper describing these results from Sisk-Reynes and her collaborators appears in the Monthly Notices of the Royal Astronomical Society and is available at https://arxiv.org/abs/2205.12974