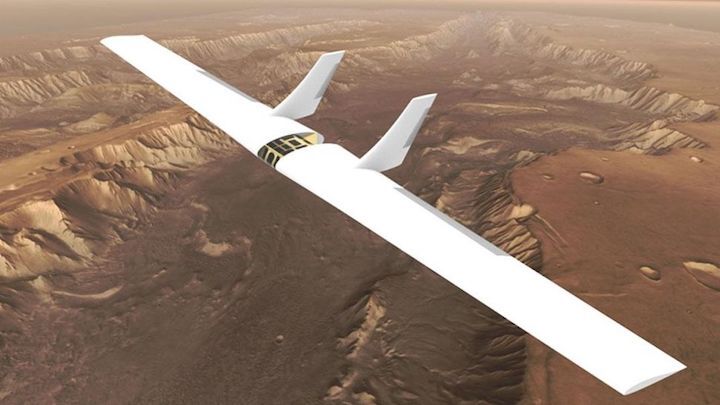 Artist's conception of a sailplane flying over Mars. (Image credit: University of Arizona)

An early-stage Martian sailplane soared aloft, tethered to a balloon, as engineers ponder the possibilities to expand Red Planet flight.

The University of Arizona released a progress update on its sailplane project June 30 in conjunction with a recent journal publication exploring Mars exploration using motorless sailplanes.

Drone flight has been tested successfully on Mars already. The Ingenuity test helicopter that landed with NASA's Perseverance rover in February 2021 is over a year and almost 30 flights into what was supposed to be a monthlong, five-flight campaign, and is still going.

But as pathfinding as Ingenuity is, its capabilities are limited: it can only fly for three minutes at a time, and only as high as 39 feet (12 meters). Sailplanes, if proven, might be able to fly further and faster using horizontal wind speeds that blow swiftly at higher altitudes of Mars, Arizona team members said in the statement(opens in new tab).

Now, the team says it has an early-stage design of the sailplane and has put that design on a high-altitude balloon. Later in the summer, officials stated, researchers "will test experimental planes at about 15,000 feet [4,570 meters] above sea level, where Earth's atmosphere is thinner and flight conditions are more akin to those on Mars." 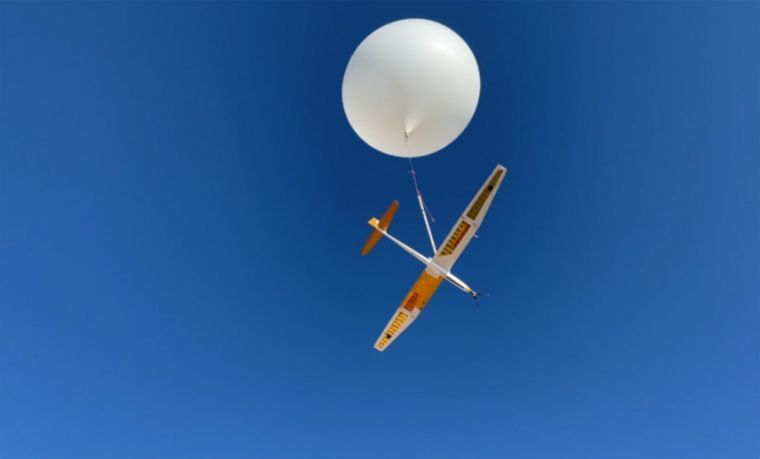 A Martian sailplane prototype during a tethered flight test on a balloon. (Image credit: University of Arizona)

If deployed on the Red Planet, the sailplane could fly tens of meters (or feet) above the surface to nab higher-resolution imagery than is available today from satellites in orbit. The proposed 11-pound (5 kilograms) vehicle would be filled with flight, temperature and gas sensors along with cameras to image steep areas inaccessible to rovers, such as canyons and volcanoes.

"This is where all the exchanges between the surface and atmosphere happen," Alexandre Kling, a research scientist in NASA's Mars Climate Modeling Center partnering with the university, said of the low-altitude region the sailplane would study.

"This is where the dust is picked up and sent into the atmosphere, where trace gases are mixed, where the modulation of large-scale winds by mountain-valley flows happen. And we just don't have very much data about it," Kling added.

The final-stage design proposed in the peer-reviewed research paper(opens in new tab), published in the journal Aerospace on June 3, suggests the sailplane will be able to map surface features at less than 100 centimeters per pixel. (That's just a bit smaller than the 4-pound or 2-kg Ingenuity's wingspan.)

Based on mathematical modeling for the sailplanes' flight patterns, the team suggests their vehicle could stay aloft for as long as multiple days at a time, using a technique called dynamic soaring. University officials compared the technique to an albatross's use of higher horizontal wind speeds at higher altitudes.

"The main question [in the design] is: How can you fly for free? How can you use the wind that's there, the thermal dynamics that are there, to avoid using solar panels and relying on batteries that need to be recharged?" lead author Adrien Bouskela, an aerospace engineering doctoral student at the university, said in the press release.

The mission is not yet funded for Red Planet flight, but the team says it might be able to get ready in just a few years, rather than the typical decades of planning that traditional Mars missions require.

Team members estimate that the cost of the sailplane would be $100 million or less, compared with a NASA Discovery-class mission of at least $300 million, similar in scale to the Marsquake-hunting InSight lander in service since 2018.

"A defining advantage of this sailplane concept over previous proposals is its simplicity," researchers wrote in the press release, noting the lack of an engine will be especially helpful as it does not create "significant penalty on mass, complexity, and reliability to take flight."

As for how the plane would get so high above the Red Planet, the balloon testing on Earth might be replicated for real on Mars. Sailplanes could be carried up high, then released when wind conditions are ready to support a long mission.

"The sailplanes could even potentially redock on the balloon or blimp after a flight and go on to complete multiple missions," the researchers stated. Even if the plane lands and is unable to get back into the atmosphere, it could take measurements from the surface as an impromptu weather station, they suggest.

"The team ultimately hopes NASA will fund the mission and allow it to 'catch a ride' on a large-scale Mars mission already in development," researchers added, saying the sailplane could even fit in a small cubesat-sized package.