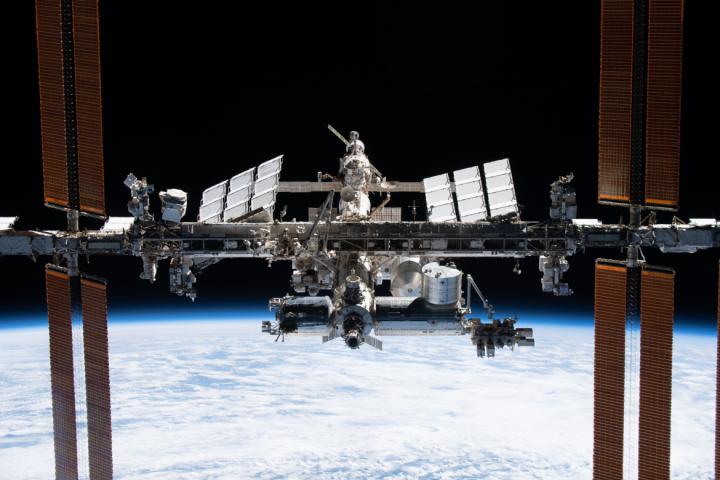 NASA issued a statement rebuking cosmonauts' display of a pro-Russian separatist flag on the International Space Station this week, a rare move for the agency that espouses the outpost as a place for international cooperation.

"The entire territory of the Luhansk People's Republic has been liberated," Roscosmos said in the post. "Russian and Lugansk forces have established full control over Lisichansk – the last major city in the LPR!"

The cosmonauts also held another flag, this time showing support for another Donbas region: the Donetsk People's Republic. Russia has been fighting Ukrainian forces to seize the area.

"Citizens of the allied Donetsk People's Republic, wait!" Roscosmos said, insinuating that Russian victory there is just around the corner.

NASA was quick to rebuke the cosmonauts' display of the flags, a move typically unseen from the agency that has to carefully toe the line between not only U.S. and Russian developments, but also 13 other international partners that use the ISS.

"NASA strongly rebukes Russia using the International Space Station for political purposes to support its war against Ukraine," NASA said in a Thursday release. "(It) is fundamentally inconsistent with the station’s primary function among the 15 international participating countries to advance science and develop technology for peaceful purposes.”

The cosmonauts' display of separatist flags seemingly contradicts their actions from early in Russia's invasion. In March, the same three cosmonauts wore bright yellow-and-blue flight suits during a livestream on the ISS, hinting at support for Ukraine. The suits were not in Russia's regular rotation of designs and Soyuz commander Artemyev blamed the accumulation of leftover fabrics.

"Each crew chooses their own suits and overalls so that everyone is not the same," Soyuz commander Artemyev said in March. "There are a lot of fabrics accumulated in yellow and it was necessary to start using them."

Including American and European astronauts, there are 10 people currently stationed aboard the ISS.

The next vehicle destined for the outpost, meanwhile, is now slated to fly from Kennedy Space Center's pad 39A no earlier than Thursday, July 14. An uncrewed SpaceX Dragon capsule will take thousands of pounds of cargo, supplies, and science experiments at 8:44 p.m. ET that day and spend about a month docked before returning to Earth.