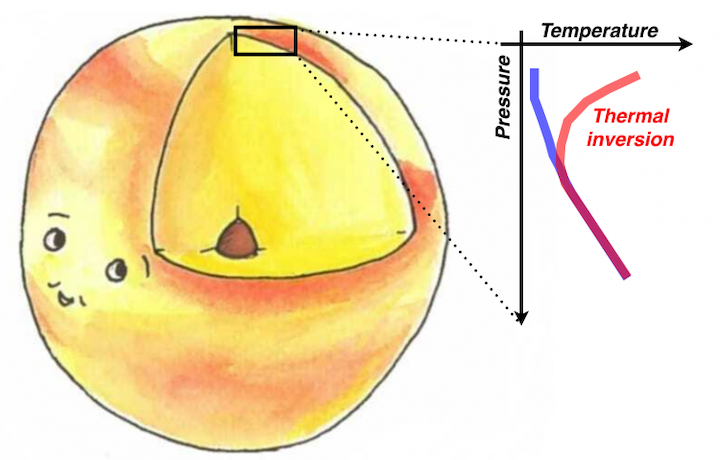 The thermal structure of hot gas giant exoplanet atmospheres is likely to be inverted for the hottest planets, a class of planets known as ultra-hot Jupiters. This is the conclusion from astrophysicists based at the University of Amsterdam (UvA) in collaboration with an international team from the United States and the United Kingdom.

They were searching for statistical signatures of elusive inverted atmospheres with data from the late Spitzer Space Telescope. They found that planets above 1700 Kelvin (around 1400℃) displayed different emission properties than their cooler counterparts, indicating temperature inversions in the hottest planets and supporting previous theoretical predictions. This research has been published online in Astronomy & Astrophysics.

Amsterdam PhD candidate Claire Baxter: “The planets show temperature inversion above 1700K, which seems to get stronger with stellar radiation.” According to associate professor Jean-Michel Désert, this is somewhat comparable to what happens around our own earth: "Temperature inversion takes place in the earth's atmosphere due to the presence of ozone."

The team used observations of the daysides of 78 hot gas giant planets taken with the Spitzer Space Telescopes Infrared Array Camera. The team observed the emission of these planets in two wavelength bandpasses. This technique of emission photometry provides information about the temperature of different pressure layers of the planet's atmosphere. Of the two wavelengths observed, one is expected to probe deeper in the atmosphere whereas the other probes higher altitudes.

They found that as the temperature of the planets in their survey reached temperatures as high as 1700K, they started to see a signature of an inversion. This signal can be very small for each individual planet, however, many hot planets with the same small signal added up. This supports the previous theoretical work that the temperature structure of the hottest gas giant planets is thermally inverted

Désert concludes: “During the past two decades we have looked at the atmospheres of individual exoplanets, but now we are entering the era of statistical studies to reveal common properties of planetary systems.”