Testing a new, direct method for determining the masses of supermassive black holes 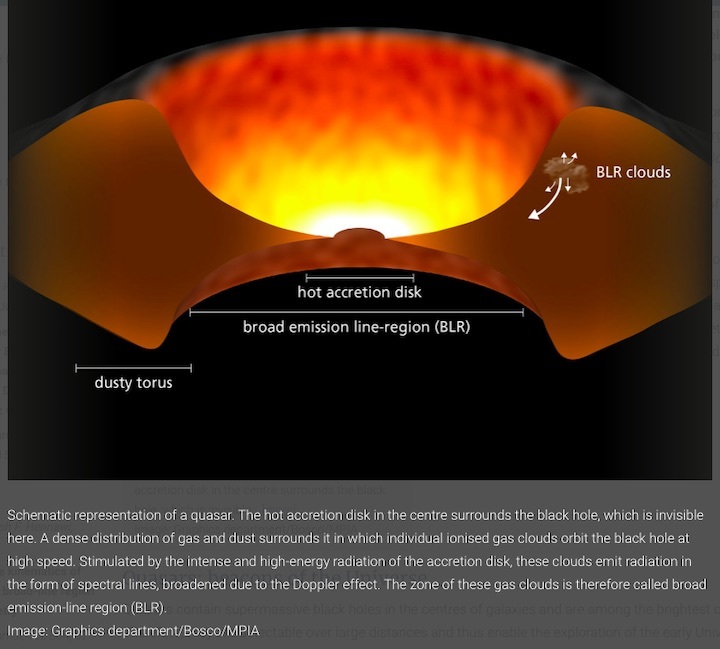 Astronomers of the Max Planck Institute for Astronomy have, for the first time, successfully tested a new method for determining the masses of extreme black holes in quasars. This method is called spectroastrometry and is based on the measurement of radiation emitted by gas in the vicinity of supermassive black holes. This measurement simultaneously determines the rotational velocity of the radiating gas and its distance from the centre of the accretion disk from which material flows into the black hole. Compared to other methods, spectroastrometry is relatively straightforward and efficient if performed with modern large telescopes. The high sensitivity of this method permits investigating the surroundings of luminous quasars and supermassive black holes in the early Universe.

In cosmology, determining the mass of supermassive black holes in the young Universe is an important measurement for tracking the temporal evolution of the cosmos. Now Felix Bosco, in close collaboration with Jörg-Uwe Pott, both from the Max Planck Institute for Astronomy (MPIA) in Heidelberg, and former MPIA researchers Jonathan Stern (now Tel Aviv University, Israel) and Joseph Hennawi (now UC Santa Barbara; USA and Leiden University, The Netherlands), has succeeded for the first time in demonstrating the feasibility of directly determining the mass of a quasar using spectroastrometry.

This method allows the mass of distant black holes in luminous quasars to be determined directly from optical spectra, without the need for extensive assumptions about the spatial distribution of gas. The spectacular applications of spectroastrometric measurements of quasar masses were systematically investigated at MPIA several years ago.

Quasars: beacons of the Universe

Quasars contain supermassive black holes in the centres of galaxies and are among the brightest cosmic objects. Therefore, they are detectable over large distances and thus enable the exploration of the early Universe.

If there is gas near a black hole, it cannot fall into it directly. Instead, an accretion disk forms, a vortex that helps the matter flow into the black hole. High frictional forces in this stream of gas, which ultimately feeds the black hole, heat the accretion disk typically to fifty thousand degrees. The intensity of the radiation emitted in the process makes the quasars appear so bright that they outshine all the stars in the galaxy.

Other components within quasars have been known for several decades, such as the so-called “broad emission-line region” (BLR), a zone in which ionised gas clouds orbit the central black hole at speeds of several thousand kilometres per second. The intense and energetic radiation from the accretion disk stimulates emission from the gas in the BLR, which is visible in the spectra in the form of spectral lines. However, due to the Doppler effect, they are strongly broadened by the high orbital velocities, thus giving the BLR its name. 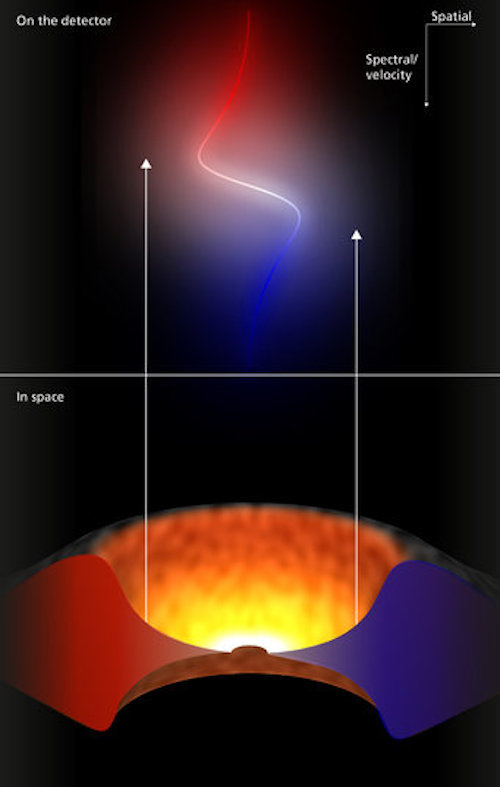 Schematic representation of the origin of the spectroastrometry signal. If the ionised gas were at rest, we would…

Now, Felix Bosco and his colleagues have measured the optically brightest spectral line of hydrogen (Hα) in the BLR of the quasar J2123-0050 in the constellation Aquarius. Its light stems from a time when the Universe was just 2.9 billion years old. Using the method of spectroastrometry, they have determined the putative distance of the radiation source in the BLR to the centre of the accretion disk, the location of the potential supermassive black hole. At the same time, the Hα line provides the radial velocity of the hydrogen gas, i.e., that velocity component that points towards Earth. Just as the mass of the Sun determines the orbital velocities of the planets in the solar system, the mass of the black hole at the centre of the quasar can be precisely deduced from this data if the gas distribution can be spatially resolved.

Even for today’s large telescopes, however, the extent of the BLR is far too small for this. “However, by separating spectral and spatial information in the collected light, as well as by statistically modelling the measured data, we can derive distances of much less than one image pixel from the centre of the accretion disk,” Felix Bosco explains. The duration of the observations determines the precision of the measurement.

For J2123-0050, the astronomers calculated a black hole mass of at most 1.8 billion solar masses. “The exact mass determination was not yet the main goal of these first observations at all,” says Jörg-Uwe Pott, co-author and head of the “Black Holes and Accretion Mechanisms” working group at MPIA. “Instead, we wanted to show that the spectroastrometry method can in principle detect the kinematic signature of the central quasar masses using the 8-metre telescopes already available today.” Spectroastrometry could thus be a valuable addition to the tools that researchers use to determine black hole masses. Joe Hennawi adds, “With the significantly increased sensitivity of the James Webb Space Telescope (JWST) and the Extremely Large Telescope (ELT with a primary mirror diameter of 39 metres) currently under construction, we will soon be able to determine quasar masses at the highest redshifts.” Jörg-Uwe Pott, who also leads the Heidelberg contributions to ELT’s first near-infrared camera, MICADO, adds, “The feasibility study now published helps us to define and prepare our planned ELT research programmes.”

Among the alternatives for surveying BLR in nearby quasars is a widely used method: “Reverberation Mapping” (RM). It employs the light transit time any brightness fluctuation in the accretion disk needs to excite the surrounding gas to increased radiation. From this, astronomers estimate the mean extent of the BLR. Besides the sometimes considerable uncertainties in the assumptions, this method has decisive disadvantages compared to spectroastrometry when investigating the most massive and distant black holes. The diameter of the BLR correlates with the mass of the central black hole. Hence, the signal delay between the accretion disk and the BLR becomes very large for massive black holes in the early Universe. The necessary series of measurements of several years become impractically long.

Moreover, the brightness fluctuations and measurability tend to decrease with increasing black hole mass and quasar luminosity. The RM method is, therefore, rarely applicable to luminous quasars. As a result, it is not suitable for measuring quasars at large cosmological distances.

However, the RM serves as a basis for calibrating other indirect methods first established for nearby quasars and then extended to more distant, luminous quasars with massive black holes. The quality of these indirect approaches stands and falls with the accuracy of the RM method. Here, too, spectroastrometry can help put the mass determination of massive black holes on a broader basis. For example, evaluating the data from J2123-0050 indicates that the correlation between the size of the BLR and the quasar luminosity, initially established with the RM method for rather close, faint quasars, actually seems to hold for luminous quasars as well. However, further measurements are needed here. 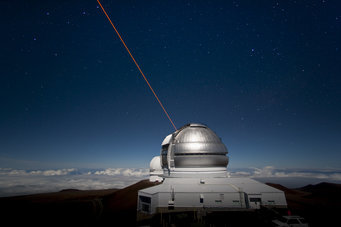 Photo of the dome of the Gemini North telescope in Hawaii, USA. This telescope has a primary mirror diameter of 8.1 metres and a laser guide star that, together with adaptive optics, helps minimise the influence of the atmosphere on observations. Gemini North was used for the spectroastrometry feasibility study.

The BLR can also be measured interferometrically in nearby active galaxies, such as with the GRAVITY instrument of the Very Large Telescope Interferometer (VLTI). The great advantage of spectroastrometry, however, is that only a single highly-sensitive observation is needed. In addition, it requires neither the technically very complex coupling of several telescopes as required by interferometry nor long series of measurements over months and years as is the case with the RM. For example, a single series of observations with an exposure time of four hours with the 8-metre-class Gemini North telescope in Hawaii, supported by a correction system consisting of a laser guide star and adaptive optics, was sufficient for the research group led by Felix Bosco.

Opening a new door to the exploration of the early Universe

Researchers have high hopes for the next generation of large optical telescopes such as ESO’s ELT. Combining an enlarged light-collecting surface with fivefold increased image sharpness would make the observation presented here possible in just a few minutes at the ELT. Felix Bosco explains, “We will use the ELT to astrometrically measure numerous quasars at different distances in a single night, allowing us to observe the cosmological evolution of black hole masses directly.” With the successful astrometric feasibility study, the authors have pushed wide open a new door to the exploration of the early Universe.