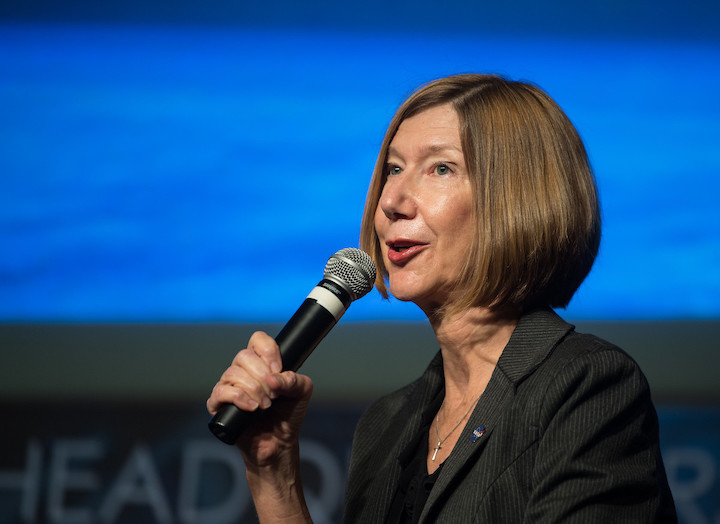 NASA announced Tuesday that the agency’s human spaceflight division will split into two new mission directorates, one focused on space operations and another on deep space exploration, returning to the organizational structure of a decade ago.

The new Space Operations Mission Directorate will oversee mature human spaceflight programs, such as the International Space Station and commercial crew and cargo missions. The operations directorate is also in charge NASA’s efforts to commercialize low Earth orbit, an objective the agency hopes will lead to privately-owned space stations.

The Exploration Systems Development Mission Directorate will manage NASA’s Artemis moon program, including the Space Launch System heavy-lift rocket, the Orion spacecraft, and the Human Landing System, the spacecraft that will carry astronauts to and from the lunar surface.

The change will dissolve the Human Exploration and Operations Mission Directorate, or HEOMD, which NASA established in 2011 to combine the previous operations and exploration directorates after the retirement of the space shuttle and the cancellation of the Constellation moon program.

Contracts for most elements of NASA’s Artemis program have already been awarded. Most recently, SpaceX won a contract from NASA to develop a version of its Starship space vehicle as a crew-rated lander for the the first Artemis moon landing mission.

“We’ve had this phenomenal success in the commercial arena,” said NASA Administrator Bill Nelson. “The growth has been so large that the … previous HEO is almost half the budget of NASA. And you need to have the ability to have two brilliant people to run the respective responsibilities. One, basically, space operations, and two, the exploration as we go back to the moon and on to Mars.”

“The last decade has seen extraordinary change and growth,” said Pam Melroy, a former astronaut and NASA’s deputy administrator. “The impact that NASA has had on commercial space has created new capabilities that we didn’t even know we could rely on, but they’re going to help us tremendously as we go out into the solar system.

“This is exactly the time for us to take a deep breath and say, ‘Wow, we have a chain of development programs, no longer just one monolithic program. How are we going to manage this huge change in scope.’ As we prepare to fly Artemis 1, this is a good time to take this step,” Melroy said.

The Artemis 1 mission — the first test flight of NASA’s Space Launch System moon rocket with an Orion spacecraft — is scheduled for launch late this year or in early 2022, Nelson said. The unpiloted Artemis 1 test flight will pave the way for future Artemis crew missions to the moon.

“Creating two separate mission directorates will ensure these critical areas have focused oversight teams in place to support and execute for mission success,” NASA said in a statement. “This approach with two areas focused on human spaceflight allows one mission directorate to operate in space while the other builds future space systems, so there is a constant cycle of development and operations to advance NASA’s goals in space exploration.”

Ongoing development programs, such as the Space Launch System and Orion, will migrate from exploration development to space operations as they mature. For the Orion spacecraft, that may come after the completion of the Artemis 2 mission, the first Orion flight with astronauts, Free said.

The Space Launch System is likely to remain in the exploration development directorate until after the debut of an upgraded “Block 1B” variant later in the 2020s, according to Free.