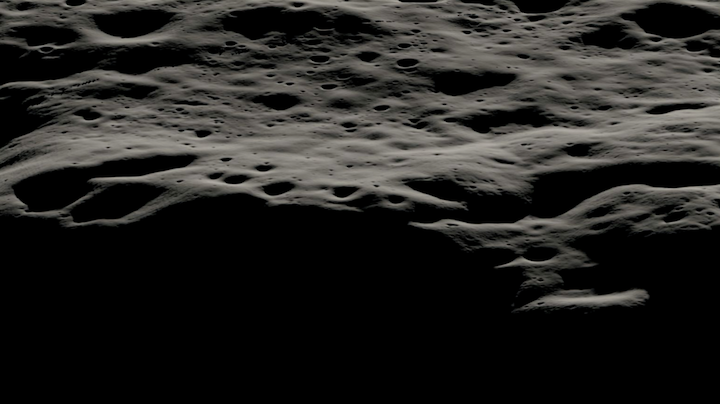 A data visualization showing the mountainous area west of Nobile Crater and the smaller craters that litter its rim at the lunar South Pole. The region features areas permanently covered in shadow as well as areas that are bathed in sunlight most of the time. The terrain in the Nobile region is most suitable for the VIPER rover to navigate, communicate, and characterize potential water and other resources.
Credits: NASA

In 2023, NASA’s Volatiles Investigating Polar Exploration Rover (VIPER) will land near the western edge of the Nobile Crater at the Moon’s South Pole to map and explore the region’s surface and subsurface for water and other resources. Part of Artemis, VIPER will launch on a SpaceX Falcon-Heavy rocket for delivery to the Moon by Astrobotic’s Griffin lander under NASA’s Commercial Lunar Payload Services initiative.

The Moon’s South Pole is one of the coldest areas in our solar system. No prior missions to the Moon’s surface have explored it – scientists have thus far only studied the region using remote sensing instruments, including those on NASA’s Lunar Reconnaissance Orbiter and the Lunar Crater Observation and Sensing Satellite.

Data from these and other missions helped scientists conclude that ice and other potential resources exist in permanently shadowed areas of the Moon near the poles. After an extensive landing site selection process, the mountainous area west of Nobile Crater was chosen as VIPER’s landing site due to its rover-accessible terrain and array of nearby sites of scientific interest, including permanently shadowed areas.

“Once on the lunar surface, VIPER will provide ground truth measurements for the presence of water and other resources at the Moon’s South Pole, and the areas surrounding Nobile Crater showed the most promise in this scientific pursuit” said Thomas Zurbuchen, associate administrator for science at NASA Headquarters. “The data VIPER returns will provide lunar scientists around the world with further insight into our Moon’s cosmic origin, evolution, and history, and it will also help inform future Artemis missions to the Moon and beyond by enabling us to better understand the lunar environment in these previously unexplored areas hundreds of thousands of miles away.”

Nobile Crater is an impact crater that was formed through a collision with another smaller celestial body, and is almost permanently covered in shadows, allowing ice to exist there. Smaller, more accessible craters surrounding Nobile’s perimeter, will also provide VIPER with ideal locations to investigate in its search for ice and other resources.

“Selecting a landing site for VIPER is an exciting and important decision for all of us,” Daniel Andrews, VIPER project manager, said. “Years of study have gone into evaluating the polar region VIPER will explore. VIPER is going into uncharted territory—informed by science—to test hypotheses and reveal critical information for future human space exploration.”

NASA’s team evaluated viable rover traverse paths, taking into account where VIPER could use its solar panels to charge and stay warm during its 100-day journey. The area near Nobile Crater provided a lot of flexibility.

“Our evaluation of the landing site was driven by science priorities,” said Anthony Colaprete, VIPER lead project scientist at NASA's Ames Research Center in Silicon Valley, California. “We seek answers to some pretty complex questions and studying these resources on the Moon that have stood the test of time will help us answer them.”

The VIPER team aims to address how frozen water and other resources arrived on the Moon in the first place. They also plan to identify where they came from, how they remained preserved for billions of years, how they escape, and where they go.

VIPER’s Journey Across the Nobile Region

The area VIPER will study in the Nobile region covers an approximate surface area of 36 square miles (93 square kilometers), 10 to 15 miles (16 to 24 km) of which VIPER is expected to traverse through during the course of its mission. During this time, the rover will visit carefully chosen areas of scientific interest that will provide further insight into a wide array of different kinds of lunar environments. The VIPER team will look to characterize ice and other resources in these areas using VIPER’s sensors and drill.

As VIPER moves among each area of scientific interest, it will collect samples from at least three drill locations. Analysis of these samples from a variety of depths and temperatures will help scientists to better predict where else ice may be present on the Moon based on similar terrain, allowing NASA to produce a global resource map. This map, and the other science VIPER will produce, will allow scientists to better understand the distribution of resources on the Moon and help inform future crewed missions to establish a long-term presence on the lunar surface.

Participate in a Reddit Ask Me Anything on our Moon exploration activities Tuesday, Sept. 21 at 4 p.m. EDT:

Learn more about the VIPER mission at: