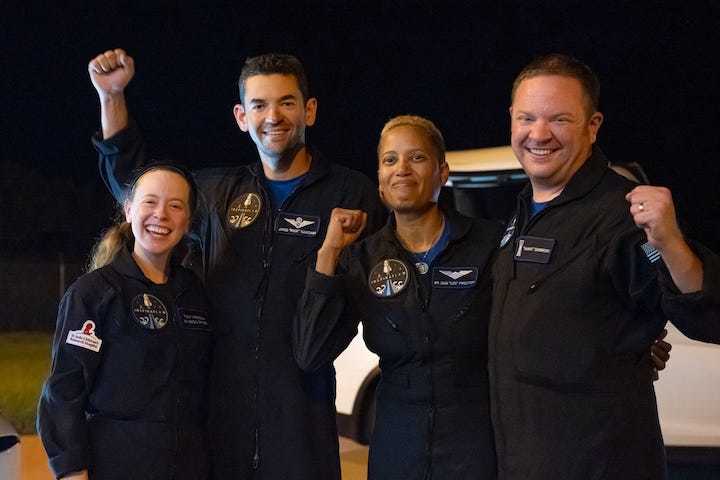 The crew of Inspiration4 at the Kennedy Space Center after returning from three days in orbit. From left: Hayley Arceneaux, Jared Isaacman, Sian Proctor and Chris Sembroski.

Inspiration4 splashed down Saturday night, but the four private citizens who made up its crew say they wish they were still orbiting the Earth.

"That last view of the Earth from the cupola made me emotional because it was just so awe-inspiring, and I knew I'd be thinking about that for the rest of my life," Hayley Arceneaux, the 29-year-old physician assistant from St. Jude Children's Research Hospital who became the youngest American in space as part of the crew, told NBC News anchor Lester Holt in an interview, parts of which aired on the Today show Monday morning.

Arceneaux and her three crewmates made history when they launched aboard a SpaceX Falcon 9 from the Kennedy Space Center Sept. 15 for the first all-private orbital space mission.

Jared Isaacman, a 38-year-old billionaire technology entrepreneur paid SpaceX and undisclosed amount for mission, which he packaged as a fundraiser for St. Jude, where Arceneaux was treated for bone cancer as a child.. The other two crew members were Sian Proctor, 51, a geology professor and science communicator; and Chris Sembroski, 42, a Lockheed Martin engineer and Air Force veteran.

"Each of us have been changed in a way that maybe we didn’t expect," Sembroski said. "And for me it was being able to see the Earth in a way that made me realize there is so much to see in person that I need to go and find those places and explore more."

Traveling to space was a lifelong goal for Proctor, who was a finalist to become a NASA astronaut in 2009.With Inspiration4, she became just the fourth Black woman to travel to space. She said she hoped to offer inspiration to both young girls and older women

"Being able to talk to girls of color, women of color of my experience — and even older women who sometimes think the best part of your life has passed you by as you've gotten older — that you still have lot to learn, a lot to explore and a lot to do," Proctor told NBC.

The mission's goal was to raise $200 million for St. Jude, the famed children's hospital in Tennessee. Isaacman pledged the first $100 million and fundraising efforts associated with the mission generated another $60 million. The $200 million mark was surpassed soon after the crew landed when SpaceX founder Elon Musk announced he would donate $50 million.

Arceneaux not only works at St. Jude, but was treated their for bone cancer as a child.

She told Holt that she was surprised, but also happy, that so many people found her story inspiring.

"Yes, I've had some difficulties in life but I think everyone has in some way," she said. "I think everyone has had to overcome something and I just, I hope that people can look at my story and know that holding on to hope, that there will be better days, is so mportant."

With a price tag of tens of millions of dollars, space travel will remain available to only professional astronauts and the very wealthy for the foreseeable future. But Isaacman hopes that Inspiration4 was the first step in making space travel  realistic for more people.

"I think if orbital space flight is just an exclusive domain of a couple of countries in the select few, I don’t know how far we're gonna get," he told Holt. "So I think having organizations like SpaceX that are working very hard to drive down the cost of space flight, to make it more accessible for others so all of us can go out and journey among the stars."

Arceneaux said she was looking forward to getting back to work and sharing her experience with he young patients. "I'm excited to get back to St. Jude. I want to tell all these kids that if I can do this, they can do this."