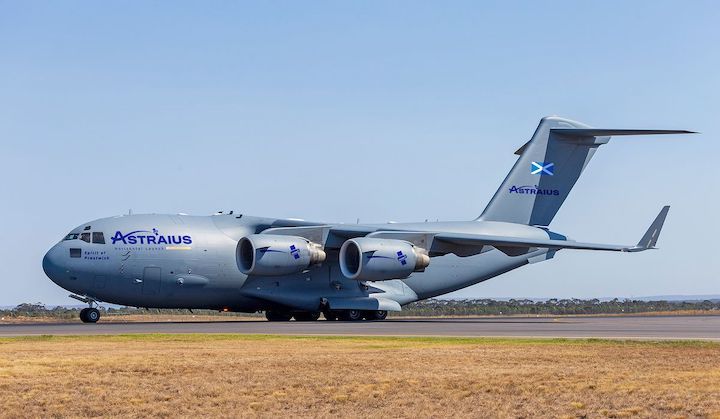 A proposed spaceport in Scotland will offer rocket launches from the cargo bay of military transport planes in competition with Richard Branson’s Virgin Orbit. Prestwick Airport near Glasgow, which is developing the space facility, said Wednesday it signed an outline deal with Astraius, a U.K. startup that aims to parachute rockets from the back of a Boeing Co. C-17 Globemaster plane before theirmotors ignite and they carry satellites to low-earth orbit.
Spaceport sites are planned across the U.K. after regulations permitting space flights and satellite launches came into force in July, with the Department for Transport estimating market opportunities at 4 billion pounds ($5.5 billion) over the next decade. The Prestwick plan is backed by 80 million pounds in local and national funding and aims to tap a local small-satellite manufacturing sector that ranks behind only California, according to the airport’s statement. The Astraius service, planned for 2023, is set to compete with Virgin Orbit, which launches rockets from beneath the wing of a modified Boeing 747 passenger plane and aims to establish a facility at a rival spaceport in Newquay, southwest England, as early as next year. Virgin Orbit completed its first commercial launch in June and plans to go public via a merger with special-purpose acquisition company NextGen Acquisition Corp. II. Air-based satellite launches provide an alternative to ground-based blastoffs offered by Elon Musk’s SpaceX and planned by Amazon.com Inc. founder Jeff Bezos’s Blue Origin.
Quelle: Bloomberg https://www.bloombergquint.com/business/scottish-spaceport-to-launch-rockets-from-military-transport-jet