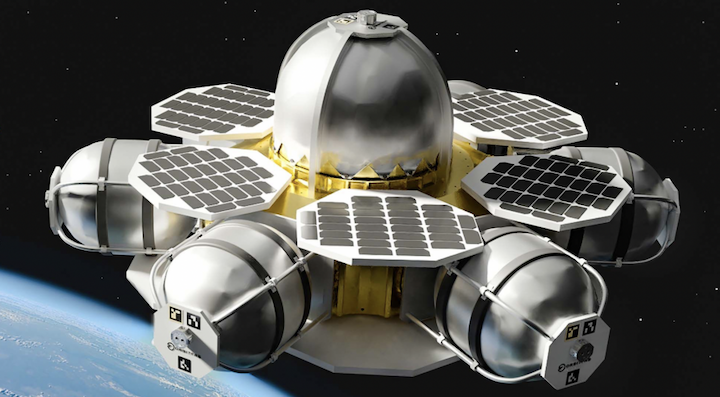 WASHINGTON — Orbit Fab, a startup offering a refueling service in space, will launch a propellant tanker to geostationary orbit on a SpaceX Falcon 9 lunar lander mission projected for late 2022 or early 2023.

“Geostationary orbit is where most of our customers, especially the Department of Defense and intelligence community, are interested in,” Orbit Fab CEO Daniel Faber told SpaceNews.

The tanker will ride as a secondary payload with Intuitive Machines’ NASA-backed IM-2 lunar lander mission. The payload will get to geostationary orbit aboard a Spaceflight Sherpa-ES orbital transfer vehicle using a novel “lunar flyby” trajectory that takes it first around the back of the moon, Faber said. The mission was facilitated by Spaceflight and GeoJump, a new company offering small satellite rideshare services to the geostationary belt.

“Commencing operations in this orbit will be an important milestone for us,” Faber said.

The tanker is being designed to be able to store propellant for up to 15 years, he said.

The plan is to send “fuel shuttles” to orbit over the next couple of years, he said. “Our architecture involves tankers that contain a lot of fuel and fuel shuttles to transfer fuel between the tankers and operational spacecraft.” Orbital propellant depots are one of the key pieces of the space infrastructure needed for economic activities and exploration.

Orbit Fab’s first tanker that is now in low Earth orbit is less than 100 pounds. Faber said the geostationary orbit tanker will be larger and carry more than 200 pounds of hydrazine. This is what customers have asked for, Faber said. “We’ve already got several million dollars worth of contracts from the Space Force and Air Force, who are funding flight qualification of the fueling ports [and efforts to deliver] both hydrazine and xenon.”

Hydrazine fuel will be available for delivery in the geo belt as soon as it arrives but the company will need more time to demonstrate long-term storage capability. “When it’s not making a fuel delivery, we will be parking our tanker a few hundred kilometers away from the geostationary belt so as not to clutter up the orbit,” said James Bultitude, Orbit Fab’s chief engineer.

Faber said the tanker mission with Spaceflight is being internally funded by Orbit Fab. “We will have propellant available for sale and delivery in geostationary orbit.”

Founded in 2018, Orbit Fab is based in California but recently announced plans to move to Colorado. It is venture funded and also has attracted financial support from defense contractors Northrop Grumman and Lockheed Martin.

Satellite-servicing vehicles such as those operated by Northrop Grumman, Astroscale and other companies are viewed as key customers, Faber said. “We see them as tow trucks. We build the fuel supply.” The plan is to be able to deliver fuel to “fully cooperative, fully prepared spacecraft that have nothing wrong with them. If there’s ever any glitches, call the tow truck.”