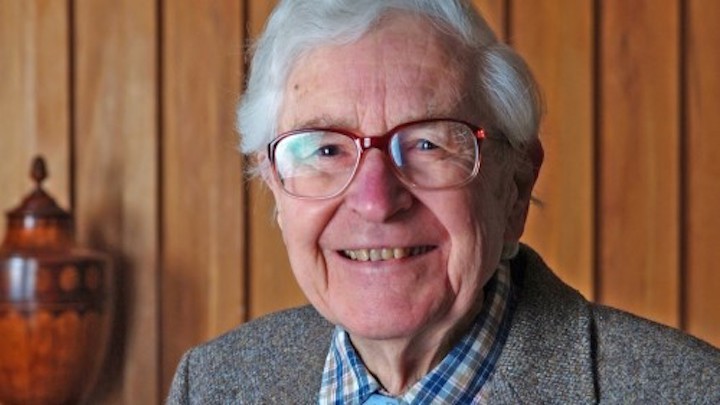 The British Nobel-prize-winning astronomer Antony Hewish has died at the age of 97. He was awarded one half of the 1974 Nobel Prize for Physics for his research in radio astrophysics and his “decisive role in the discovery of pulsars”. He shared the other half with Martin Rylewho bagged the award for the invention of the “aperture synthesis” – a type of interferometry that mixes signals from a collection of telescopes to produce images having the same angular resolution as an instrument the size of the entire collection.

Hewish was born in Fowey, Cornwall, on 11 May 1924 and went to the University of Cambridge in 1942 before joining the war effort working at the Royal Air force Establishment in Farnborough, although he was seconded to the Telecommunications Research Establishment in Malvern working on airborne radar-countermeasure devices. It was at Malvern where he first met Ryle.

Returning to Cambridge in 1946, he graduated two years later and in 1952 was awarded a PhD in physics. He remained at Cambridge throughout his career, becoming head of the Cambridge radio-astronomy group in 1977 and head of the Mullard Radio Astronomy Observatory from 1982 to 1988.

As part of the search for mysterious sources of radio waves known as quasars, in the mid-1960s Hewish designed and constructed the Interplanetary Scintillation Array at Mullard. The array was built on a patch of land two-and-a-half times the size of a football pitch a collection of around 4000 dipole antennas that operated at a radio frequency of 81.5 MHz. Taking around two years to build, it was initially operated by Jocelyn Bell Burnell, who was doing a PhD under Hewish’s supervision.

In the autumn of 1967 Bell Burnell noticed a 0.5 cm-long “scruff” signal showing a series of regular peaks in luminosity. Hewish thought that it may have been a radio flare star – or the product of humans or even aliens – and it was dubbed “LGM-1” for Little Green Man. Yet further observations revealed that it had a pulsed nature and turned out to be the first observation of a pulsar – a rotating neutron star that emits a regular ticking signal of radio waves.

In January 1968 the team submitted a paper about the work – “Observation of a rapidly pulsating radio source” – to Nature (217 709). For the discovery, Hewish was awarded the Nobel prize in 1974, although many felt that Bell Burnell should also have been recognized – an omission that Bell Burnell herself attributes to being a student at the time.

Hewish enjoyed listening to music and sailing and during his undergraduate days was a keen rower. He died on 13 September.