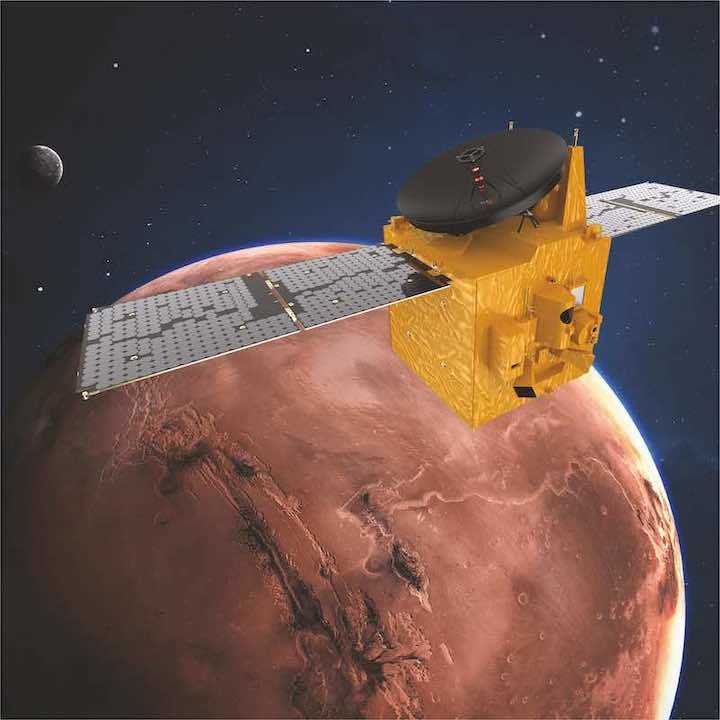 The Emirates Mars Mission (EMM), the first interplanetary exploration undertaken by an Arab nation, achieved another major milestone on February 20th, 2021 with the return of the first science images from the Emirates Ultraviolet Spectrometer (EMUS), one of three science instruments on board the Hope probe. The Mohammed bin Rashid Space Centre  (MBRSC) released these images to mark one month since the Probe successfully entered into orbit around Mars on February 9, 2021.

“We are very excited indeed to be moving into our science orbit and starting the flow of planetary data we aim to gather over the coming Martian year,” said EMM Science Lead Hessa Al Matroushi.

EMUS collected its first series of images from an orbit altitude of 36,000 km. Each false-color image represents light collected at a different ultraviolet wavelength providing information on the composition of Mars’ upper atmosphere. EMUS is the first instrument to orbit Mars with the capability to measure the extreme ultraviolet wavelength region.

The EMUS spectrometer will measure global characteristics and variability of hydrogen and oxygen in the Mars upper atmosphere, right at the edge of space. The images show the measured signal from scattered sunlight off hydrogen and oxygen and emission from carbon monoxide in the Mars thermosphere, produced by the breakdown of water and carbon dioxide in the atmosphere.

“Moments like these, when the first science data comes back from an instrument you’ve been working on for years, are always special. With the EMUS instrument we’ll be able to see how the upper atmosphere of Mars behaves in new ways, and at new wavelengths,” noted Dr. Mike Chaffin, EMUS Instrument Scientist

“There is something unique and special about seeing the unseen universe with an ultraviolet instrument. Seen photons are sweet, but those unseen are sweeter,” said Dr. Justin Deighan, EMUS instrument scientist.

EMUS observations will improve our knowledge of how the upper and lower atmosphere of Mars are connected and how the atmosphere has been slowly lost to space over the history of the solar system.

“I was impressed by how similar these first images compared to our model simulations.  But while we can predict many aspects of the Mars atmosphere, there are many unknowns that will be investigated throughout the mission, such as how the atmosphere has been lost to space over time,” said Dr. Greg Holsclaw, EMUS instrument scientist.

“We have already amassed some 60 gbits of data from Hope’s instruments in the mission so far,” said EMM Science Lead Hessa Al Matroushi. “Alongside early data streams from EMUS and its companion instrument EMIRS, we have also been able to take a range of highly detailed images of the planet using our imager, EXI, helped by the fact that when we’re at our closest point in our orbit, we’re on the sunny side of Mars.

EMUS is one of the three science instruments on board the Hope Probe, developed by MBRSC and LASP engineers and scientists. The EMUS spectrometer, with a wide array of ultraviolet wavelengths, will allow scientists to investigate the composition of oxygen and hydrogen still present in Mars’ upper atmosphere. 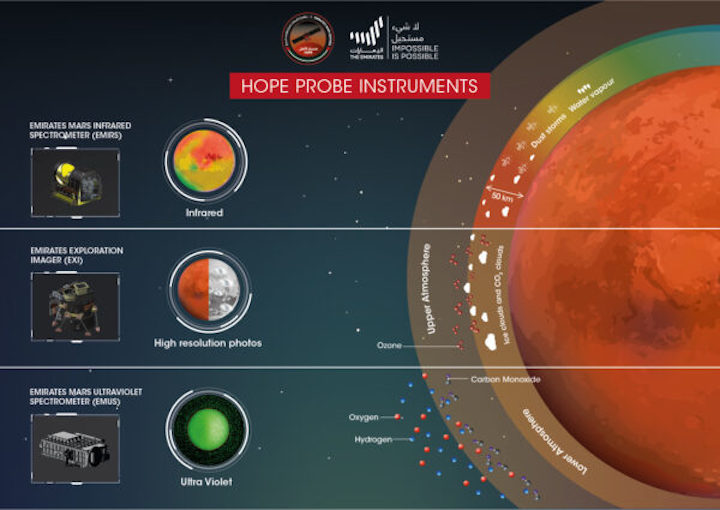 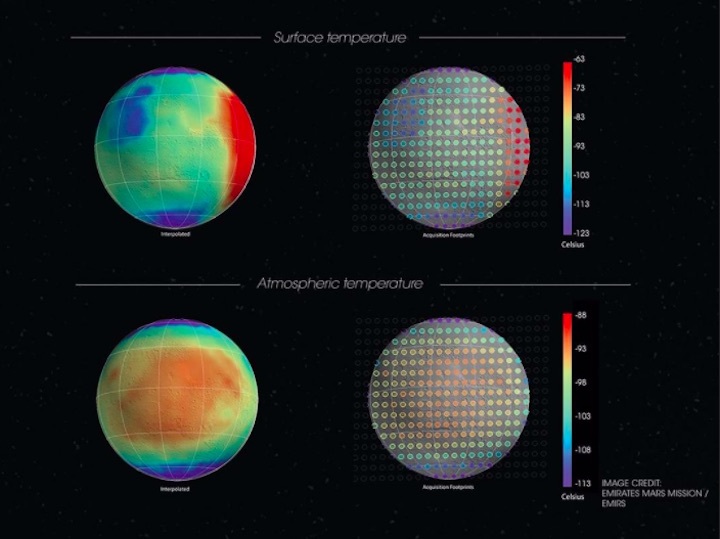 The UAE’s Hope probe will soon perform the first of two manoeuvres to get closer to its science orbit around Mars.

The spacecraft, which reached the Red Planet on February 9, will begin its mission of collecting atmospheric data once it enters the target orbit in April.

On March 23, at 1am Gulf Standard Time, the probe will fire its thrusters for eight to nine minutes to correct its positioning.

For the past few weeks, Hope has been travelling as close as 1,063 kilometres to Mars’ planetary surface and as far away as 42,461 km.

The goal is to reach an elliptical science orbit of 20,000 km to 43,000 km, where it can then spend two years gathering data.

“Our Mars orbit insertion was highly successful and precisely targeted and this has allowed us to plan a reduction in transition to science manoeuvres, and also to move to our science orbit ahead of schedule,” said Omran Sharaf, team leader of the mission.

“We will commence science data gathering earlier in April than we had originally planned, and I think it’s fair to say there is huge excitement now in our science team and among Mars scientists around the world.”

The strategic orbital placement will allow the spacecraft to complete one full circle around the planet every 55 hours and capture a full planetary data sample every nine days.

Several high-resolution, infrared and ultraviolet photos were released earlier this month that measured gases present in the Martian atmosphere.

Hope will study why gases crucial to life are escaping from the atmosphere. It will also trace movement of energy through the atmosphere and the planet’s weather dynamics.

The last manoeuvre before it enters its science orbit is scheduled for April 6.