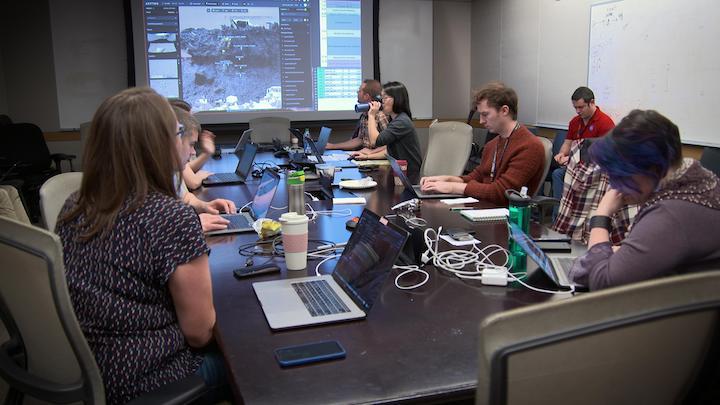 Scientists at NASA's Jet Propulsion Laboratory participate in a training exercise in February 2020. They reviewed images and data sent by a field team in the Nevada desert, discussing where to send their simulated "rover" next. 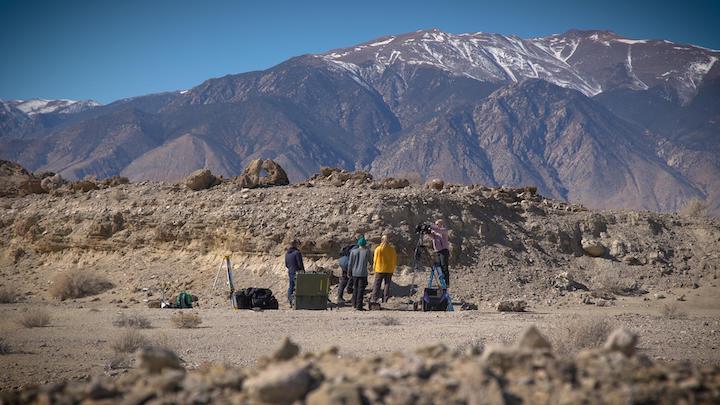 A field team sets up equipment in the Nevada desert in February 2020 as part of a training session for scientists who will work with NASA's Perseverance Mars rover after it lands. Cameras and instruments carried by the field team stood in for an actual rover; the scientists, based in offices around the world, sent commands for images and data, as they will with Perseverance.

Billions of years ago, the Martian surface could have supported microbial life as we know it. But did such life ever actually exist there? NASA and its Mars 2020 mission hope to find out with the Perseverance rover, which launches to the Red Planet this summer.

Scientists have sought answers to astrobiological questions on Earth, studying regions similar enough to Mars to understand what the Red Planet's microscopic fossil record might look like. One research trip late last year involved fossilized microbes in the Australian Outback. Earlier this year, seven mission scientists headed to a dry lakebed in Nevada as 150 worked with them remotely for the Rover Operations Activities for Science Team Training, aka the ROASTT.

Rather than bringing a car-sized rover, the seven field team members stood in for it. Wielding cameras and portable spectrometers during simulated operations spread out over a two-week period, they received instructions from the scientists located elsewhere, just as the rover will after it lands on Feb. 18, 2021.

A seven-person field team served as a simulated rover, carrying cameras and science instruments to the Nevada desert. Meanwhile, mission scientists at institutions like NASA's Jet Propulsion Laboratory in Southern California sent commands for them to take pictures or collect data from the landscape.

Like all Mars rovers, Perseverance will be run by a distributed team of scientists and engineers - some located in the operations center at NASA's Jet Propulsion Laboratory, which leads the new mission, and some located at research institutions around the world. They will discuss where to go, which samples to study, and - for the first time - which rocks to collect in metal tubes for eventual return to Earth for deeper study.

The Nevada exercise not only helped team members practice what to look for with Perseverance; it helped them get used to working with one another and with the rover. The field site was also an opportunity for research: Besides simulating a rover, the field team members were studying the field site, providing insights that could help shape the search for past life on Mars.

If a cliffside seemed promising, scientists on conference lines around the globe debated whether the field team should "drive" closer; if a set of rocks appeared ideal for preserving fossils, they would order close-up images from the field team. A ray-gun-like laser instrument mimicked Perseverance's rock-analyzing SuperCam; another handheld tool shot X-rays like the rover's Planetary Instrument for X-ray Lithochemistry (PIXL) will; a ground-penetrating radar was carted around in what looked like a jogger stroller to peer below the surface, mimicking the Radar Imager for Mars' Subsurface Experiment (RIMFAX).

The field team also had an important low-tech tool: a cheap broom used to sweep away their footprints, both to preserve the Martian feel of the landscape and to avoid providing the remote scientist a sense of scale in the rock images they were providing.

A Patch of Mars in Nevada

Walker Lake is an ideal training ground for spotting ancient microscopic life. The lake once extended much farther than it does today; the parts of it that dried up tens of thousands of years ago are now studded with stromatolites - collections of fossilized microbes and sediment that have hardened into what often look like bulbous, moundlike growths. It remains to be seen whether Jezero Crater, Perseverance's landing site, has anything akin to stromatolites, but it, too, is an ancient lakebed.

Besides helping scientists think about biosignatures, or signs of ancient life, the training also demonstrated how working with Perseverance will take teamwork and careful coordination.

"It's especially important for scientists who are new to Mars rovers," said JPL scientist Raymond Francis, who led the field team. "It's a team effort, and everyone has to learn how their roles fit into the whole mission."

One Rover, Many Decisions

Lisa Mayhew, a geochemist and geomicrobiologist at the University of Colorado Boulder, is one of those newcomers. To study the relationship between water, rocks and microbial life in extreme environments, she's worked with deep-sea remotely operated vehicles, like the Woods Hole Oceanographic Institution's Jason. In places such as the Lost City, located at the bottom of the Atlantic Ocean, she's watched Jason explore craggy mineral towers. Microbes in and on these towers thrive by metabolizing energy-rich gases, like hydrogen and methane, produced from reactions between water and rock. Some scientists think life on Earth may have originated in such places.

Similarly to a Mars rover, Jason sends back images, and its robotic arms can be deployed to move rocks and take samples. But Mars is much farther away than the ocean floor. Only so many commands can be sent to Perseverance each day, and only so much data can be sent back.

That's why every rover mission has to balance the desire to deepen the team's understanding of one site with the need to sample the geologic diversity available down the road.

The Walker Lake exercise underscored for Mayhew just how many decisions go into managing a Mars rover. "While it's similar in many ways to operating and directing Jason, it's happening on a much larger scale and you're pretty clueless until you're actually planning a rover drive," she said. "You have to learn all the different software tools and understand the distinction between different roles."

At the end of the training, participating scientists said they had a much better idea of how a rover team works. What's more, the scientists had chosen a sample that was rich with biosignatures.

"The next time we do this will be on Mars," said JPL's Ken Williford, one of the mission's deputy project scientists. "We've got to get the right samples. Let's bring them back."

Perseverance is a robotic scientist weighing about 2,260 pounds (1,025 kilograms). The rover's mission will search for signs of past microbial life. It will characterize the planet's climate and geology, collect samples for future return to Earth, and pave the way for human exploration of the Red Planet. No matter what day Perseverance launches during its July 17-Aug. 5 launch period, it will land at Mars' Jezero Crater on Feb. 18, 2021.

The Mars 2020 Perseverance rover mission is part of a larger program that includes missions to the Moon as a way to prepare for human exploration of the Red Planet. Charged with returning astronauts to the Moon by 2024, NASA will establish a sustained human presence on and around the Moon by 2028 through NASA's Artemis lunar exploration plans.