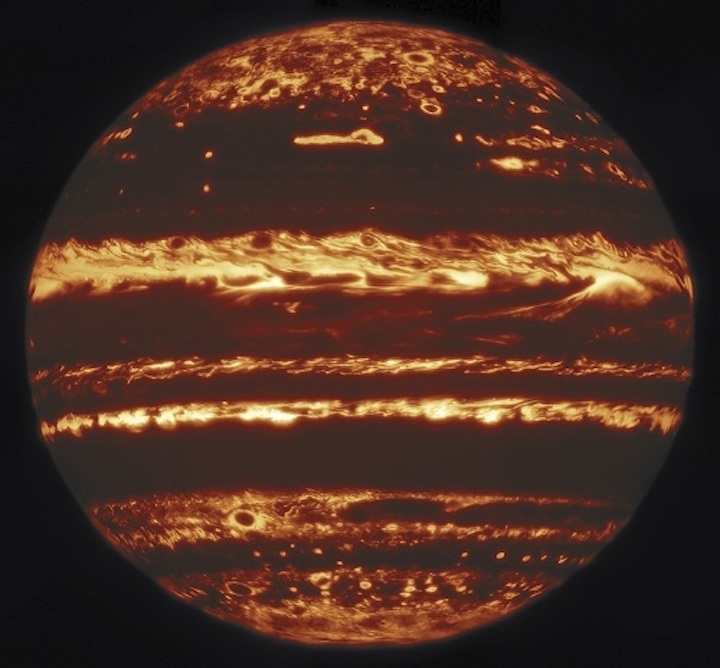 Figure 1. Jupiter seen with Gemini’s Lucky Imaging. This image showing the entire disk of Jupiter in infrared light (4.7 μm) was compiled from a mosaic of nine separate pointings observed by the international Gemini Observatory, a program of NSF’s NOIRLab on 29 May 2019. From a lucky imaging set of 38 exposures taken at each pointing, the research team selected the sharpest 10%, combining them to image one ninth of Jupiter's disk. Stacks of exposures at the nine pointings were then combined to make one clear, global view of the planet. Even though it only takes a few seconds for Gemini to create each image in a lucky imaging set, completing all 38 exposures in a set can take minutes — long enough for features to rotate noticeably across the disk. In order to compare and combine the images, they are first mapped to their actual latitude and longitude on Jupiter, using the limb, or edge of the disk, as a reference. Once the mosaics are compiled into a full disk, the final images are some of the highest-resolution infrared views of Jupiter ever taken from the ground. Credit: International Gemini Observatory/NOIRLab/NSF/AURA M.H. Wong (UC Berkeley) and team Acknowledgments: Mahdi Zamani.

Researchers using a technique known as “lucky imaging” with the Gemini North telescope on Hawaii’s Maunakea have collected some of the highest resolution images of Jupiter ever obtained from the ground. These images are part of a multi-year joint observing program with the Hubble Space Telescope in support of NASA’s Juno mission. The Gemini images, when combined with the Hubble and Juno observations, reveal that lightning strikes, and some of the largest storm systems that create them, are formed in and around large convective cells over deep clouds of water ice and liquid. The new observations also confirm that dark spots in the famous Great Red Spot are actually gaps in the cloud cover and not due to cloud color variations.

Three years of imaging observations using the international Gemini Observatory, a program of NSF’s NOIRLab, have probed deep into Jupiter’s cloud tops. The ultra-sharp Gemini infrared images complement optical and ultraviolet observations by Hubble and radio observations by the Juno spacecraft to reveal new secrets about the giant planet.

“The Gemini data were critical because they allowed us to probe deeply into Jupiter’s clouds on a regular schedule,” said Michael Wong of UC Berkeley, who led the research team. “We used a very powerful technique called lucky imaging,” adds Wong. With lucky imaging, a large number of very short exposure images are obtained and only the sharpest images, when the Earth’s atmosphere is briefly stable, are used. The result in this case is some of the sharpest infrared (4.7 μm) images of Jupiter ever obtained from the ground. According to Wong, “These images rival the view from space.”

Gemini North’s Near Infrared Imager (NIRI) allows astronomers to peer deep into Jupiter’s mighty storms, since the longer wavelength infrared light can pass through the thin haze but is obscured by thicker clouds high in Jupiter’s atmosphere. This creates a “jack-o-lantern”-like effect in the images where the warm, deep layers of Jupiter’s atmosphere glow through gaps in the planet’s thick cloud cover.

The detailed, multiwavelength imaging of Jupiter by Gemini and Hubble has, over the past three years, proven crucial to contextualizing the observations by the Juno orbiter, and to understanding Jupiter’s wind patterns, atmospheric waves, and cyclones. The two telescopes, together with Juno, can observe Jupiter’s atmosphere as a system of winds, gases, heat, and weather phenomena, providing coverage and insight much like the network of weather satellites meteorologists use to observe Earth.

On each of its close passes over Jupiter’s clouds, Juno detected radio signals created by powerful lightning flashes called sferics (short for atmospherics) and whistlers (so-called because of the whistle-like tone they cause on radio receivers). Whenever possible, Gemini and Hubble focused on Jupiter and obtained high-resolution, wide-area maps of the giant planet to augment the Juno observations.

Juno’s instruments could determine the latitude and longitude coordinates of clusters of sferic and whistler signals. With Gemini and Hubble images at multiple wavelengths, researchers now can probe the cloud structure at these locations. By combining these three pieces of information the research team found that the lightning strikes, and some of the largest storm systems that create them, are formed in and around large convective cells over deep clouds of water ice and liquid.

“Scientists track lightning because it is a marker of convection, the turbulent mixing process that transports Jupiter's internal heat up to the visible cloud tops,” explained Wong. The largest concentration of lightning seen by Juno came from a swirling storm called a “filamentary cyclone.” Imaging from Gemini and Hubble shows details in the cyclone, revealing it to be a twisted collection of tall convective clouds with deep gaps offering glimpses to the water clouds far below.

“Ongoing studies of lightning sources will help us understand how convection on Jupiter is different from or similar to convection in the Earth's atmosphere,” Wong commented.

While scanning the gas giant for gaps in cloud cover, Gemini spotted a telltale glow in the Great Red Spot, indicating a clear view down to deep, warmer atmospheric layers.

“Similar features have been seen in the Great Red Spot before,” said team member Glenn Orton of JPL, “but visible-light observation couldn’t distinguish between darker cloud material, and thinner cloud cover over Jupiter’s warm interior, so their nature remained a mystery.”

Now with the data from Gemini, this mystery is solved. Where visible light images from Hubble show a dark semicircle in the Great Red Spot, images taken by Gemini using infrared light reveal a bright arc lighting up the region. This infrared glow, from Jupiter’s internal heat, would have been blocked by thicker clouds, but can pass through Jupiter’s hazy atmosphere unobscured. By seeing these features as bright infrared hotspots, Gemini confirms that they are gaps in the clouds.

“NIRI at Gemini North is the most effective way for the US and the international Gemini partnership investigators to get detailed maps of Jupiter at this wavelength,” explained Wong. Gemini achieved a 500-kilometer (300-mile) resolution on Jupiter. “At this resolution, the telescope could resolve the two headlights of a car in Miami, seen from New York City,” said Andrew Stephens, the Gemini astronomer who led the observations.[1]

“These coordinated observations prove once again that ground-breaking astronomy is made possible by combining the capabilities of the Gemini telescopes with complimentary ground- and space-based facilities,” said Martin Still, an astronomy program director at the National Science Foundation, which is Gemini’s US funding agency. “The international Gemini Partnership provides open access to a powerful combination of large telescopes’ collecting area, flexible scheduling, and a broad selection of interchangeable instruments.”

[1] This corresponds to an angular resolution of the Gemini infrared “lucky imaging” observations down to 0.13 arc-seconds. 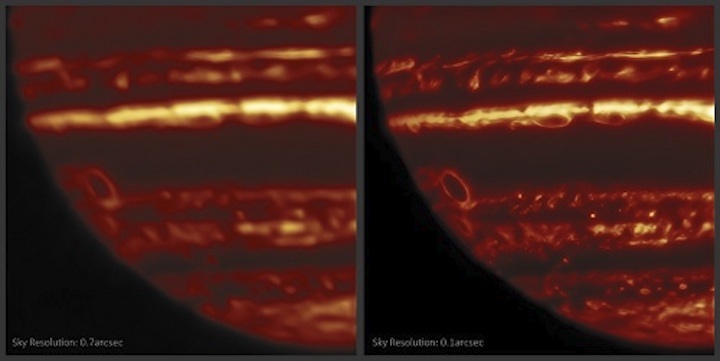 Figure 2. Sharp/Unsharp Lucky Imaging.These images of Jupiter were taken in infrared light (4.7 μm) using the international Gemini Observatory, a program of NSF’s NOIRLab, on 8 April 2019. Because the telescope must observe through the Earth’s atmosphere, any disturbances in the air such as wind or temperature changes will distort and blur the image (left). This greatly limits the resolution the telescope can achieve on a target when only one image is taken. However, during a single night of lucky imaging observations, the telescope takes hundreds of exposures of the target. Some will be blurred, but many exposures will be taken when the view to space is still and clear of disturbances (right). In these lucky images, much smaller, more complex details on Jupiter are revealed. The research team finds the sharpest of these exposures, and compiles them into a mosaic of the whole disk. Credit: International Gemini Observatory/NOIRLab/NSF/AURA, M.H. Wong (UC Berkeley) and team Acknowledgments: Mahdi Zamani. 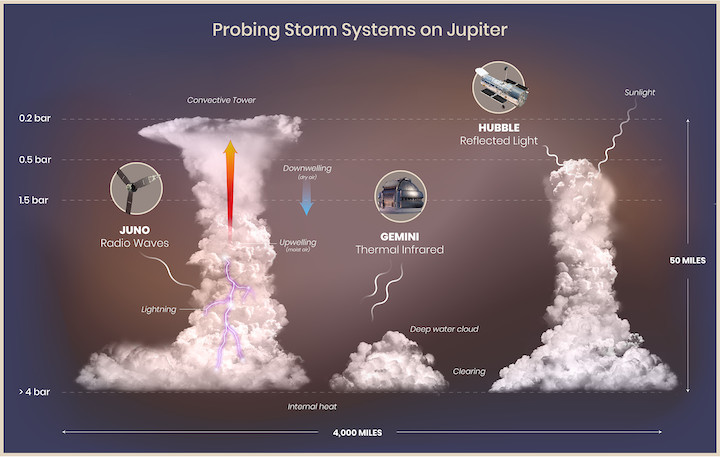 Figure 3. Cloud Structure Illustration. This illustration of lightning, convective towers (thunderheads), deep water clouds, and clearings in Jupiter's atmosphere is based on data collected by the Juno spacecraft, the Hubble Space Telescope, and the international Gemini Observatory, a program of NSF’s NOIRLab. Juno detects radio signals generated by lightning discharges. Because radio waves can pass through all of Jupiter's cloud layers, Juno is able to detect lightning in deep clouds as well as lightning on the day side of the planet. Hubble detects sunlight that has reflected off clouds in Jupiter's atmosphere. Different wavelengths penetrate to different depths in the clouds, giving researchers the ability to determine the relative heights of cloud tops. Gemini maps the thickness of cool clouds that block thermal infrared light from warmer atmospheric layers below the clouds. Thick clouds appear dark in the infrared maps, while clearings appear bright. The combination of observations can be used to map the cloud structure in three dimensions and infer details of atmospheric circulation. Thick, towering clouds form where moist air rises (upwelling and active convection). Clearings form where drier air sinks (downwelling). The clouds shown rise five times higher than similar convective towers in Earth's relatively shallow atmosphere. The region illustrated covers a horizontal span one third greater than that of the continental United States. Credit: NASA, ESA, M.H. Wong (UC Berkeley), and A. James and M.W. Carruthers (STScI). 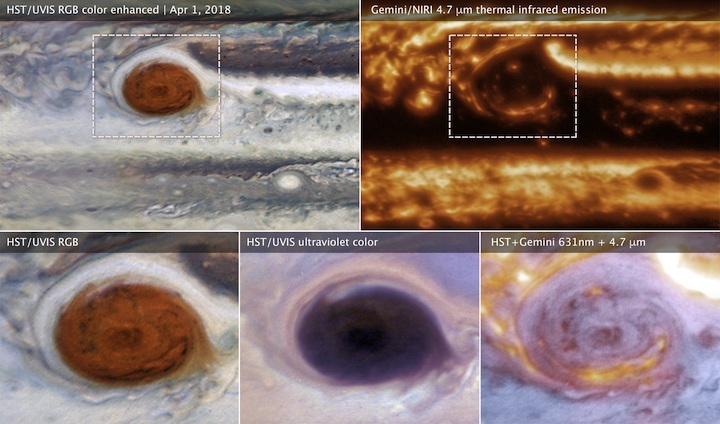 Figure 4. Optical/UV Hubble and IR Gemini Comparison. These images of Jupiter's Great Red Spot were made using data collected by the Hubble Space Telescope and the international Gemini Observatory, a program of NSF’s NOIRLab, on 1 April 2018. By combining observations captured at almost the same time from the two different observatories, astronomers were able to determine that dark features on the Great Red Spot are holes in the clouds rather than masses of dark material. Upper left (wide view) and lower left (detail): The Hubble image of sunlight (visible wavelengths) reflecting off clouds in Jupiter’s atmosphere shows dark features within the Great Red Spot. Upper right: A thermal infrared image of the same area from Gemini shows heat energy emitted as infrared light. Cool overlying clouds appear as dark regions, but clearings in the clouds allow bright infrared emission to escape from warmer layers below. Lower middle: An ultraviolet image from Hubble shows sunlight scattered back from the haze over the Great Red Spot. The Great Red Spot appears red in visible light because the haze absorbs blue wavelengths. The Hubble data show that the haze continues to absorb even at shorter ultraviolet wavelengths. Lower right: A multiwavelength composite of Hubble and Gemini data shows visible light in blue and thermal infrared in red. The combined observations show that areas that are bright in infrared are clearings or places where there is less cloud cover blocking heat from the interior. The Hubble and Gemini observations were made to provide a wide-view context for Juno’s 12th pass (Perijove 12). Credit: NASA, ESA, and M.H. Wong (UC Berkeley) and team.

This video shows one lucky imaging set of observations on Jupiter, taken 8 April 2019, as a timelapse on each pointing of the mosaic (left) used to construct the final full view of Jupiter (right). The power of lucky imaging is clearly shown: some frames are sharp and detailed, while others seem blurred or even unfocused because of changes in Earth’s atmosphere above the telescope. By combining only the sharpest images in each pointing, astronomers can dramatically reduce the adverse effects of Earth’s atmosphere on the quality of the images. Also note that the features on Jupiter noticeably move as each set of images is taken. Astronomers correct for that movement before stitching the clearest images together into a sharp view of the full planet. Credit: International Gemini Observatory/NOIRLab/NSF/AURA, M.H. Wong (UC Berkeley) and team Acknowledgments: Mahdi Zamani.