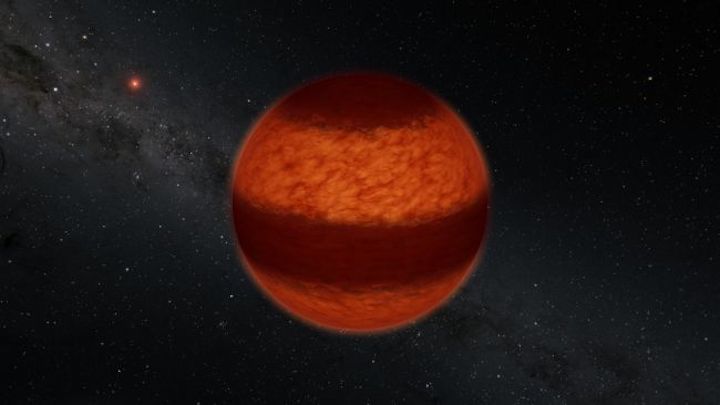 Artist’s illustration of the brown dwarf Luhman 16A. Astronomers have inferred the presence of cloud bands on Luhman 16A using a technique called polarimetry, in which polarized light is measured from an astrophysical object much like polarized sunglasses are used to block out glare. This is the first time that polarimetry has been used to measure cloud patterns on a brown dwarf.
(Image: © Caltech/R. Hurt (IPAC))

Bold banding may be a common feature of brown dwarf skies.

Scientists have spotted evidence of Jupiter-like stripes in the thick atmosphere of a nearby brown dwarf, a new study reports — and this evidence was gathered in a novel way.

Brown dwarfs are bigger than planets but not big enough to host fusion reactions in their interiors. For this reason, these curious objects are also known as "failed stars."

NASA's recently retired Spitzer Space Telescope previously detected banding patterns on multiple brown dwarfs, by tracking in detail how the objects' brightness varied over time. But in this new study, scientists inferred banding via polarimetry, the measurement of polarized light.

Polarized light oscillates in the same direction rather than in multiple, random avenues the way "normal" light does. Polarimetric instruments take advantage of this alignment, much as polarized sunglasses do to reduce the glare of light from Earth's star.

The study team used a polarimetric instrument on the European Southern Observatory's Very Large Telescope (VLT) in Chile to study the brown dwarf Luhman 16A, which is about 30 times heftier than Jupiter. The failed star is part of a brown-dwarf binary; it and its similar-sized partner, Luhman 16B, are the nearest such pair to Earth, a mere 6 light-years away.

The VLT instrument, known as NaCo, detected an excess of polarization in the brown dwarf's light. That's a strong indication of atmospheric banding, researchers said. After all, the light was unpolarized when it was first emitted deep within Luhman 16A, becoming polarized by scattering off haze particles high in the brown dwarf's skies. In a uniform, unbanded atmosphere, this polarization would average out into an unpolarized glow, Caltech representatives explained in a video about the new results. 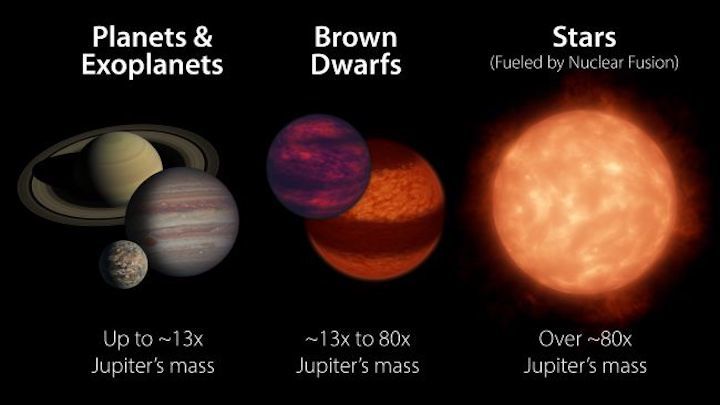 "Polarimetry is the only technique that is currently able to detect bands that don't fluctuate in brightness over time," study lead author Maxwell Millar-Blanchaer, a postdoctoral astronomy researcher at the California Institute of Technology (Caltech) in Pasadena, said in a statement. "This was key to finding the bands of clouds on Luhman 16A, on which the bands do not appear to be varying."

The team's models also show that Luhman 16A probably has patches of very turbulent weather, as Jupiter and other gas-giant planets do.

"We think these storms can rain things like silicates or ammonia," study co-author Julien Girard, of the Space Telescope Science Institute in Baltimore, said in the same statement. "It's pretty awful weather, actually."

The new study marks the first time polarimetry has been used to understand clouds on an object beyond the solar system, team members said. Similar techniques can be used to study other brown dwarfs, and next-generation telescopes in space and on the ground could bring exoplanets into play as well. Polarimetry can help characterize planetary surfaces, potentially allowing scientists to spot liquid water on some alien worlds, study team members said.

"Polarimetry is receiving renewed attention in astronomy," co-author Dimitri Mawet, an astronomy professor at Caltech and a senior research scientist at the Jet Propulsion Laboratory, which Caltech manages for NASA, said in the same statement.

"Polarimetry is a very difficult art, but new techniques and data analysis methods make it more precise and sensitive than ever before, enabling groundbreaking studies on everything from distant supermassive black holes, newborn and dying stars, brown dwarfs and exoplanets, all the way down to objects in our own solar system," Mawet said.

The new study has been accepted for publication in The Astrophysical Journal.