NASA and SpaceX are preparing to launch astronauts from U.S. soil for the first time in nearly a decade. The collaboration is designed to give NASA more flexibility when it comes to launching crewed missions.

When the agency’s storied shuttle program came to an end in 2011, it left NASA dependent upon Russian rockets as its sole means of transporting astronauts to and from the space station. But the arrangement, which costs NASA roughly $85 million per seat, was always intended as a temporary solution.

NASA wanted to support a burgeoning commercial market, so it turned to private industry to build its next-generation space taxi. To that end, in 2014, the agency selected two companies — SpaceX and Boeing — to transport future crews. Each company would design and build its spacecraft capable of carrying humans. Six years later, SpaceX is set to become the first commercial company to transport astronauts, as its inaugural crewed flight prepares to take off on May 27.

The mission, known as Demo-2, is a flight test that will be used to certify the Dragon spacecraft for routine astronaut transport to and from the space station. During the mission, astronauts Bob Behnken and Doug Hurley will pilot the craft to the space station, where it will dock itself to the orbital outpost. 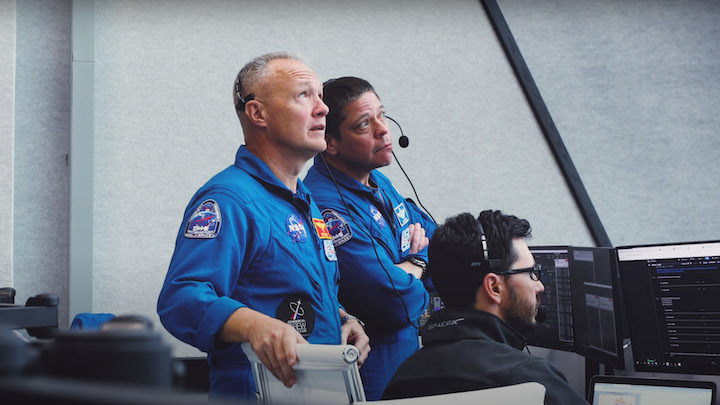 Their time on station is still to be determined, but the duo will make the most of their orbital stay. Not only will they evaluate how Dragon performs at different stages of the mission, but they will also assist fellow NASA astronaut Chris Cassidy with routine maintenance and station keeping.

Once Crew Dragon has been cleared to ferry people regularly, it will give NASA the flexibility to carry out missions of many different durations. To date, crews have spent anywhere from a couple of weeks in space, all the way up to a year. Their time on orbit is typically limited by the spacecraft that brought them, but by having multiple vehicles capable of flying to and from the space station, gives agencies around the world greater flexibility in mission planning.

Currently, NASA is in talks to purchase one more seat on a Russian Soyuz that would fly this fall. As it stands now, Chris Cassidy is the sole NASA astronaut on station, joined by two Russian colleagues. However, that leaves the station understaffed. Simply maintaining the orbital outpost is more than one crew member can handle. (A full space station crew is six.)

Behnken and Hurley are scheduled to launch on May 27 and will stay on station for as many as 110 days. That’s because their ride is only certified to stay in space that long. The harsh space environment wears on hardware, and the Crew Dragon’s solar arrays contain sensitive electronics that have a limited space life.

So what happens when Behnken and Hurley come home? At this point, the schedules are a little unclear, but Cassidy could remain on station by himself until the next crew can launch. While preparing for Demo-2, SpaceX is currently finishing construction on the capsule that will carry its first official crew. Four astronauts will fly on Crew Dragon sometime late this year or early next year, providing a fresh batch of astronauts.

In the meantime, NASA wants to make sure it will be able to have access to the space station, so it’s in talks with Roscosmos to buy one more seat. After that deal is made, NASA has a much different idea for the future of its partnership with the Russian space agency. During a series of briefings in advance of Demo-2, NASA administrator Jim Bridenstine expressed how he hoped in the near future that NASA and Roscosmos could set up a trade agreement.

This would mean that U.S. astronauts would still fly on a Russian Soyuz and vice versa. Only instead of money exchanging hands, the two agencies would simply trade seats on each other’s vehicles.  The first international partner to fly on a Crew Dragon will be Soichi Noguchi of the Japanese Space Agency (JAXA), who will join NASA astronauts Victor  Glover, Mike Hopkins, and Shannon Walker as part of the Crew-1 mission.