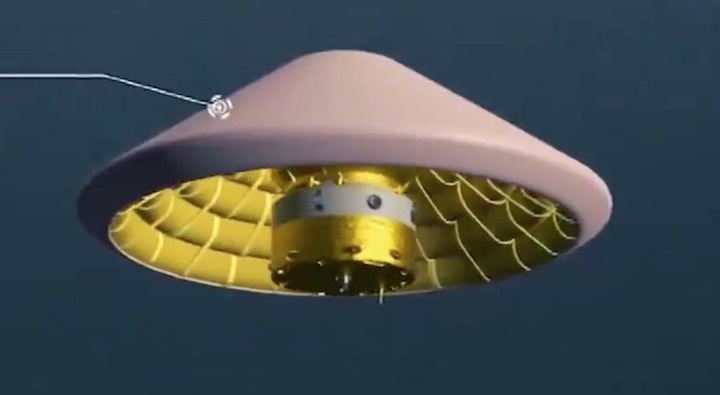 An experimental cargo return craft launched as a secondary payload on China’s Long March 5B rocket malfunctioned during its return to Earth on Wednesday, while an unpiloted prototype for the country’s next-generation crew capsule continues raising its orbit before its scheduled landing Friday, Chinese officials said.

Fitted with an inflatable, low-mass heat shield, the re-entry module operated “abnormally” during the return process, according to the China Manned Space Agency.

The agency said engineers are analyzing data from the spacecraft to determine what went wrong. The cargo return vehicle is designed to ferry equipment and experiment specimens back to Earth from China’s planned space station, which program officials say is set to be competed by 2022.

The Flexible Inflatable Cargo Re-entry Vehicle was supposed to deploy its umbrella-shaped heat shield to a diameter of nearly 10 feet, or 3 meters, before falling back into Earth’s atmosphere. A landing module protected by the heat shield was expected to parachute to a landing in northwestern China’s Inner Mongolia autonomous region Wednesday after a 19-hour flight in orbit.

The cargo return capsule launched Tuesday on top of China’s powerful Long March 5B launcher from the Wenchang launch center on Hainan Island in the southern part of the country.

The primary payload on Tuesday’s Long March 5B launch was a test model for a next-generation spaceship to carry Chinese astronauts to the country’s space station, and eventually the moon.

The Shenzhou crew craft can return only a limited amount of cargo, and China’s Tianzhou supply ship for the country’s planned space station is not designed to bring any cargo back to Earth.

China’s next-generation crew carrier is also reusable for up to 10 flights, with a detachable heat shield built to handle higher-temperature returns through Earth’s atmosphere, such as those a capsule would encounter on a re-entry from a lunar mission.

The Xinhua news agency reported the primary purpose of the crew capsule test flight is to verify the ship’s re-entry technologies, such as its heat shield and recovery system. The capsule will return under parachutes and inflate airbags to cushion its landing on solid ground.

The Shenzhou landing module also returns under parachutes, but uses rocket thrusters to soften the blow of landing. That makes for a rougher ride for passengers.

With its propulsion and power module, the crew spacecraft measures nearly 29 feet (8.8 meters) long. When the capsule launched, it weighed around 47,600 pounds (21.6 metric tons) fully loaded with equipment and propellant, according to the China Manned Space Engineering Office, or CMSEO.

Chinese officials said earlier this year that the crew capsule on the Long March 5B test flight will be loaded with 10 metric tons (22,000 pounds) of propellant, enabling extensive maneuvers in orbit. The fuel load will also match the spacecraft’s weight to the expected launch weight of the Tianhe core module for China’s space station, which is scheduled to be completed in 2022.

China launched a reduced-scale crew module on an unpiloted test flight in 2016.

Chinese state media reported Wednesday that the prototype crew ship is performing as designed in orbit. The spacecraft unfurled its power-generating solar panels, a communications relay antenna, and has adjusted its orbit four times.

Power supply and control links between the spacecraft and ground teams were normal, officials said.

As of Wednesday, the spacecraft had raised its orbit to reach an apogee, or high point, of around 3,100 miles (5,000 kilometers), with an inclination of 41 degrees. Three additional orbit-raising maneuvers will propel the spacecraft into a more elliptical orbit with a higher apogee, setting up for a high-speed re-entry Friday to test the ship’s heat shield before a targeted landing in northwestern China.

The mission profile is similar to the flight plan for NASA’s Orion spacecraft on its Exploration Flight Test in 2014.